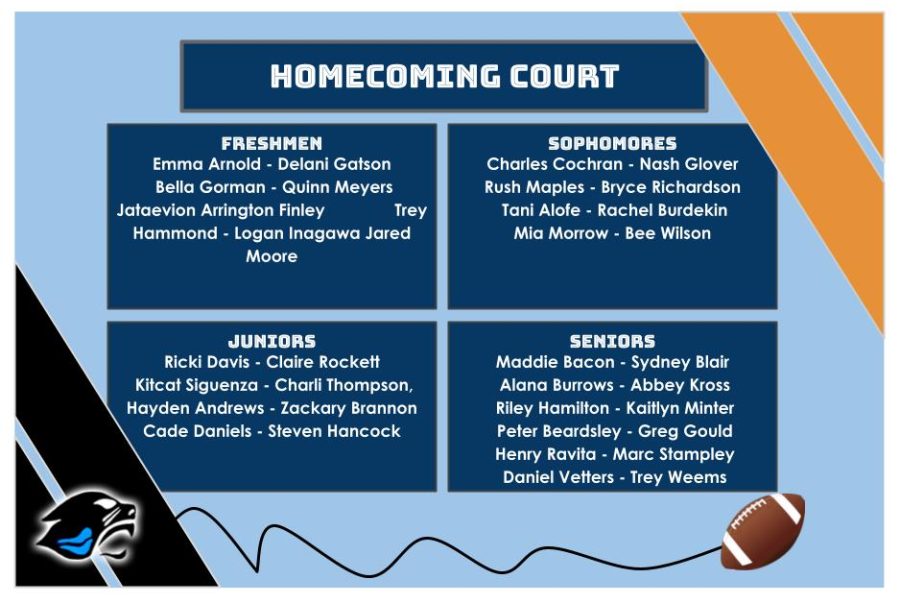 This year’s homecoming is coined “Madness at the Mill” for its spooky Halloween theme.

The week of October 25-29 will include the typical dress-up days, parade, football game, and dance.

Each dress-up day follows the spooky motif. Monday’s decade day is coined “Ghosts of the Past.” Ninth grade has the 1950s, tenth has the 1960s, eleventh has the 1970s, and twelfth has the 1980s. Tuesday is “Visitors Beware,” also known as Tacky Tourist.

Generations day is on Wednesday and has been dubbed “Existential Crisis Day,” in which ninth grade follows the theme of toddlers, tenth has college, eleventh has Peachtree City parents, and twelfth has the elderly. Thursday is costume day, previously known as character day. Friday wraps up the week as spirit day for the underclassmen, while seniors will follow tradition and wear togas.

Two new events follow the traditional homecoming parade that goes from Braelinn Elementary down Robinson Road and Redwine Road to Panther Path. The Panther Athletic Advisory Board is hosting a Trunk or Treat in the teacher parking lot from 7 to 8 p.m. with an orchestra concert in Duke Auditorium starting at 6:30 p.m.

On Friday, Starr’s Mill hosts McIntosh at 7:30 p.m. Homecoming king and queen will be crowned during halftime of the game.

The week of festivities and celebrations ends with the homecoming dance from 7-10 p.m. Saturday night in the gym.