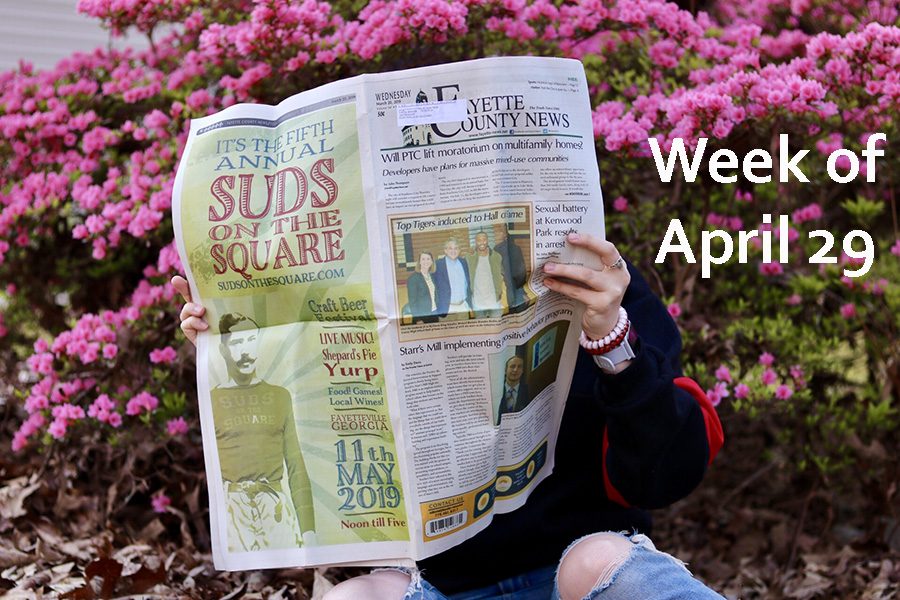 May has arrived this week bringing three things with it. For starters, Milestones came to the Mill and students have never wanted to leave school more. Only three more weeks, hang in there. Spring sports are also wrapping up with soccer and lacrosse advancing in playoffs. And the third-to-last KIC is here. In fact you can see it if you just scroll down. So without further ado, with a civil war in Venezuela, the death of a Wookie, and a new name for Sanford Stadium, The Prowler has the stories.

On Monday, Beto O’Rourke released his first major policy proposal for the presidential campaign. The policy outlined was about a $5 trillion plan to resist climate change. The proposal was noteworthy for mentioning about the political environment and voters’ priorities.

O’Rourke focusing his first formal proposal on climate change was noteworthy since he has been criticized for his lack of a solid platform before. The Democrats have never made a decisive issue on this topic before although they agreed on climate change for a long time.

The plan calls for net-zero emissions by 2050, which would recommit the United States to the Paris Agreement and restore Obama-era power plant regulations and fuel standards. While there were some disputes between the Democrats, they were just glad that climate change was being acknowledged.

As of Tuesday, the situation in Venezuela escalated on an unexpected scale. Demonstrations in Caracas turned violent with 52 injured during the clashes. This was part of opposition leader Juan Guido’s plan to assert himself as the leader of the country. The months-long power struggle has led up to this point of revolution and increased violence.

As of Friday though, the situation has not improved in the country, and now there are many accusations flying around the whole situation involving Cuba, Russia, and the United States. This week, some congressman voiced their opinion for the United States to get involved in the conflict, but as of now, government officials have only had a close eye on what’s happening and have not decided to interfere.

Even now, Maduro claims that the citizens are attempting to overthrow a “legitimate” government and refuses to give up power. This will likely develop much more in the next week, with updates available on CNN.

The field at the University of Georgia’s Stanford Stadium is getting named after coach Vince Dooley. The approval of the name will be announced this month. If the new name is approved, the field will be revealed to the public on Sept. 7 at the first game of the fall season.

Dooley coached the Georgia Bulldogs from 1963 to 1989 and led the team to a national championship and six Southeastern Conference Championships. He also coached Herschel Walker, a Heisman Trophy winner.

Dooley shared that it is a great tribute to his family and the players that he coached throughout the years. Besides the Sanford Stadium field, there are also various academic buildings named in Dooley’s honor.

Actor who played Chewbacca passes away (5/2)

Peter Mayhew, the actor who played Chewbacca in the Star Wars movies, passed away at age 74. His family released a statement Thursday on his Twitter. No cause of death was mentioned.

Mayhew apparently had a spinal surgery to improve his mobility. He left behind his three children and his wife. “We were partners in film and friends in life for over 30 years and I loved him,” Harrison Ford said. He worked with Peter Mayhew for over 30 years during the run of Star Wars movies.

He was said to have been a great person and did good with his fame. His foundation was dedicated to the alleviation of pain, disease, and suffering. Mayhew’s character had a huge impact on the Star Wars franchise. His family stated that to him, “the ‘Star Wars’ family meant so much more to him than a role in a film.”

Today, the murder of a Coweta County Sheriff’s Deputy was released to the public by Fayette County News. The murder of the officer took place on April 30 at around 9:41 p.m. while the law enforcement official was undercover.

Edmond Irvin, the victim of the assault,  was 25-years-old.. The gunman, Danny Long, was Irvin’s cousin. It is still unclear as to why Long killed his relative with a handgun, but what is known is that the Georgia Bureau of Investigation is on the case.

Long is charged with one count of murder and one count of terroristic threats. The Coweta County Police Department and others surrounding Fayetteville have shown their support for the fallen officer.