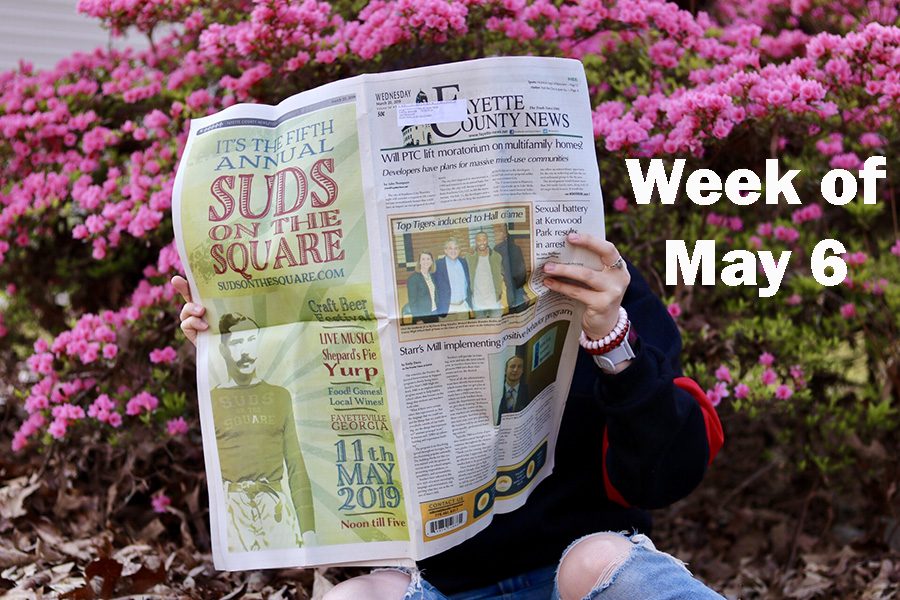 Advanced Placement testing began this week. With the bells turned off to help testers focus and students studying away, the halls have gone quiet. Even most of the parking lot is vacant as testers leave school early after enduring their exams. One thing that has not grown quiet, however, is the news. With the birth of a royal baby, a donut stacking world record, and a new hotel in Fayette County, The Prowler has the stories.

Late Monday night, Meghan Markle, the Duchess of Sussex, gave birth to a baby boy. Prince Harry was able to barely contain himself and seemed unable to stop himself from grinning. “It’s been the most amazing experience I can ever possibly imagine,” he said.

The Duchess was reported to be hoping for a home birth. However, she was reported to have given birth in the hospital since she had passed her due date. Although it is a royal baby, it is unsure whether the newborn, who falls behind Harry in the line of succession, will receive a royal title.

The world was not just drawn into the Duke and Duchess of Sussex child’s birth itself. People are interested in their son being the first multiracial baby in the monarchy’s recent history. The baby is half American which brings a change for the oldest of houses.

On Tuesday, Georgia Governor, Brian Kemp, signed one of the most restrictive abortion laws in the nation. This new law will effectively ban abortion after six weeks of pregnancy, which is usually when the doctors can start detecting a fetal heartbeat.

Georgia is the fourth state to enact the fetal heartbeat law. Just like other states, the pass of this law is expected to face a swift legal challenge. The supporters hope this will lead to a re-evaluation on the landmark Roe v. Wade ruling from 1973 which made abortion legal nationwide.

The fetal heartbeat law will be put into effect in 2020, prohibiting most abortions once doctors can sense a fetal heartbeat. Exceptions are allowed if the abortion is needed to prevent death or serious harm to the woman. It will also be possible in cases of rape or incest with a police report.

A Jewish group of people in South Africa broke the Guinness World Record for the tallest stack of donuts ever recorded. The stack of donuts was reviewed by officials, and turned out to be four feet, 11.84 inches tall and consisted of 3,100 donuts in total.

The organizers of the construction of the pile claimed that they had used different software products to figure out the structural integrity of the tower. Additionally, they consulted both an architect and an engineer to guarantee that the tower would not collapse on itself.

The pyramid-shaped tower was disassembled and the donuts were distributed to members of the Jewish Life Center in Johannesburg. They donated the remaining donuts to the charities titled The Jewish Helping Hand and Yad Aharon.

Last month, a shooting resulted in the death of Dekalb resident Thedarious Mitchell. It is unclear as to why the shooting occured, but it is known that Christopher Sellers was the gunman. The incident took place close to Decatur on Glenfair Road.

After a month following the event, the specifics of the shooting still haven’t been released to the public. The only thing law enforcement can currently disclose is the fact that Sellers is “armed and dangerous”. As for today, Sellers is still on the run from the law.

Sellers is approximately a 6-foot tall African American man weighing 196 pounds. If anyone has any information about his whereabouts, his plans, or any other information that would be helpful to law enforcement, call Crime Stoppers Atlanta at 404-577-8477. The calls can be anonymous, and the reward for information is up to $2,000.

The City Council has recently passed a new proposal allowing a new hotel to be built in Peachtree City. The Council approved the spot where an 107-room hotel will be built. This will be where Widget Drive connects Ga. Highway 74 South to TDK Boulevard. This is behind the Pit Stop, owned by Mike Hyde.

The proposal rezones a 5.8-acre tract on Exchange Place/Widget Drive from General Industrial to Limited Use Commercial. The Planning Council and the staff both recommended denial for the proposal, but the vote remained unopposed.

This hotel would be aimed at business workers and travelers who visit town. The rooms will be equipped with a kitchen and working space. The Council wants to continue with development throughout the city.