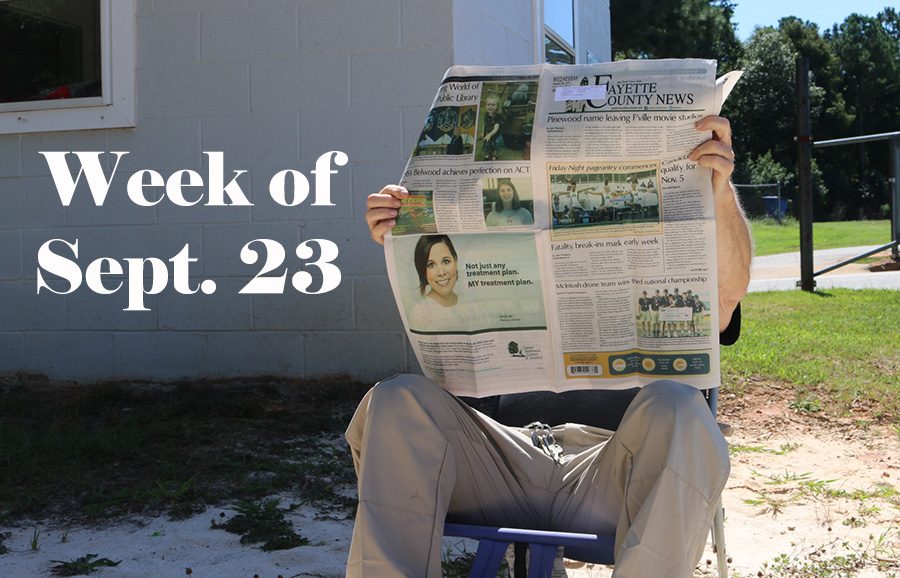 This week, we entered the first official week of autumn. Although the weather is still in the 90s in the late afternoon, students have begun to embrace the season change by wearing sweaters, drinking pumpkin spice lattes, and making Pilsbury cookies. While the season changes four times a year, the headlines change every single day. With a man being tasered, the French President dying, and tariff cuts, The Prowler has the stories.

The United States and Japan have made a deal that cuts tariffs on industrial and agricultural products. President Donald Trump and Japanese Prime Minister Shinzō Abe announced the trade agreement during a meeting with the United Nations General Assembly.

Japan wanted to pursue a deal with the U.S. to escape threats made to take away tariffs on imports of automobiles and auto parts. To get out of that threat, Japan pushed the U.S. to a provision that would allow Tokyo to reimpose agriculture tariffs. The agreement won’t need congressional approval, but it will go into effect as soon as Japan’s legislature approves it.

The agreement is only the first step as more will be negotiated with Tokyo. Japan will reduce tariffs on beef and pork. Sweet corn, blueberries, cranberries, potatoes, almonds, and other U.S. farm goods will be deliberately eliminated from the tariff.

Last Friday in Henry County, 24-year-old Fernando Rodriquez was tasered by three officers. A call was made, which explained that a naked man was walking down the street outside of a music festival.

Tyisha Fernandez, one of the witnesses, was in her apartment during the event. She explained to Channel 2 that she didn’t understand why three officers had to taze him. According to her, Rodriquez was not naked when the cops arrived outside their apartment.

According to the officers, he would not cooperate with their demands. He soon became combative with the officers, and then was tased. He was rushed to Piedmont Henry Hospital where he later died. Doctors say his death was due to the incident. The case is currently being investigated by the Georgia Bureau of Investigation, and information will be presented to the district attorney who will make decisions on what to do next.

On Wednesday night, an 11-year-old boy drove 200 miles in a stolen car to meet up with a stranger. The boy had met this person on the app Snapchat and was planning to live with him in Charleston, South Carolina.

The boy had pulled up next to the officers in downtown Charleston. He told the officers that found him that he had gotten lost when the tablet, which he was using as a GPS at the time, had lost signal. The officers then found out the child’s name and that he had stolen the car from his older brother.

The boy had been reported missing by his father in Simpsonville when the officers got in contact with him. The tablet he had been using has been collected by the police for analysis. The boy is now safe and back with his family.

September 26, 2019, marks the death of former French President Jaques Chirac. In recent years he had suffered memory loss and was rarely seen in public, but he died at age 86. Chirac will be remembered for his political prowess and how he never discounted the obstacles of the common man.

Although living a privileged life, Charic had many common jobs, including sailing. He volunteered for the French Army in 1956, but his interest in politics pushed him to become one of the youngest government ministers in France. In 1995, Charic’s career was especially successful during his term of presidency, and during his second term in 2002.

Chirac suffered a minor stroke in 2005, and his age denied his ability to lead, ending his term in 2007. Less than one in five people approved of his presidency during this time, a record low. For years after, he was plagued with corruption charges. Despite this, Chirac remains one of the most popular figures in France.

A 16-year-old student at McIntosh High School has been apprehended by local law enforcement Wednesday night and has been charged with terroristic threats and for the possession of THC oil. The student was overheard hinting that he would shoot up the school, targeting multiple faculty members.

“The juvenile suspect admitted to investigators that he made the alleged statements,” a Peachtree City Police Department spokesperson told The Citizen. “However, he claimed them to be in a joking manner and that he had no intentions of following through with the threats.”

The current status and identity of the male McIntosh student is unknown to the public. However, the individual was arrested on the night of Sept. 25 after the resource officer was given a tip about a possible threat.