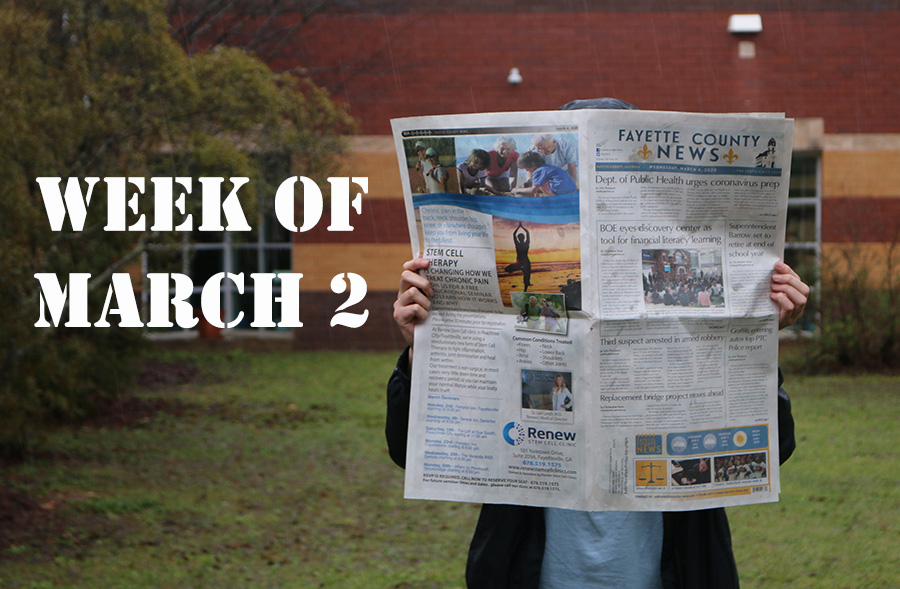 Starr’s Mill students gathered this week to see the drama department’s production of “Bye Bye Birdie.” Throughout the halls, bright blue shirts and posters can be found left and right. In addition to the bright production, Friday greeted students with the bright sun. But not all of this week’s headlines have brought joy. With tornadoes, theft, and the Coronavirus, The Prowler has the stories.

There have officially been four more deaths due to the Coronavirus, putting the number of fatalities at six in the U.S. All four deaths were women in their late 70s and 80s. The deaths were all in the Washington state area.

According to Jeffrey Duchin, a health officer in King County and Seattle, five of the deaths were in King County. The other was in Snohomish County. Researchers say the virus was more than likely in the area for a while before detected.

To avoid the virus, the King County Public Health Department suggested avoiding crowded places, “especially if you are over 60, or have other chronic health conditions such as diabetes, heart disease, lung disease, or a weakened immune system.”

Tennessee and its capital city, Nashville, were hit with a wave of disaster after two or more tornados hit them in the early hours of Tuesday morning. Significant damage was done all around Nashville and the surrounding counties.

The tornadoes hit around 1 a.m. while many people were asleep. The tornadoes ripped through roofs and houses, leaving a wake of destruction throughout the counties. During the night police answered around 50 calls of people being in a dangerous situation.

There have been 21 confirmed deaths in the areas around Nashville due to these disasters. Crews continued to look for bodies and survivors under the rubble of the city. Many schools were out for Super Tuesday, but some announced they would remain closed for the next few weeks due to severe damage.

Last week, two burglaries occurred in the Peachtree City area with both cases consisting of workers’ belongings being stolen. Currently, no arrests have been announced by the police.

The first occurrence took place on Feb. 28 at the Peachtree City Shopping Center located off of Highway 54. Officers responded and arrived at the scene at 5:15 p.m. The unknown suspects entered the office of the store where an employee’s purse was then stolen.

A similar robbery took place at a business near Market Place Boulevard the next day. Police officers dispatched to the area at 9:43 a.m. The officers reported that two females were to blame for the incident. One of the suspects stole an employee’s credit card while the second suspect stayed out front as a distraction.

Cobb County law enforcement has released to the public that the woman who accidentally killed River Ridge High School student Cameron S. Clason has turned herself in. The car wreck took place Feb. 22 at approximately 4:30 p.m.

Clason, who was reportedly riding a black Suzuki motorcycle at the time of the accident, was driving down Old Mountain Park Road when 21-year-old Genesis Leiani Lugo blew through a yield sign and gave the 18-year-old no time to react.

Lugo has now been charged with vehicular homicide and failure to yield. It is currently uncertain how long Lugo will spend behind bars.

Sheila Tyson was one of the millions of black Super Tuesday voters who were the key to Joe Biden’s victory. In 14 states, preliminary voting has started. Biden has emerged victorious in 10 of them. Many black voters have described him as the practical choice.

Tyson lives in Birmingham and has witnessed Biden’s staff meet with black voters to talk about their top priorities. He also accepted a packet from activists which outlines their concerns to help with his campaign.

Tyson believes Biden has direct knowledge of the president’s seat and thinks he will succeed to clean up the mess left by current President Donald Trump. She trusts that Biden is the candidate with the right experience and appeals to the widest cross-section of Democrats.

To many black voters, he is President Barack Obama’s forever Vice President.