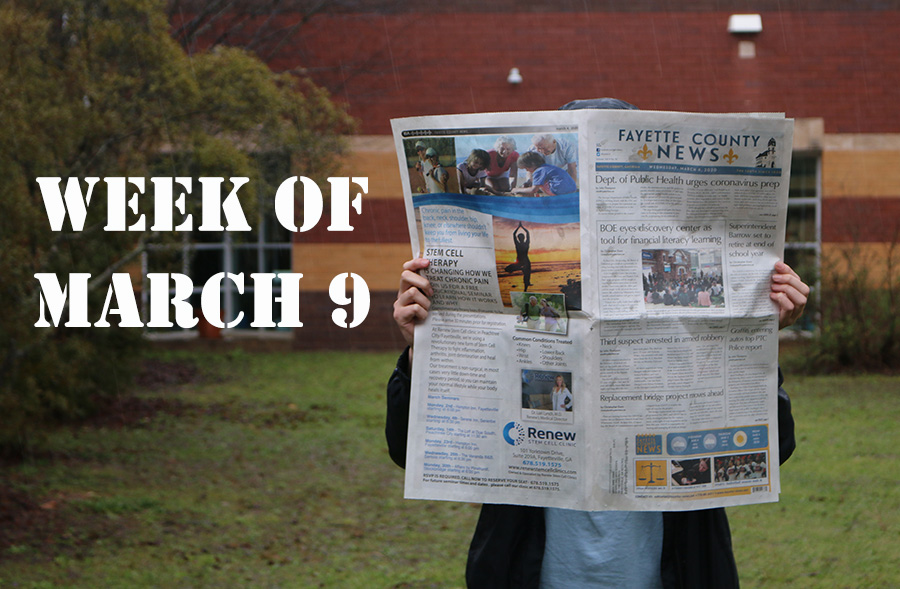 Starr’s Mill High School has been taken over by the coronavirus just like the rest of the United States. Throughout the halls, rumors and speculations of the effects of the coronavirus on the school spiral. Teachers and administrators have sat through countless meetings to address the problem and to figure out how to go about preventing the virus. On Friday, all students were given the day off while teachers learned how to operate online classes. With a pandemic, a representative in self-quarantine, and the first Georgian life lost from the coronavirus, The Prowler has the stories.

President Trump’s new chief of staff, Representative Mark Meadows, is in self-quarantine after coming in contact with a person who later tested positive from coronavirus. Meadows received testing for the virus and results came back negative, but he remains isolated for a 14-day period under doctor’s precautions.

Last month, Meadows attended the Conservative Political Action Conference in Maryland. Shortly after the convention the American Conservative Union confirmed that an attendee from CPAC tested positive for COVID-19 at a New Jersey hospital.

Several other government officials who attended the conference, Rep. Paul, Doug Collins, Paul Gosar and Sen. Ted Cruz, also announced that they would self-quarantine. Although Trump attended he has not been tested nor received any symptoms.

Recently former Democratic candidate Hillary Clinton released a statement against current nominee Bernie Sanders saying Bernie wouldn’t be ¨our strongest nominee against Donald Trump.” According to close associates of the Clintons, she has been wary of Sanders since the beginning.

When talking to Zakaria, Clinton said that he has basically built the same kind of collision that she had. She has been very critical of him throughout his entire career and is now voicing her concerns. She has also said that she hopes that if he doesn’t get the nomination that he and his supporters vote for Biden.

Clinton does think that he is on track to do what she did and “put together a collision of voters who are energized.” She had hoped they would unify, and help each other in the race. like she did when she ran against Obama.

At approximately 3 p.m. EDT, NBC News released to the public that the World Health Organization had classified COVID-19 as a pandemic. By the standards of the WHO, this means that the coronavirus has reached all corners of the world with no cure in sight.

With the United States already having over 1,000 confirmed cases of the disease after only testing approximately 8,500 specimens, the numbers of those diagnosed with the coronavirus is expected to drastically increase when more testing is put into effect. However, because the process of identifying the virus is so complex, taking multiple specimens for each case, it is unclear how many people have actually been tested.

Unfortunately, there have reportedly been 196 COVID-19 related deaths in Italy on Mach 10 alone. What is currently unknown is how the virus will affect the newly exposed United States of America.

The coronavirus has officially taken a life in Georgia. The 67-year old man was hospitalized at WellStar Kennestone on March 7. He was said to have previous underlying health conditions.

Governor Brian Kemp has urged Georgians to stay calm in this pandemic and to help others. Kemp stated in his official statement that he believes that the people at WellStar Kennestone did everything they could to save him.

In Georgia, there have been a total of 31 cases of COVID-19. The United States has surpassed 1,000 cases, with 36 ending in death.

According to the Board of Education at 11:30 a.m., Fayette County schools will be closed through March 20. The system will decide further plans for the week of March 23 by 12 p.m. on March 19.

The Board’s intention is to notify families weekly about school operations to avoid confusion. During the closure, students will receive emails from teachers about virtual learning. Digital resources are encouraged to keep students on track.

Closing schools was simply a precautionary choice. The Board believes that schools are a safe environment, but they will take extra steps to provide the healthiest learning space for the educational community. Keeping staff and students healthy is their top priority, so monitoring the COVID-19 pandemic is necessary.