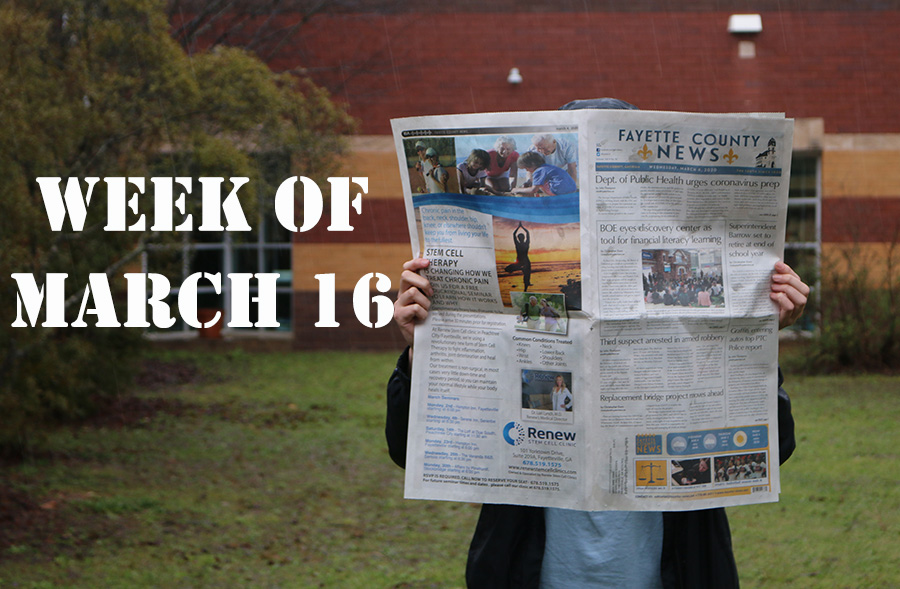 While the COVID-19 pandemic takes the world by storm, Starr’s Mill students continue to pursue their education, virtually! Teachers and students have participated in online video chats to stay up to date with material in order to complete the course on time. When not participating in online learning, students can be found all around the Peachtree City area going outside on walks, bike rides, and runs in order to escape their homes for short amounts of time. With county offices closed, a murder charge, and bats, The Prowler has the stories.

On March 16, the Fayette County Commission voted unanimously to close all government offices open to the public until March 27 due to COVID-19 scares. The closure of government offices will also result in the cancellation of the next week’s commission meeting.

At the meeting, Tax Commissioner Kristie King announced that half of her staff is released to practice social distancing while the office will remain open to take care of important business matters that can continue. King also noted that she would personally be present to monitor the doors leading into the office.

Chairman Randy Ognio and the fellow commissioners made the decision cautiously and agreed that this was the best decision in response to COVID-19. Although offices will still be filled with staff, the county advises that contact only be limited to phone calls, email, and other online communication.

California Republican Duncan Hunter has been sentenced to 11 months in prison after pleading guilty to stealing money from his campaign to use for personal endeavors. He stole more than $250,000 from the campaign. Hunter had resigned from congress back in January.

The stolen funds were used to pay for his daughter’s birthday party, his wife’s vacation, and weekend shopping trips with his mistress. Hunter and his wife tried to hide the crime by writing off their personal spendings as contributions to the Wounded Warrior Project. Both of them pleaded guilty in a single count and separate plea agreements.

Hunter’s conviction caused the end of his family’s political dynasty. Hunter had won the seat after his father, Hunter L. Duncan, who served for 28 years. Along with 11 months in prison, he will also be sentenced to three years of supervised release.

Teenager Candace Walton, who was recently arrested in Kentucky, now awaits trial for allegedly murdering her 46-year-old mother, Tasha Vandiver, and 21-year-old brother, Gerald Walton. The two victims were found dead after their house had been set ablaze.

Walton, 16,  was pulled over by Kentucky police in her mother’s reportedly stolen car. In addition to committing grand theft auto, law enforcement also apprehended her in suspicion of the mysterious nature of her family member’s deaths.

Wednesday afternoon, a court hearing was held where Walton faced charges ranging from arson and multiple counts of theft to double homicide. However, because the hearing has been closed to the public, the progress of the case cannot be obtained.

Tulsi Gabbard announced today that she would be ending her presidential campaign. She further specified that she felt that during the coronavirus pandemic her efforts were more needed as a major in the Hawaii National Guard.

Gabbard was one of the three candidates and the only woman left in the Democratic race. Her campaign began last January when she announced that she would be running for the Democraticic party. Throughout the campaign, she struggled to have her voice heard and her campaign struggled to get off the ground.

Many Democrats had been skeptical about her running, but she continued to prove herself throughout the campaign. Gabbard has placed her support behind former vice-president Joe Biden. Gabbard said that even though she and Biden will never totally agree on some things, she believes that he is a good man who will do the right thing for the country.

Bats have been labelled as a possible source of the coronavirus, but scientists disagree. Humans may be the sole creature to blame for the transfer of the disease. Scientists are still unsure where the virus originated, and to prove the source is a difficult task.

Viruses that are similar to COVID-19 have been seen in Chinese horseshoe bats, leading to questions of how untouched bat communities could have started a pandemic. Bats are the only mammal that can fly, allowing them to harbor a large number of pathogens.

Flying also requires tremendous activity for bats, in turn making their immune system very specialized. When bats fly, their body temperature mimics a fever. So, pathogens have to evolve to withstand the peaks in body temperature. Humans use a fever to fight pathogens, but if the pathogen has been evolved to fight a rise in heat fevers will be useless.