News to go with your new normal 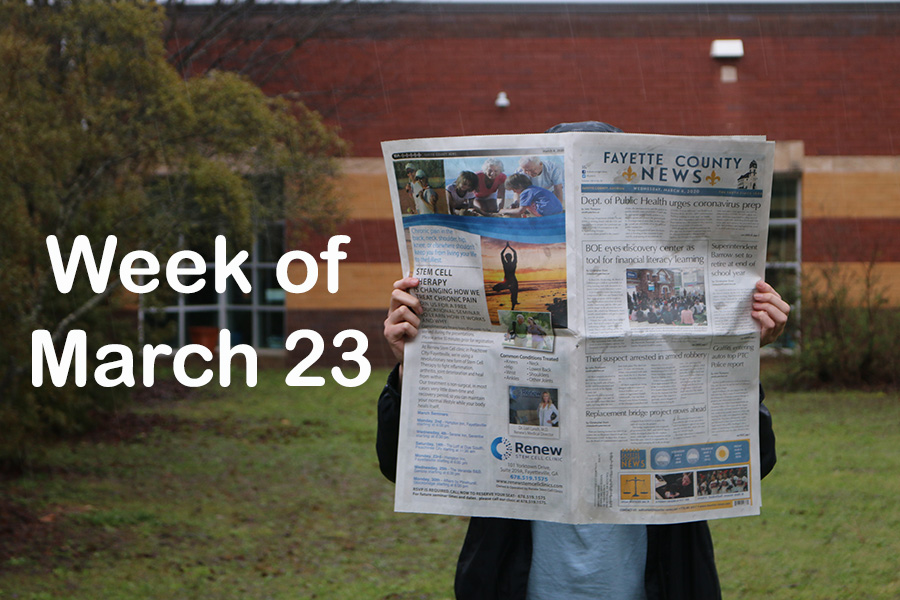 As Starr’s Mill students took on their second week of online learning, they have become more used to the process and the workload. While not working on school assignments, students have been trying out new hobbies, including various types of art and music. The end of the week was met with news that school would be virtual for the next month as well, which resulted in students and teachers alike wanting to return to school even more. With a Great American Takeout day, Olympic changes, and a child molestation charge, The Prowler has the stories.

Canada has become the first country to pull out of the Tokyo Olympics and have said that they will not send their athletes unless the Olympics are postponed for a year. The Canadian Olympic Committee stated that participating would threaten the health of its athletes and would be against the public health advice that Canada is advising citizens to follow.

Japan Prime Minister Shinzo Abe conceded hours after Canada’s statement that postponement of the Olympics would now be a possibility. New Zealand has also stated that they would boycott if the Olympics still opened as scheduled. Other countries such as Brazil, Norway, and Slovenia have urged the International Olympic Committee to consider postponement.

Japan’s Olympic minister Seiko Hashimoto announced that the torch relay would continue as planned on Thursday despite the uncertainty of the events. Organizers, however, have asked spectators to not line the route of the relay.

With the outbreak of coronavirus, many restaurants are being forced to shut down their dining areas, but on Tuesday the country tried to help these businesses by having the “Great American Take Out Day.”.

It is predicted that hundreds of thousands of people will lose their jobs because of this pandemic. Many businesses are being forced to shut down due to the lack of commerce. The point of this take out day is to safely help businesses stay open.

If the majority of families contributed to local businesses by getting take out once of buying a gift card to use after the quarantine we could help minimize the effects of COVID-19. These businesses and families need all the help they can get.

Robert Lewis Lezon, an Atlanta resident, was charged with child molestation and enticing a child for indecent purposes on March 21, 2020. He was accused of molesting a 14-year-old male from Peachtree City.

Lezon and the 14-year-old teen met on a dating app. They both mutually agreed to meet, and agreed on a location. The teen’s mom was concerned about her son’s location and called the Peachtree City Police Department to help find her son.

Lezon was charged for what happened at the location before the police even arrived. The penalty for child molestation in the U.S. could be imprisonment, fines, being registered as a sex offender, and restrictions on probation and parole.

New York City resident Rabbi Avraham Hakohen “Romi” Cohn has died from coronavirus complications at age 91. Cohn saved many families from the Holocaust and lived to tell the tale. He also led the House of Representatives in prayer in January for the 75th anniversary of the liberation of Auschwitz and International Holocaust Remembrance Day.

Rep. Max Rose, who represents Staten Island and Brooklyn, recalled Cohan’s ”life of service” to the public on Twitter. Rose drew attention to Cohn’s service to ending Nazi tyranny and the families he saved, and also led a prayer in his honor.

While many Georgia residents continue to camp out in their homes, the coronavirus’ growing presence in the Peach State lingers now more than ever. As of today, it has been confirmed that COVID-19 has infected more than 2,000 Georgia residents with the death toll on the rise.

More than doubling since Monday, confirmed cases of the virus have reached two-thirds of Georgia’s counties. Currently, 64 residents have been killed by COVID-19, with eight deaths last night awaiting confirmation.

Because of how quick the virus has spread in Georgia, the state is now ranked 10th for having the most cases in the United States. To slow down the spread of COVID-19, it is important for those feeling ill to call their doctors’ office or urgent care in advance rather than showing up unannounced.