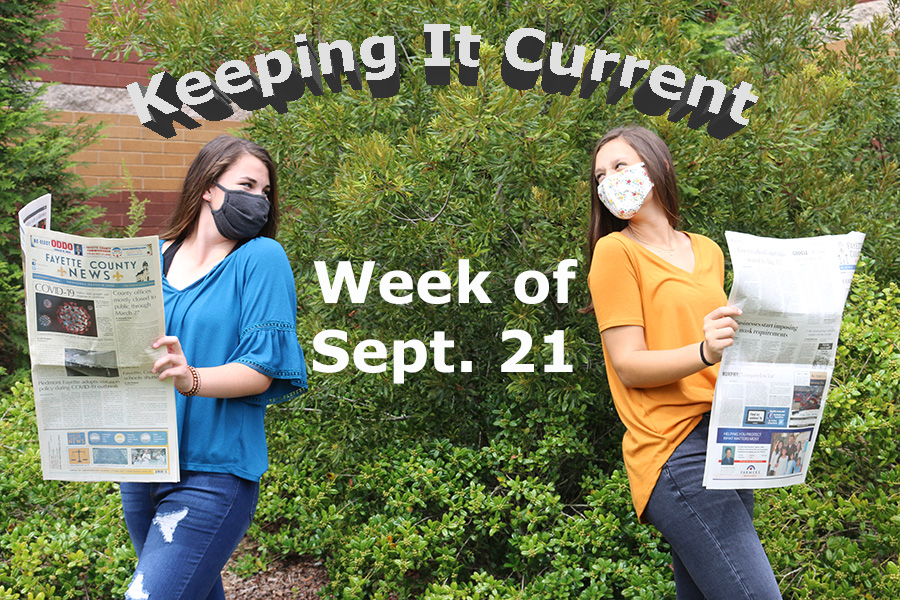 After the downpours and storms of Hurricane Sally, Panthers finally get some sun this week. Just like the sun returning, so do KICs. For this week’s forecast of news, we have a UGA fraternity getting canceled, a tropical storm, protests, graduations, and gold miners.

UGA fraternity suspends itself (Sept. 21)
A University of Georgia fraternity group suspended itself after racist and misogynist messages within a group chat Sunday night.The fraternity was mocking another student who had seen them not socially distancing and wearing a mask on campus.

The messages were posted about Arianna Mbunwe, a student at UGA. She was going around the campus and community asking people to be safe since after she saw a sorority not practicing social distancing and not wearing masks. One text said, “Lord, give me the strength to not call that woman a racial slur.” Another called her a “foul mouth miserable creature.”

UGA’s interfraternity posted a statement on their Twitter Sunday night stating that they were aware of the “racist, sexist and otherwise discriminatory comments” made on the Lambda Chi Alpha group chat. The chapter suspended itself indefinitely and council officials say that the individuals who participated will be held accountable for participating.

The tropical storm named “Beta” has affected over 11 million people. Beta moved in from the Gulf of Mexico, and released heavy pockets of downpour. The tropical storm has moved slow, but the excessive rain is leading to flash floods in many states.

In Jamaica Beach, Texas, the water level was so high that it rose over docks and flooded buildings. The storm is expected to speed up and leave Texas by Wednesday night. Beta is expected to pass through Louisiana and Mississippi on Thursday and Friday

Coastal flooding has been a concern among many. Grand Isle and other surrounding communities are actively involved in flood fights. Across Texas, just over 11,000 people are still sheltering from Beta. Texas is watching closely and will deploy flood-fighting assets as often as needed.

On the night of March 13, 2020, Breonna Taylor was shot while she was sleeping in her bed. The former officers responsible for her death were there to arrest her ex-boyfriend, who was allegedly running a drug trafficking syndicate. The former officers claim that they announced their presence and knocked on the door before entering Ms. Taylor’s home, but this claim was denied by several neighbors who did not hear it.

The verdict of the case against the officers in the case was announced in Louisville, Kentucky, resulting in one of the three former police officers involved in her death charged with “wanton endangerment.” The former officer was charged with this due to the gunshots possibly endangering the neighbors of Breonna Taylor. The results of this case led to many protests because the two other former officers who killed Ms. Taylor were not charged with anything.

The Louisville Metro Police Department had anticipated protesting, so an order to shutdown the federal courthouse downtown was signed by a local judge. Along with this, several storefronts boarded up their windows to prevent any damage. The protests eventually led to riots, causing two officers to be shot.

On Dec. 18, Fayette County is going to hold graduation ceremonies for members of the class of 2020 who missed out on an actual ceremony in May.

Not a lot of information is out yet but the high schools will get to it soon. Commencement ceremonies will be held at 6 p.m. in every high school stadium, or if there is bad weather, Dec. 19 at 2 p.m. There was also a previous idea to make graduation plans in August but that was canceled due to the virus.

Fayette County states they are “looking forward to honoring [graduates] with a meaningful celebration to commemorate their great accomplishment.” More details will be released as the target graduation date approaches.

A mastodon is a prehistoric ancestor of the elephants we know today, and one’s fossils have been discovered in a Colombian gold mine. Workers were mining near a town named Quinchia, located in the Risaralda province, when they realized they had stumbled upon a trove of ancient artifacts.

Risaralda has not had a discovery of this variety before. The massive bones have attracted attention to the area. The mastodon remains were studied by anthropologists and extracted from the cave. In addition to the many excavated bones, there was also a still-intact tusk measuring 3.5 feet long. The creature that left these remains was a megafauna, an animal in the mastodon family that went extinct somewhere between 2 million and 10,000 years ago.

Because these animals traveled in herds, it’s likely that more discoveries of this kind will be made in the area.