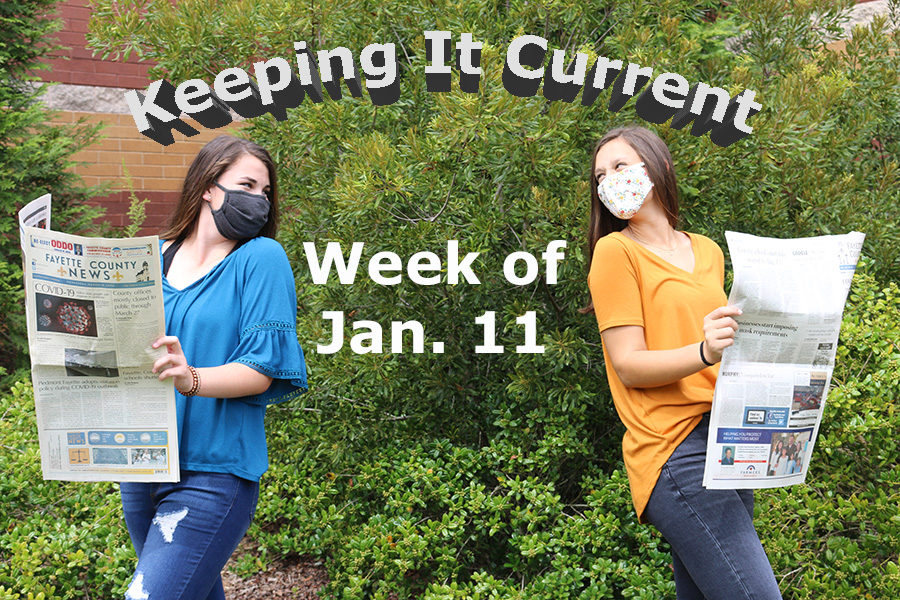 After an (almost) peaceful holiday break, Panthers are ready to get back into the swing of things with the first full week of “neon yellow” school for 2021. But just as students are back to school, our news writers are back to work with a new week of KICs. We have Georgia men facing charges for involvement in Capitol Riot, National Guard troops deployed in the Capitol, a Coweta County school board member attending Trump rallies, Trump holding a new impeachment record, and Indonesian disasters.

Eric Gavelek Munchel, known on social media as “The Zip Tie Guy,” was arrested and charged with one count of knowingly entering or remaining in any restricted building or grounds without lawful authority and one count of violent entry and disorderly conduct on Capitol grounds. Cleveland Grover Meredith was also arrested for threatening Speaker of the House Nancy Pelosi, saying he wanted to “put a bullet through her head on live television.”

Munchel has previously lived in Fulton and Dekalb counties and has previously been arrested for possession of marijuana and speeding. Meredith, who is from Hiawassee, was found in his Washington D.C. hotel room. He confessed to having two unlicensed firearms in his vehicle and participating in protests outside of Gov. Brian Kemp’s home.

The FBI is still looking for others who participated in the riots and urge anyone with information to contact them at 1-800-CALL-FBI.

15,000 National Guard troops authorized to be deployed in the Capitol (Jan. 12)

National Guard Bureau chief and Army General Daniel Hokanson confirmed that 10,000 National Guard troops have been authorized to be deployed to Washington, D.C. to assist the capitol with possible riots and protests.

After last week’s attack on the Capitol, questions were raised about why troops weren’t sent in sooner during the riot. In preparation to help protect D.C. as the inauguration of President-elect Joe Biden draws near, officials have requested the National Guard to deploy additional troops. 6,200 National Guard members are currently in D.C. and surrounding states.

In addition to the 10,000 headed for D.C. by Saturday, 5,000 troops have been authorized to be sent to either the Capitol or other states.

Coweta School Member Linda Menk attended the pro-Trump rally before rioters stormed into the Capitol building. Parents are upset with Menk for participating in a rally that led to a riot in Washington D.C. last week and are requesting for her to be removed immediately from the school board.

Trump holds the record for most impeachments in American history (Jan. 14)

Donald Trump is now the first U.S. president to be impeached twice. He was impeached after he was charged with “incitement of incerrection” after the events that happened in Washington D.C. last week.

He described how he told his followers to share their opinions “peacefully and patriotically” but also told them to “fight like hell,” which is what people believe started the Capitol raid. “Violence and vandalism have no place in our country… No true supporter of mine would ever endorse political violence,” Trump stated. However, the FBI has warned citizens, saying there might be armed protests in Washington D.C. and The Capitol cities of all 50 states the day of Joe Biden’s inauguration.

Trump is now facing a trial in the upper chamber, but it will be held after he leaves office next Wednesday.

A week of disasters in Indonesia topped off by a devastating earthquake (Jan. 15)

Disaster officials are cleaning up rubble and rescuing lives after this morning’s 6.2 magnitude earthquake in the northwestern parts of Sulawesi island, Indonesia. The disaster struck at 2:28 a.m. local time, with over 600 injured and at least 35 fatalities.

The unfortunate events of this week that preceded this tragedy include a jet crashing into the Java Sea with 62 passengers, and landslides killing at least 24 on Java island. This earthquake being the most detrimental event for the week has some survivors clinging to life, such as one girl said to be trapped under rubble and unable to move but is struggling to breathe. Another girl, by the name of Angel, is trapped with three others under the remains of her home. Until safety can be more reassured, everyone who is able has been cautioned to stay away from other tall buildings, which has sent thousands into shelter.

Disaster officials are still in the midst of cleaning and rescuing after this earthquake and its nine aftershocks.