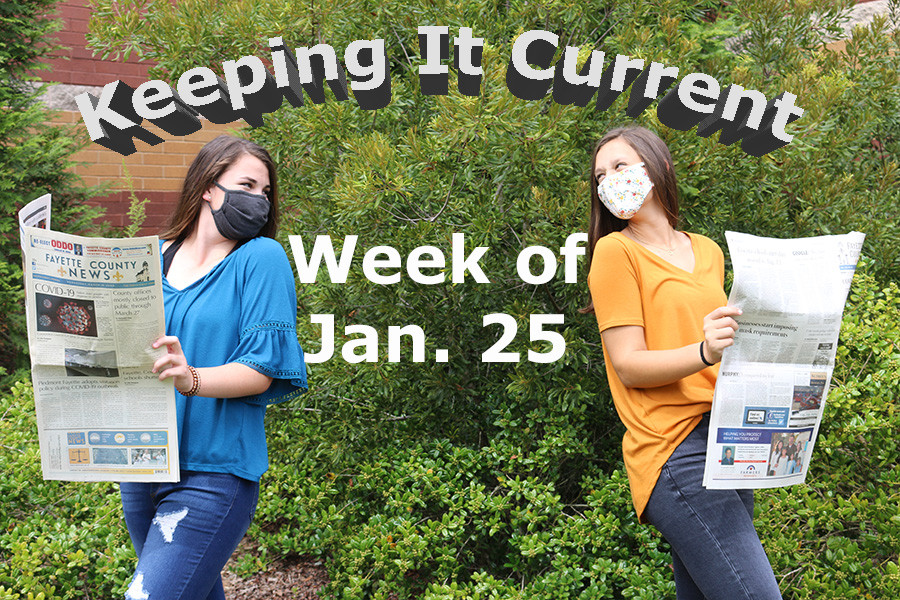 With the stress of the PSAT on Tuesday, students are glad the weekend is finally upon us, but with the end of another week comes another set of KICs. This week, we have a pharmaceutical company failing to deliver vaccines, a mother writing letters to her dying son, a Newnan resident in a hit-and-run, Nancy Pelosi requesting more money, and investigations into a chemical leak.

The EU made advance purchase deals with the company, buying 300 million COVID-19 vaccines, so the down payments could go toward expanding production of the vaccine. AstraZeneca claims that due to problems with one of their plants, the first batch of vaccine supplies will be cut by 60%. Other countries, including Australia and Thailand, will also be receiving fewer vaccines than initially agreed upon because of the supply shock.

The EU is cracking down on AstraZeneca, demanding their pre-financed vaccines be delivered. The vaccine is expected to be EU-approved by Jan. 29 and start being delivered on Feb. 15.

Val Laidlaw is the mother of Kyle Roos who passed away from COVID just hours before Christmas. Laidlaw is sharing their story hoping to inspire others who have family members fighting COVID.

Laidlaw said her son had asthma and was always very careful during the COVID pandemic. Roos tested positive for the airborne sickness and then was immediately hospitalized. When Laidlaw heard about her son she immediately started writing him letters, never missing a day. Laidlaw wrote the last letter to her son, and it was a letter no mother could imagine writing.

Laidlaw was hoping her son would be able to go home and share the letters he received with his daughters. Hours before Christmas friends and family said their goodbyes to him over Zoom. Laidlaw released the letters to the public hoping to inspire others.

Saturday afternoon, Newnan resident Stephen LaMontagne Sr. was hit by an unidentified vehicle at the edge of his driveway on Bexton Road. LaMontagne was hospitalized until Tuesday, and an investigation is underway to determine the driver of the vehicle.

LaMontagne was hit while he was working on repairing his driveway over the weekend. His son said that LaMontagne’s leg was seriously injured and he will be recovering for some time. The only information pointing toward the driver was video footage of two vehicles from a neighbor’s doorbell camera and the direction in which the vehicle was traveling.

Both vehicles identified from the video evidence showed no signs of damage where one may have struck LaMontagne. The investigation continues under the jurisdiction of the Georgia State Patrol, with assistance from the Coweta County Sheriff’s Office.

Nancy Pelosi said Thursday that extra funds are necessary to increase security at the United States Capitol. Due to the attacks on Jan. 6, tensions between members of the House and Senate have increased.

Pelosi says that there are members of Congress who would like to bring their guns to the floor, and a few have reported receiving threats of violence. Some think these issues are partisan, as many Republicans have objected to new metal detectors but want to carry concealed weapons.

Pelosi is meeting with retired Lt. Gen. Russel Honoré, who will lead a security review of the Capitol. In addition to the new metal detectors and barrier fences, she hopes to discuss other safety measures and funding.

Officials at Hall County have identified six workers who had died from Thursday’s chemical leak. Investigators said that five of the victims died in the plant, and the sixth died after being treated in the hospital.

A spokesperson for the health department reported that all of the injuries were respiratory. Three of the victims remain in critical condition, while several others, including first responders, have been treated and released after breathing in chemical fumes.

Occupational Safety and Health Administration, the State’s Fire Marshal’s office, and crime scene investigators are still trying to pinpoint the cause of the incident. Friday morning the U.S. Chemical Safety and Hazard Investigation Board sent investigators to investigate the chemical leak. They are expecting to arrive late Friday evening to begin their work.