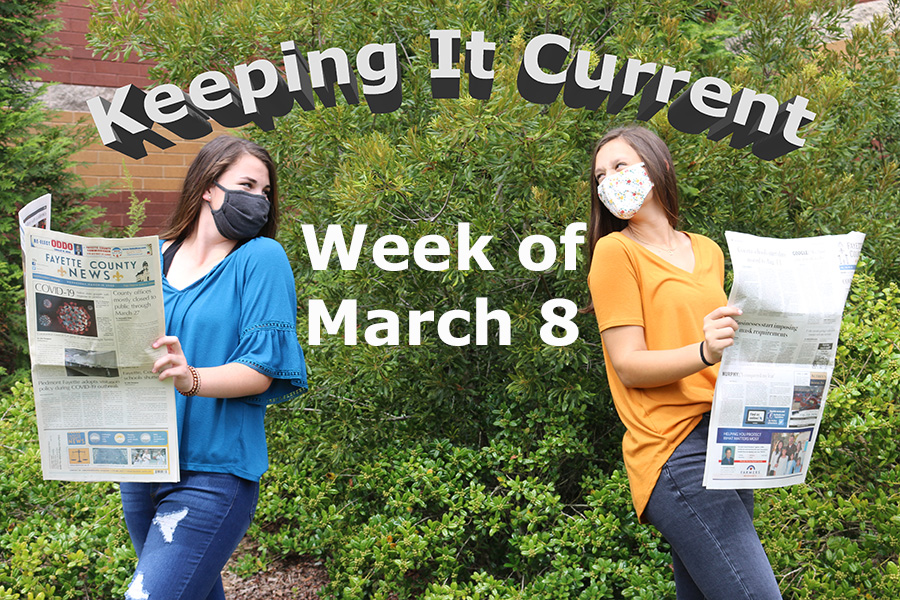 Due to teachers getting the COVID-19 vaccine, students participated in virtual learning days Thursday and Friday. But just because the week was cut short does not mean that KICs have to be. This week we have a Mexico women’s memorial, two giraffes dead in a fire, FCBOE’s plan for elementary schools virtual learning for the 2021-2022 school year, the expansion of Georgia’s vaccine eligibility, and New York’s governor being asked to resign.

A fence was constructed to protect Mexico’s National Palace against a planned march for International Women’s Day, but the fence is now covered with names of femicide victims. Gender-based crimes have reached a high, but according to the public, the government does nothing to combat the issue.

Citizens questioned the reasoning for the large fencing, asking what their leader, President Andrés Manuel López Obrador, was afraid of. He responded by saying that the barriers were “not out of fear, but to prevent provocations and to protect historic buildings.”

Despite his concern, women’s rights activists are still not satisfied with the growing number of women killed in Mexico each year. Government figures suggest that at least 939 women were killed in 2020, and the public feels like there’s nothing changing. Hoping for justice, women in Mexico honor the victims and plan to do more to avenge them.

Two giraffes died at Roer’s Zoofari in Vienna, Virginia, after their barn at the zoo caught on fire. The Fairfax County Fire and Rescue Department was alerted about the barn fire late Monday afternoon.

The authorities immediately reported fire from a roof at Roer’s Zoofari to the owner to inform her about the accident. Zoofari owner Vanessa Roer received the call about the incident at 5:30 p.m., and claims staff and the zoo’s veterinarian arrived within minutes to rescue and care for 20 other animals involved in the accident. The Fairfax County Fire and Rescue Department confirmed the death of the two giraffes after they were able to get the fire under control.

The incident is still under review as staff at Roer’s Zoofari mourn the loss of Waffle and his companion giraffe.

March 10 – Virtual classes to be limited next school year

On Monday, officials told the Fayette County Board of Education that elementary schools will only have brick-and-mortar classrooms in the 2021-2022 school year.

Young kids are not the only ones being restricted from virtual learning. Middle and high school students who opt for virtual learning will only have access to core classes. Advanced Placement and electives will not be available virtually.

These changes are taking us one step closer to the normalcy that occurred before COVID-19 hit.

Less than twenty percent of the Georgia population has been vaccinated at least once. Georgia currently ranks last in the U.S. for vaccinations administered. Gov. Brian Kemp intends to distribute vaccines at a higher rate with the new eligibility status in order to meet the high demand. An estimated 3.3 million people will soon meet the criteria for vaccinations on March 15.

If vaccine supplies increase, Kemp has stated that he intends to go forward with eligibility for all Georgia residents 16 and older next month.

Multiple members of New York’s congressional delegation called on Gov. Cuomo to resign due to the growing numbers of sexual harassment and alleged groping allegations against him.

The Democratic governor has denied all of the allegations against him and has apologized for making anyone feel uncomfortable. A majority of lawmakers are also calling on him to resign, Democrats included. Lawmakers also criticized Gov. Cuomo for keeping the deaths of nursing home residents from COVID-19 a secret for months.

The state assembly has allowed an impeachment investigation to begin.