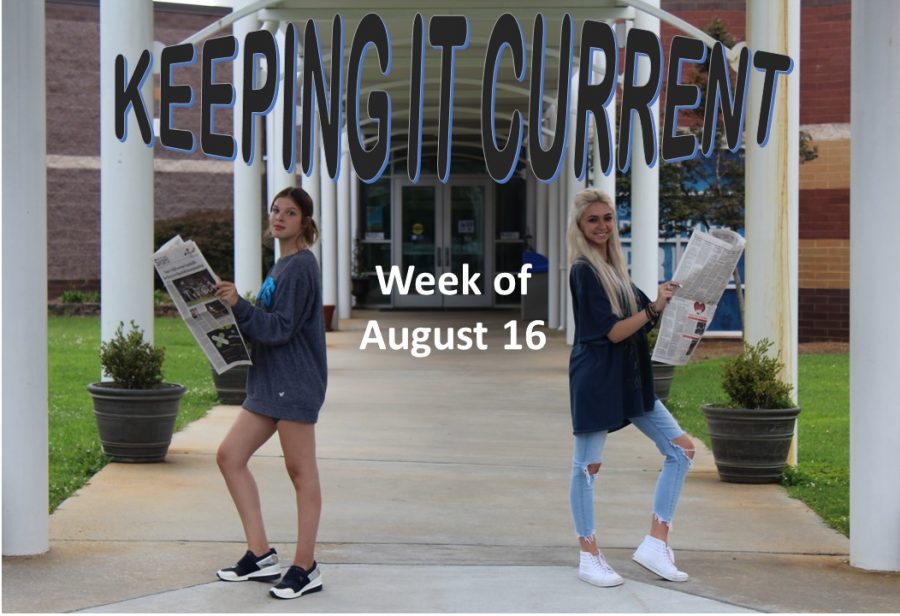 Panthers, we have almost been in school for a month and masks have already been mandated. But don’t let masks ruin all your fun. Come support your Panthers in the inaugural Coweta-Fayette Kick-Off Classic this Saturday at 8 p.m. While you are waiting for the game, catch up on some current events with this week’s KICs. This week we have trouble in Afghanistan, Hurricane Fred causing power outages, Fayette County schools mandating masks, a man claiming a bomb in the U.S. Capitol, and the government cutting unemployment checks.

In wake of the Taliban regaining control over Afghanistan, many Afghans have attempted to cling to planes as they take off from Kabul. Footage of the chaos shows Afghan citizens standing on top of planes crowding the runways. All military and civilian flights coming in and out of Hamid Karzai International Airport have been suspended due to these events..

At least five people are reported killed at Kabul Airport as Afghans try to escape the country. Two Czech aircraft were sent to help evacuate nationals but were redirected to Baku, Azerbaijan, while a German was diverted to an airport in Uzbekistan. The aviation authority stated that the country’s airspace has been released to the military, while recommending all commercial airlines to avoid the airspace.

Fred continued to cause flooding in Georgia and North Carolina. Transylvania County in North Carolina suffered 10 inches of flooding and issued a state of emergency. Several Georgia counties have been negatively affected by Fred. There have also been reports of a different tornado in Jeffersonville and Macon, Georgia.

The worst of  Tropical Storm Fred has passed, but more impacts are predicted as the storm heads toward the northeast.

The mandate extends for a period of ten days and was enacted due to the rising number of cases and quarantines in Fayette County schools. In the August 13 report, 173 positive cases and 703 quarantine cases were noted. Also, school staff is required to wear masks all the way through September 17.

Spokesperson Melinda Berry-Dreisbach said that mask policies are being set on a school-by-school basis. The number of cases at each school are being monitored and the mask mandate may continue if needed.

August 19 – Man claiming he hid a bomb in the U.S. Capitol surrenders

A man who claimed to have a bomb by a pickup truck near the U.S. Capitol surrendered to law enforcement after a standoff between the two that lasted for about five hours.

Law enforcement officials identified the man to be Floyd Ray Roseberry, 49 years old, from North Carolina. He went to the library earlier today with a bomb in his truck. He made sure to tell police he had a bomb and negotiated with them for hours until he surrendered and was taken into custody around 2:30 p.m.

A lot of details are still hazy since this is so recent, but the majority of their conversation was about Roseberry wanting to speak with President Biden.

August 20 – Government cut off the benefits to the jobless

The government decided to cut off the benefits to people who are unemployed in hopes for them to be pushed to get jobs. Though many were able to get jobs the economic status can still be affected.

The cuts resulted in about a 26 percent employment increase at the start of August. This left people worse off and having to cut their spending funds by 20 percent just to get by due to losing on average $287 a week.

Even though some people found jobs, it is going to take them a long time to get their earnings back.