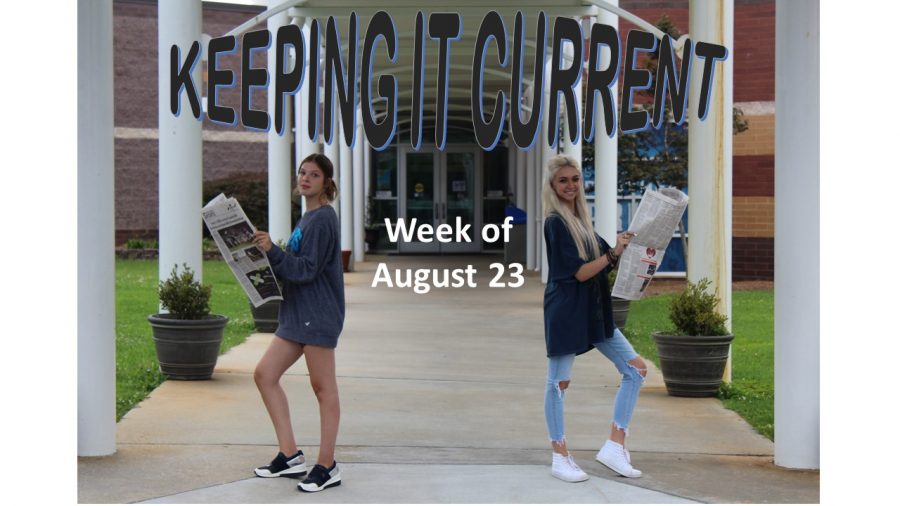 Panthers, FCBOE has decided to go back to the basics this week, with a full mask mandate until September 17. But don’t worry, you don’t need your mouth or nose to read these amazing KICs. We have vaccination rates increasing, a former UGA football player running for Senate, Chick-fil-A employees fighting over a man, wildfires in the west, and a new voting bill passed in Texas.

Dr. Janet Woodcock and Dr. Peter Marks from the FDA are trying to get as many people as possible fully vaccinated. This move comes after the FDA approved the Pfizer and BioNTech vaccines.

Major companies in the world have said to their employees they should be getting fully vaccinated no later than this fall. There are some businesses whose workers are not vaccinated yet, because they are private businesses where only the workers enter the building and do everything online.

Authorities expect an increase in vaccination rates now that two vaccines have FDA approval. During the briefing, officials stated that the approval should help convince many private companies that the vaccines are safe and effective.

Former UGA football star Herschel Walker announced his plans to run for the Senate. Walker has residency in Texas and Georgia, but recently filed for registration to vote in Georgia. He also filed his Federal Election Commission on Tuesday.

Walker’s run is controversial among Republicans. His success will be decided on a few key elements. Walker has always been vocal about his support of former President Donald Trump, and that support has been returned. Trump supports Walker fully in his run for Senate, saying that he is “unstoppable.” Other Republicans are wary of the new candidate. Walker would be running against Raphael Warnock, Georgia’s first black senator. Some believe he would not be able to win against Warnock due to Warnock’s defeat of Kelly Loeffler.

Walker’s past has come into the light as he announces his run. His ex-wife claimed she could see “something evil” in Walker in regards to his dissociative identity disorder and violent tendencies. Walker will face many challenges as he runs such as high-profile Republicans who oppose him, Senate Democrats, and the three other candidates running.

Two female employees, Lanyia Chadersia Bentley and an unidentified minor, got into a fight over a male coworker at the Chick-fil-A Dwarf House in Fayetteville, Georgia. Police arrived at the scene with one of the females sitting on the floor of the dining area.

The females were interviewed separately from each other. One resisted and made defying comments toward police officers. Witnesses at the scene said the altercation was over another employee.

The minor involved declined to be seen by medics. Bentley was released with a citation for disorderly conduct. The underaged female was released to her parents with a juvenile complaint.

North California underwent numerous wildfires throughout the summer, and fire officials are predicting the same conditions are headed south. In San Bernardino, a county outside of Los Angeles, multiple houses and acres have been destroyed, but precautions were taken to prevent the spread to smaller communities to the south.

After a few cooler days the increased risk of wildfires rises along with the temperatures. Lyn Sieliet, spokeswoman for the San Bernardino National Forest, told Voa News there’s a scarcity to fill firefighting schedules. Thirteen different states have battled a combined 92 fires scattered throughout the west.

Air quality advisories have been issued throughout several counties in California. The past 30 years the west has had increasing temperatures and drier conditions making wildfires even more dangerous.

A new voting bill passed in Texas that bans voting places such as 24-hour voting and drive-through polling places. This ban would hopefully limit voting fraud. Texas Republicans have been rooting for this bill to pass after the unexpected results of the 2020 Presidential election.

The bill, according to Democrats, will harm voting from the Hispanic and Black communities, but the argument from the Republicans is that it is their concern if people vote or not. One part of the bill requires video recordings of the ballot counting areas to prevent voting fraud.

The bill caused disruption between the two parties after a 38-day walkout by a group of Democrats. The bill still needs to be approved by the Senate before it can be sent to Governor Greg Abbot.