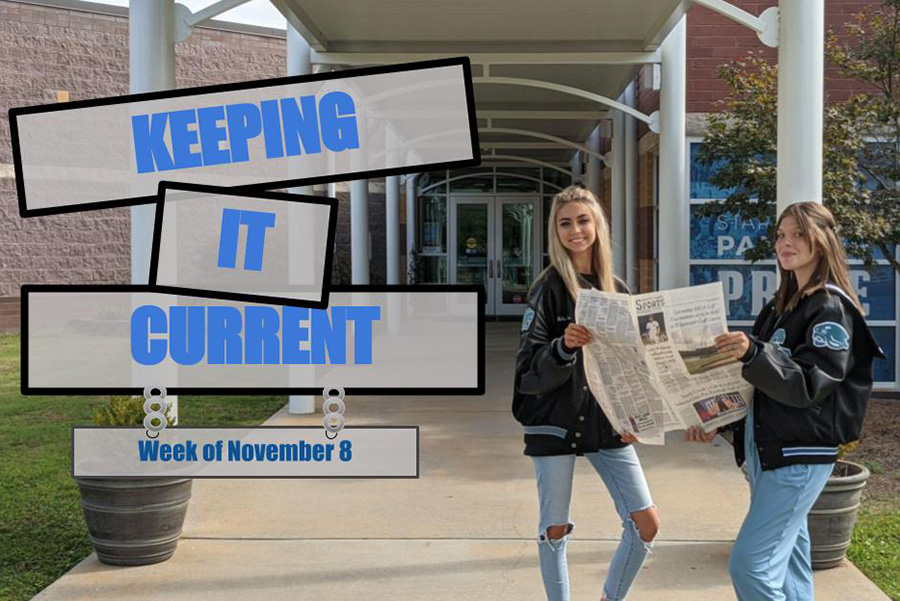 With dropping temperatures and the time change, fall is really starting to set in at Starr’s Mill. Around the school, teachers’ rooms and the hallway outside of the cafeteria celebrated Veterans Day. While you are out enjoying the chilly weather and drinking apple cider, take a minute to read these KICs. This week we have Japan loosening COVID-19 restrictions, a continued search for a killer, Fayette County hosting an art auction, the continued success of SpaceX, and Mark Meadows failing to show up for his deposition related to the January 6 riots.

Japan has started to ease its rules considering the Coronavirus. They have started to accept new entry applications from companies and cut the quarantine period from 10 days to three days for those who have been fully vaccinated.

Although Japan is still not allowing the entry of tourists, the country is still going to accept tourist groups. The government is working to monitor and control the actions of these groups to keep a lid on COVID-19. Japan is also allowing students and interns from overseas, but they must be tested for COVID-19 multiple times before stepping foot in the country. For these cases, the students or interns must be quarantined for 14 days, but that can be shortened to 10 days if they have received one of the vaccines approved in Japan.

The Japanese government has made multiple statements saying that they wish to move forward, and are doing that by easing up on the restrictions of Coronavirus only because of the declining infections. Japanese officials believe that this step forward is the right response to strong demand by the business community.

As the search for the killer of officer Paramhans Desai continues, Henry County police have doubled the reward for the arrest and conviction of the suspect.

On November 4, 2021, Desai responded to a domestic call near Key’s Ferry Road in McDonough. The 38-year-old father of two was suspected to be shot by Jordan Jackson before he drove away in a white 2016 Honda Civic. Since the event, the Henry County police and Former NBA player Shaquille O’Neal have offered a $30,000 prize for the arrest and conviction of the suspect, which has now been raised to $60,000.

The Henry County Police Department set up a fund for donations in Desai’s honor. Ralph Easterwood Angel Wings for Warriors Benevolence Fund supports families of first responders and is accepting donations as the search continues.

This Saturday, the Fayette County Public Library is hosting an art auction from 10 a.m. to 3 p.m. There will be more than 50 different art pieces made by local artists. Every single art piece is paired with a book that describes the art and is available for purchase.

Silent auction winners will be announced at 3 p.m. Winners will have until 5 p.m. to pick up their prizes.  Art pieces will range from watercolor, acrylic, and oil to mixed media and jewelry.

All proceeds from the event will go toward the Fayette County Public Library. Purchases are tax-deductible.

Tuesday night, Elon Musk’s company SpaceX sent a rocket into space from the Kennedy Space Center in Florida. The rocket, now named The Falcon, reached orbit for around 15 minutes. The crew consisted of three men and one woman.

The Falcon is supposed to reach the International Space station within 24 hours. Astronaut Matthias Maurer became the 600th person to fly into space in the last 60 years. NASA gave him the mission number 600 to celebrate. Prior to this, the mission did get delayed due to one of the astronauts being ill.

This crew replaced the one that returned earlier this week. They will join two Americans and one Russian on the International Space Station.

Trump’s former White House Chief of Staff Mark Meadows never appeared for deposition on Friday. A House committee is seeking an investigation that may result in criminal charges against Mark Meadows after the January 6 incident at the Capitol.

Committee staffers were prepared and ready to go with the interview but left nine minutes after the deadline passed. The committee has not yet commented on if Mark Meadows was a no show. His attorney did not respond to a request for comment after the scheduled deposition.

The committee may now refer Mark Meadows to the Department of Justice for contempt of Congress. Bennie Thompson, the committee’s chairman, scheduled the deposition late Thursday night to make an effort to force Mark Meadows to show up.