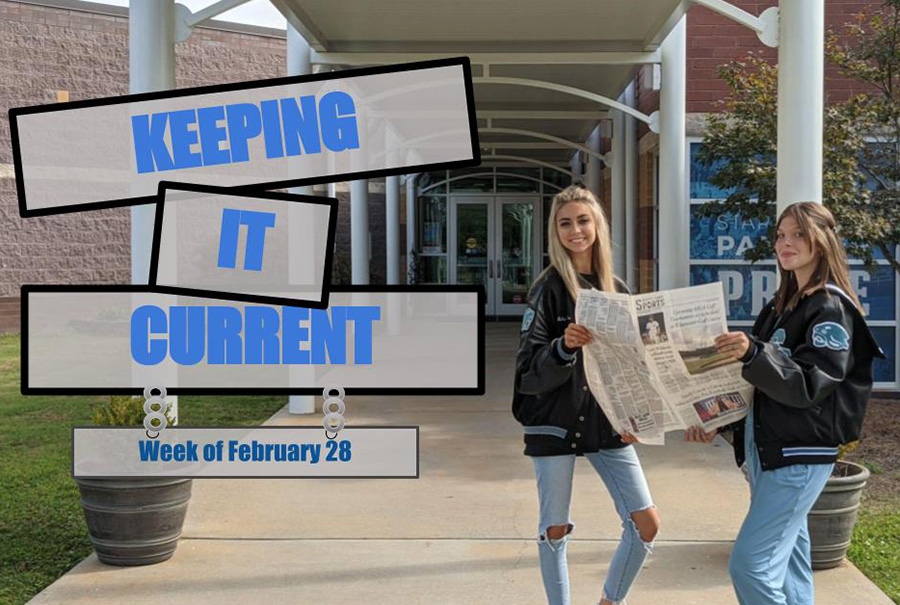 For the first time in months, we finally do not have to wear jackets outside! Since this week’s weather has been reminding the staff of spring, sit outside and catch up on some KICs. This week, Russia attacked Kharkiv, teens were linked to a series of armed carjackings, a Peachtree City power line caught on fire, the Cleveland wildfires continue to spread, and

Despite fierce resistance from both Ukrainian troops and citizens, Russia is still attacking Ukraine on several fronts. Although we’re only a few days into the fighting, a recent attack by Russian forces on the Ukrainian city of Kharkiv has left a dozen dead, and hundreds more wounded.

Russia has previously denied targeting any residential areas, but many defense analysts have described this attack as a “cluster munition strike on a dense urban area” after residents released numerous videos on social media showing rockets landing in the surrounding city.

The bulk of Russian forces held about 19 miles north in the city of Kyiv have slowed Ukrainian resistance, and air raid sirens were heard once again this morning. Since the invasions began there have been a reported 102 civilian deaths, including seven children, and hundreds more injured.

Brookhaven police have arrested five teenagers who have shot one driver in one county and carjacked another. The culprits then led police on a high-speed car chase in Brookhaven.

Three 16-year-old and two 17-year-old males have been connected to the string of incidents, which had happened early Tuesday morning. Dekalb County officers alerted other jurisdictions to be on the lookout for a 2019 blue Kia Forte. Brookhaven police spotted the vehicle, which was traveling on I-85 north and turned off on Chamblee Tucker Road.

It is still unclear on how the police stopped the vehicle, but all five teens were taken into custody. Police have identified two of the teens as Kevin Hernandez and Manuel Hernandez, but it is unclear if they are related. Identities of the other participants have not been identified since they are minors. Two weapons were recovered as well.

Peachtree City Police Department and Fire Rescue reported that the fire happened because the power line was attached to a wooden pole. It happened in the middle of Highway 54 and Highway 74. Both directions of the highways were shut down and Fayette County residents were asked to choose an alternate route.

The power outage spread throughout the area and down to the Walmart shopping center.

Firefighters are trying to control a fast-moving wildfire that broke out on Wednesday in Cleveland National Forest. The first report was around 11:20 a.m. with 10 acres caught on fire around Holy Jim Trail in Orange County. After three hours since the fire broke out a total of 400 acres have been affected.

Firefighters worked through night and day on laying down containment lines, while helicopters dropped water to help stop the growth of the fire. Wednesday evening the fire hit 500 acres, with the fire starting at the bottom of a drainage area and then climbing up along the canyon in Holy Jim Trail.

The fire did not affect any buildings on Wednesday afternoon other than some communication towers. The fire crew came across some wind making the air quality good at the moment for the South Coast.

On March 3, 2022, Florida Governor Ron DeSantis said that he would sign a new bill that would ban abortions after 15 weeks of pregnancy. The only exceptions that allow otherwise involve “serious risk” to the pregnant mother or fatal fetal abnormality. This does not include rape or incest.

This bill makes Florida the most recent Republican-led state to put into action a 15-week abortion bill this year. Senators in the legislature voted 23-15 in favor of the bill. If signed by DeSantis the changes will go into effect July 1. Republican State Senator Kelly Stargel, the bill’s main sponsor, stated that the bill has a duty to protect life and safeguard unborn babies.

This isn’t the only bill the Florida legislature has put into play that is considered controversial. The “Don’t Say Gay” bill, enacted on January 24, 2022, prohibits schools from encouraging talk of sexual orientation and gender identity in classrooms.