Excused absences should not count toward exams 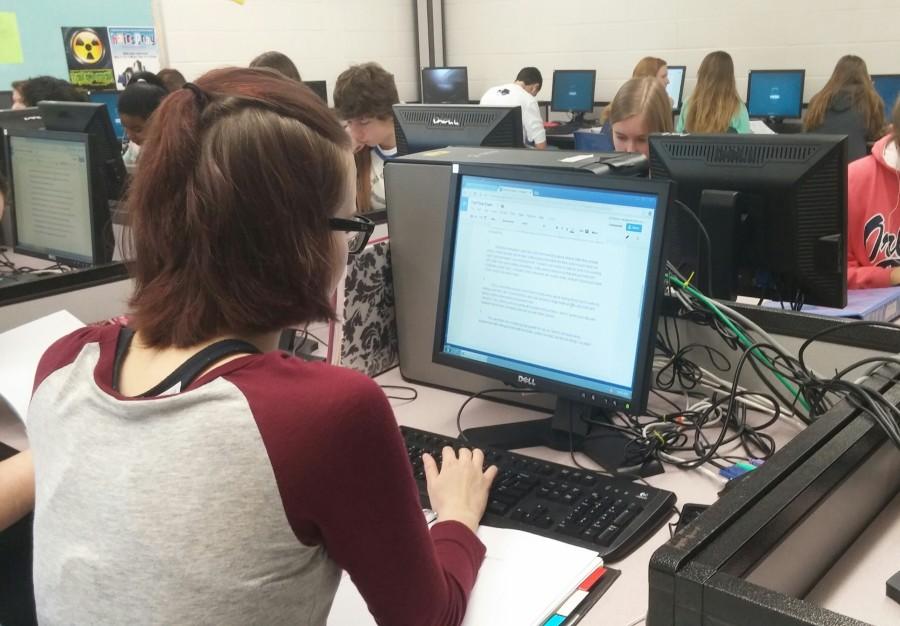 Freshman Ally Marlow sits in front of a computer screen for two hours taking her Writer's Workshop final exam. Currently, students with five or fewer occurrences, excused or unexcused, can exempt one exam on attendance if they have a 71% or higher in the class.

A few weeks ago, senior Philip Snitzer was unexpectedly faced with a dangerous bout of appendicitis which hospitalized him.  Prior to his appendectomy, he did not have any absences, excused or unexcused.

“I missed two weeks after that, which gave me nine excused absences, ruining my chances to exempt any exam based on attendance,” Snitzer said. “I can’t control when my appendix is going to swell up, so I shouldn’t be penalized for something I can’t help.”

As it is written right now, the attendance exemption requirements do not differentiate between excused and unexcused absences. Many students feel that the policy needs to change.

“It is not our fault when an emergency occurs, or we get sick for days on end or more than once,” junior Brianna Clarke said.

“Why should we be punished for something that is completely out of our control?”

The current attendance exam exemption policy states that a student with no more than five occurrences, excused and/or unexcused, is eligible to exempt one end of semester exam having kept an average of 71 percent or higher.

Principal Allen Leonard is in agreement with the current policy. “We give [students] five occurrences before [they] lose [their] attendance exemption,” Leonard said. But are five occurrences enough?

A student acquires an occurrence every time he or she is tardy to class, late to school or leaves school for any personal, non school-related reason. However, some situations in life are uncontrollable, and exam exemptions should not be revoked for students with excused absences due to such occurrences.

Car accidents, emergency medical procedures and funerals happen without warning.  “My grandpa died last year and going to his funeral costed me my sixth occurrence,” sophomore Sophie Chaisson said. “So I couldn’t exempt an exam because of missing school for a family member’s funeral.”

Some may argue that Chaisson’s example is an extenuating circumstance or rare case, but what about regular illnesses that still count as excused absences?

In one semester there are 90 school days. The policy gives students only five times in a little less than 100 days of school to schedule mandatory doctor appointments and barely leaves any room for family or personal emergencies. This does not include potential illnesses that spread like wildfire in a high school filled with hundreds of people.

School nurse Kelli Kalen experiences this dilemma first hand. Her frustration lies in the “students with parents not wanting the students to go home because they are trying to stay in school due to the attendance and not have over five occurrences,” Kalen said. “However, when they come to school under the weather they are probably contagious and what they are doing is they are giving it to other kids and it’s just spreading more and more.”

So far, during the fall semester of 2015, there have been 22 recorded cases of “communicable diseases; that is anything from pneumonia, strep throat, pink eye, flu and mono,” Kalen said.

Even Leonard agrees.  “If you are sick, stay home,” Leonard said.

If students are going to listen to their principal and stay home for excused reasons, then a change needs to be made.

To avoid punishing students for situations out of their control, the county needs to edit their attendance exam exemption policy. Absences excused with a doctor’s note or a funeral program should not have an effect on one of the few occurrences counted against a student. Changes to the current county policy will help students with special yet common circumstances use the exemptions the school offers them.