Rated: “A” for Arbitrary 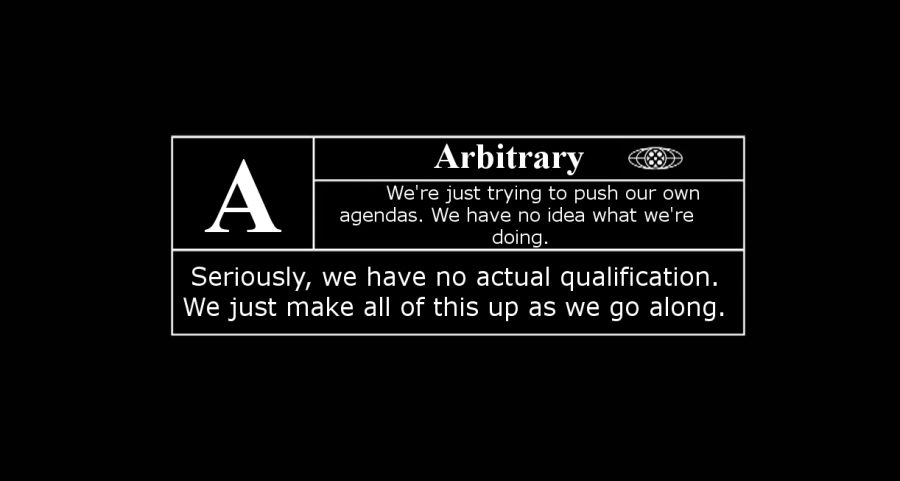 Every movie has to get a rating. Every single one. In America, the responsibility of deciding what rating a movie deserves belongs to the Classification and Rating Administration (CARA), a group of individuals headed by Joan Graves and overseen by the Motion Picture Association of America.

Movies are typically rated based on the amount of vulgarity, sex, violence, and substance. This makes sense, because you don’t want your children seeing something they aren’t ready for. That is totally understandable and acceptable.

The problem is that all of the rules are arbitrary.

There’s no rhyme or reason to how the movies are rated. Ultimately, it falls down to how the CARA board members personally feel about a movie. The CARA board is a group of anonymous individuals, supposedly with children between the ages of 5 and 17. They’re intended to represent the common American adult — loving, caring parents who want to shield their children from evil things like alcohol and reproduction.

In the 2006 documentary “This Movie is Not Yet Rated,” director Kirby Dick reveals that multiple members of the board have been serving for decades, and not because they’ve been having more children.

One can assume that the reason the board members are kept anonymous is so they can’t be bought out by movie studios to award better ratings. While potential corruption in the movie industry is another story entirely, there is one problem that this anonymity can bring. How do we know when a person leaves the board?

This anonymity allows board members to serve for decades, which is something CARA itself “tries” to enforce. No one finds out when a board member is stepping down or when a new one is hired because no one knows who they are. Ultimately, it’s a bunch of old people pushing their outdated views to try and shape a medium that’s constantly evolving.

It’s worth noting that all of these rules only apply to the American rating system. There is no international group that decides the ratings for movies. A movie that is rated R in America might be the equivalent of PG-13 in Germany. Almost every country has their own system, and no one has come together to unite them like Otto von Bismarck did the Prussian people.

In its infancy, the film industry was rampant with violence and vice. There were no regulations, so filmmakers just did what they wanted. This era is referred to as “Pre-Code Hollywood,” before the formations of groups that tried to “preserve morals.”

After several especially risqué films and very public scandals, most notably the murder of budding star Virginia Rappe by the highest paid actor at the time, Roscoe “Fatty” Arbuckle, Hollywood decided to clean up its image.

This led to Hollywood as we know it now. There’s still the risqué films and celebrity scandals, but it’s all cleverly hidden under the “R” rating — The peak of the rating system, ignoring the rare NC-17.

When it came to rate the movie, Hollywood got a little confused. It’s a fun, adventure flick that revolves around beating up some Nazis. Who doesn’t love that?

But it’s also surprisingly violent. A man gets thrown into the propellor of German plane. A Nazi spy gets his face melted off by the power of God. There’s stabbing, shooting, snake bites, and immolation. There are allusions to sex and several occurrences of drinking and smoking. After all, isn’t Indiana Jones just a more rugged James Bond?

All of this coagulated into the creation of PG-13. But do you know what else is a PG-13 movie? “Pirates of the Caribbean.” All of the “Harry Potter” movies.

Movies like “Star Trek” and “The Avengers” are also PG-13. I can list more examples, and it’ll just be clearer that PG-13 isn’t just a rating — it’s a code word for “Summer Family Blockbuster.”

There’s a reason that most movies want a PG-13. It’s really simple —  it allows a bigger audience to see the film and make as much money as possible. There’s no shame in that. Movies are super expensive and the whole idea is to make a profit. That’s basic business.

The problem exists when the want for a lighter rating is allowed to cheapen a film and undermine artistic integrity. It’s an almost eternal issue with art — the horrific fate of the “sellout” who forgoes their passion for some cold, hard cash.

Now, ideally, this would never happen. However, it does, and it’s excusable when one band does it, but where do we draw the line?

According to BoxOfficeMojo.com, 10 of the 15 highest grossing films of 2016 were rated PG-13. This includes the “big summer blockbusters” like “Ghostbuster,” “Jason Bourne,” “Suicide Squad,” “Star Trek Beyond,” “Batman v Superman: Dawn of Justice,” and “Captain America: Civil War.”

*These statistics accurate as of the date of publication.

“Ghostbusters,” the most recent remake/cash-grab du jour, practically bombed at the box office, and while you can make your own arguments about the validity of its scores, it’s a little embarrassing that the merchandise was on clearance before the film was even released.

If you’ve been following the controversy around the DC Comic’s most recent attempts to stick it to Marvel, you’ll know that director Zack Snyder’s original cut of “Batman v Superman: Dawn of Justice” was not only longer, but also rated R.

The film was re-edited for a new rating to appeal to a wider audience, and it most definitely suffered for that. DC is finally trying to set up their own cinematic universe, similar to what Marvel has been doing since the release of 2008’s “Iron Man”.

“Suicide Squad” had a similar issue.  The relationship between Harley Quinn and The Joker is based around the Joker breaking her mind and manipulating her. That’s a textbook example of an abusive relationship, but select scenes were cut from the final version of the film to make it appear less so.

Not only does this forgo the story for the sake of profit, it undermines the intentions of Harley Quinn’s creators, Bruce Timm and Paul Dini. “Suicide Squad” is arguably the best of the DC cinematic universe movies, but it could have been so much better. After all, didn’t “Deadpool” prove that a superhero movie can be rated R and do well?

Ultimately, the problem isn’t with the ratings themselves. It’s perfectly fine to have a system in place that warns parents about what their kids are seeing.

The problem lies in the guidelines for this system being both outdated and arbitrary. When movie studios shoot for a certain rating just to reach a larger audience, they betray artistic integrity in favor of greed.

If studios aren’t going to put out art because they care about it, why put it out at all?