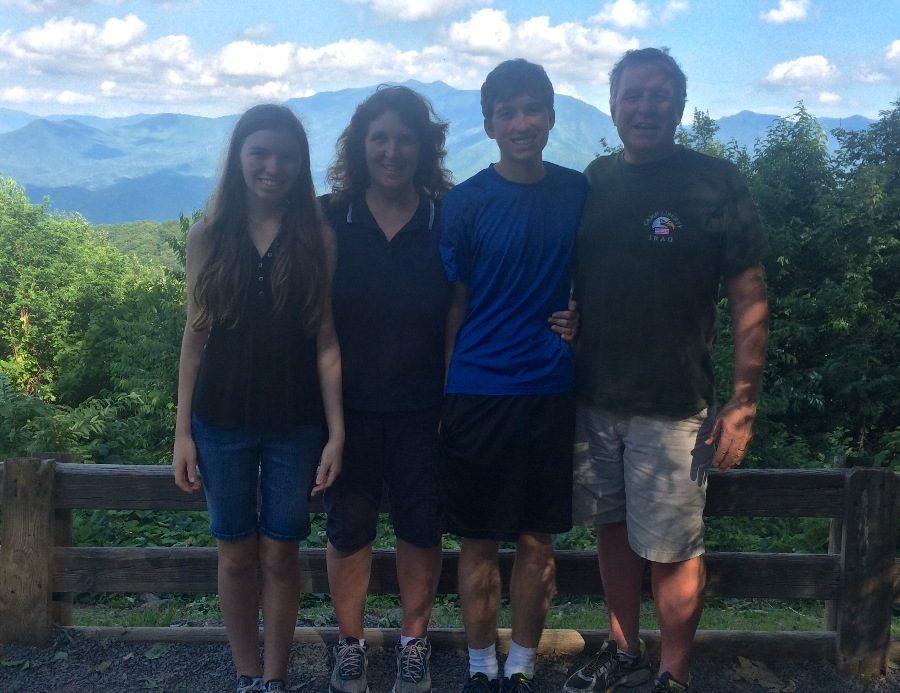 The Kelly family pose for a family photo while visiting Gatlinburg, Tennessee, for the first time. The parents do their best to share the housework equally and support gender equality in the household.

“The idea that women are supposed to be the only ones taking care of the housework and kids is a historic idea,” sophomore Sarah Kelly said.

Nowadays, it is much more common for women to be employed in the workforce and balance the tasks of taking care of the house and raising children. “Men should be held just as responsible for childcare and housework as women because, believe it or not, it takes a woman and a man to have a child, so why don’t both contribute to raising the child?” sophomore Ally Marshal said. Women doing all the work in the household is not efficient or helpful to the family dynamic.

The unfair gender roles seem to pile constant work on the woman, while men only have to do about 8 hours of work. To battle this unfair system, the concept of dual parenting emerged, becoming more and more popular over time. Dual-parenting has been very successful with dividing work evenly between the two parents. Instead of having the mother doing all the work, the family becomes well-rounded and children get to learn how to do household chores.

The concept of gender roles have been around for a long time. According to “Patriarchy, Civilization, And The Origins Of Gender” by John Zerzan, modern day sexism was born in the ancient society where the men were more physically able, so they went out and hunted for the food while women took care of gathering plants and fruits and taking care of the children. This theme of the men doing the heavy lifting has continued through the centuries and has been most prominent in wars.

During World War II, able-bodied men went off to war and the women had to take over the jobs that men left behind. Women were empowered when they were finally given equal rights in the workforce. When the war ended, men returned from war, making previously employed women jobless again. When the men came home, many women did not want to return to domestic housework.The war provided women with the chance to learn what they were capable of and many were not ready to give it up again.

In the 1950’s, the typical husband was supposed to go to work and come home at the end of the day to a large meal and the loving care of his wife and children. Everyone in the household was expected to serve the man.

This idea even appears in a high school home economics textbook from the 1950’s. After completing school, a woman was expected to read the many books and pamphlets for reference on how to be a good wife and serve the husband. Many families still abide by the gender roles that society has pushed on them since childhood.

Those stereotypical family dynamics have remained ingrained in our society until now. People are finally realizing that it is extremely unfair and useless. Men who adhere to these outdated gender roles “are just as capable of raising children, they’ve just been told that they don’t need to be responsible for children that they helped create,” Marshal said.

Often times, even when the men attempt to raise the children equally and both parents work, most of the daily chores such as taking care of the children, husband, and house fall to the woman according to the article, “Raising Kids and Running a Household: How Working Parents Share the Load.”

The silent war of individual women trying to fight for equality has been going on for many decades, but as social media becomes more and more popular, these women are able to unite and spread their cause to everyone in the world.

Even though our society has been in such a patriarchal system for so long, there is proof that dual-parenting is more beneficial to the children and the women of the world. “Men need to realize that kids will benefit from having multiple influences and that housework shouldn’t be done by one person,” Kelly said.

Many studies such as “The Effects of Mother’s Employment on the Family and the Child” show that the children who come from dual-parenting households are very successful and have better mental health. Dual-parenting also allows both parents to work. When the family comes home, everyone does chores, allowing both of the parents to raise and spend time with the children equally.

According to PewResearchCenter, there’s been a rising trend in at-home-dads. As more mothers have taken over as the primary provider, fathers have started to become stay-at-home dads. Even then the stay-at-home-dads were insulted, criticized, and basically told that they are probably being forced to look after the kids, and the women in the work force were being told that they were neglecting their children.