Art is more than just aesthetics 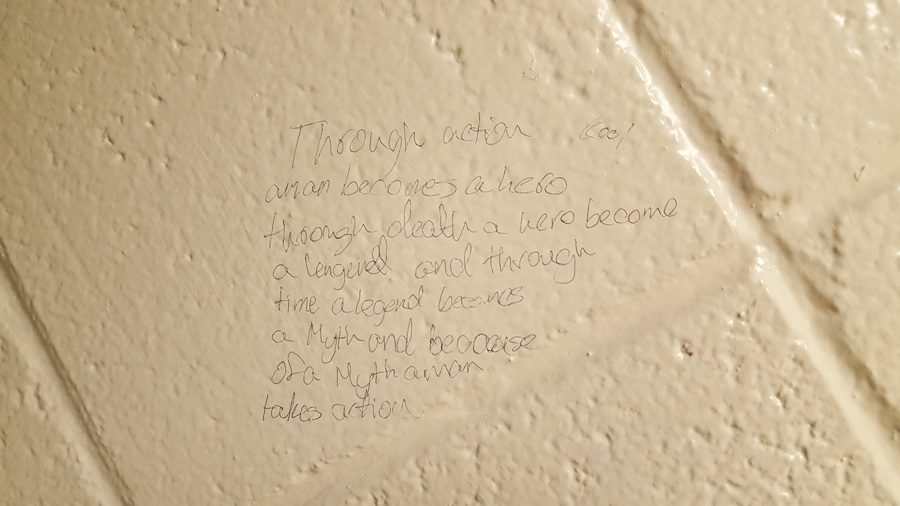 Bathroom graffiti by an anonymous student demonstrates the ability of artistic expression to also have value and meaning. While some disagree, it is certain that art is an interpretive concept left to be defined by the artist himself.

Last year, the cast of the hit Broadway musical “Hamilton” approached audience member and Vice President Mike Pence at the end of their November 18 performance.

“We, sir — we — are the diverse America who are alarmed and anxious that your new administration will not protect us, our planet, our children, our parents, or defend us and uphold our inalienable rights,” actor Brandon Victor Dixon said. “We truly hope that this show has inspired you to uphold our American values and to work on behalf of all of us.”

Both Conservatives and the press were whipped into a fervor. In a tweet, President Trump accused the show’s cast of harassing Vice President Pence and called Dixon’s words “very rude.”

Dixon’s short speech, a 57- word plea to ensure Trump’s administration would do justice to those that felt forgotten by it, brought a very important discussion to the forefront — does art serve a role, politically?

Those that agreed with President Trump’s tweet, somehow ignorant of the fact that a musical about the founding fathers would be inherently political, claimed that the cast was not only rude and harassing, but should have just sung and dance like they were paid to do.

This claim that actors and other artistic personalities should just do their job and stay away from politics is all-too common, and present on both sides of the aisle.

What those who try to box in artists fail to realize is that art is at its basest form a method of expression with no boundaries. No one can put a guideline on art, because art is an abstract concept that can only be defined by the individual creator.

The philistines that try to enforce what art should be do not care about integrity. Instead, they typically see artists, most commonly actors, as “elitists,” and get worked up when these “elites” voice their opinions. The irony in a “proud American patriot” telling another American to not voice their opinion is lost on the former.

There is no certain definition of art. Art, be it music or painting or television or film, just is. It has been and always will be, and there is nothing that can be done to stifle that. Quite the opposite, art thrives off of opposition.

Humans naturally want to do what they’re told not to. Being told you can’t do something is the number one motivator, because humans want to know not only why they can’t do something, but why shouldn’t they, and no person embodies this more than the artist.

Poet Percy Bysshe Shelley said that “poets are the unacknowledged legislators of the world,” and he could not have been any more right. Artists understand their power, and there is nothing preventing them from using it.

Artists are the peaceful revolutionaries  — those that fight without shedding blood and killing. Artists fight back with their words and their images. That being said, artists will be the earliest to revolt, because their rights tend to be taken away first. Art is freethinking, and freethinking is the last thing any oppressor wants.