The drawbacks of tolerance 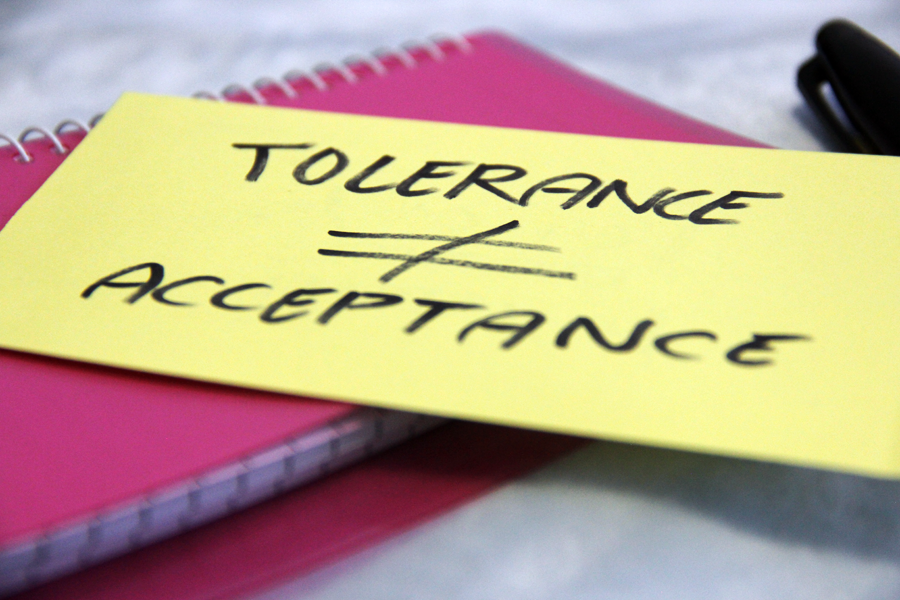 Contrary to popular belief, tolerating minority groups is not synonymous with accepting their differences. Acceptance differs from tolerance in which it evokes a sense of understanding and creates an environment of mutual respect.

In a vast world like ours, there is no doubt that every individual possesses traits that make him or her unique. An array of differences among our population, whether they pertain to race, ethnicity, religion, or sexual orientation, make the world a melting pot of diversity.

While progress has allegedly been made in providing a safe environment for minority groups, protests and rallies against them continue to plague the country. In reaction to these acts of aggression, allies have resorted to questioning how individuals can display such intolerant behavior. The underlying issue, however, is believing that merely tolerating others is equivalent to accepting them.

Not understanding the difference between both actions is a problem that our society has yet to correct. While being accepted leads to feeling comfortable enough to express one’s concerns and have them acknowledged by others, encountering tolerance means nothing more than being viewed as a non-threat. It is having one’s existence be neither disputed nor advocated for, allowing feelings of inadequacy and vulnerability to persist as no one is willing to initiate a call for change.

In other words, tolerance just isn’t enough. In times of political turmoil and debate over the rights of minorities, it is especially ineffective or, at the most, a minimal effort to end unchecked discrimination. Reflecting on our behavior toward disenfranchised groups and advocating for their fair treatment is now needed more than ever.

Taking into consideration the “Unite the Right” rally that took place in Charlottesville, Virginia, for instance, it is evident that the prejudice the majority presumed to have diminished has not gone anywhere. Led by white supremacists and neo-Nazis, the rally consisted of their followers shouting anti-Semitic statements, such as “blood and soil” and “Jews will not replace us.”

The violence that erupted in Charlottesville makes up a small percentage of the anti-Semitic practices that are growing in popularity. According to the Anti-Defamation League, hate crimes toward Jewish people and communities rose 86% between January and March. During this time frame, 541 anti-Semitic attacks and threats were made.

Several weeks earlier, President Donald Trump also banned transgender individuals from serving in the military and proceeded to call them a burden on Twitter. Moreover, the removal of transgender rights under Trump’s presidency only fuels the personal conflicts that many of them already face. According to the results of the National Transgender Discrimination Survey, over 41% of transgender individuals have attempted suicide and 78% have been harassed for their identity during grades K-12.

The culmination of these recent events reveal the need for a tolerant community to do more. As the oppression against minority groups manifests itself, it is imperative for allies to take action and ensure that they are making a meaningful impact in the lives of the minorities they come across. Being genuinely accepting of others’ differences will not only make the situations they face more bearable but also make room for inclusivity.

Although ending discrimination on a large scale is unlikely to happen, it is possible to relieve its effect on minorities by listening to their concerns and demanding their justice.

As a Latina, I have personally felt targeted by the words and motives of countless individuals these past several months. Knowing that the large majority of them do not view highly of my heritage oftentimes takes a toll on my self-esteem.

I cannot alter the rationale of those who do not share my beliefs, but immersing myself in a community of people who accept me for who I am has the capability of making me and other minorities feel less alone. Finding a supportive group as described, however, is difficult when people are led into a false belief that being tolerant is enough.

To put things into perspective, tolerating minorities is neither making progress nor damaging it. It is doing nothing at all. Although being anything but hostile towards minority groups may seem reasonable from an outsider’s perspective, it is anything but progressive when no one is willing to lend a hand in times of crisis. As minorities figuratively find themselves stranded at sea, they struggle to reach help yet are told to be grateful they haven’t been attacked by sharks.

Except displaying tolerance toward others isn’t inherently a mistake. It should be stated that I expect strangers and people who do not know me well to tolerate my presence. With my friends, family members, and professed allies, on the other hand, it’s a different story.

Tolerance is the ability to withstand something that one does not entirely agree with. When I inform others about myself, I do not want my ethnicity nor underrepresented characteristics to be condoned. I want to be accepted for who I am and not feel ashamed to mention my upbringing as if it were a taboo subject.

Helping minorities gain a sense of belonging does not also have to involve putting us on a pedestal. We simply want to be treated like everyone else, receive mutual understanding, and have an outlet to express our worries without being blatantly ignored.

It is only by taking action and engaging in self-reflection that minority groups can be rescued from the depths of prejudice.