Legal documents use the term “sex” differently than the LGBTQ+ community 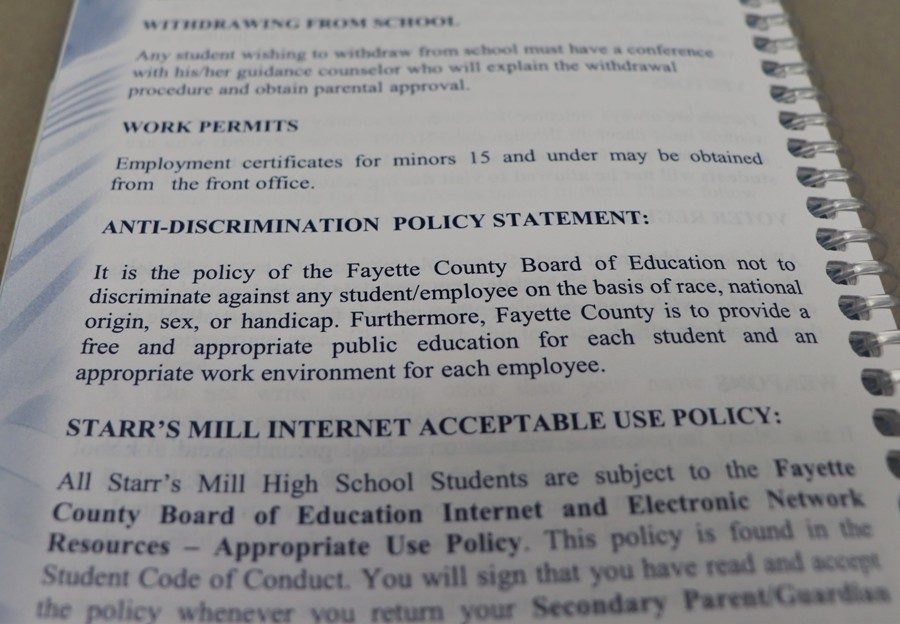 The student anti-discrimination policy is found on page 30 of the Starr’s Mill High School student agenda. Though the policy is technically inclusive, it neglects to differentiate between sexuality and gender.

In the years leading up to 2017, the United States has made great strides toward recognizing and accepting various members of the LGBTQ+ community.  Starr’s Mill is no stranger to these progressive decisions, adding gender neutral bathrooms in 2016 and creating a Gay Straight Alliance club in 2017.

On a national level, however, progress has been stunted with the election of Donald Trump who, in the first 100 days of his reign, has enacted many anti-LGBTQ+ policies and practices that worry the LGBTQ+ community. The day after sworn into office the LGBTQ+ related content from the Department of State website was taken down. Then ten days later there was a leaked draft of the “Religious Freedom” act which allowed businesses to discriminate and refuse service to LGBTQ+ people and many LGBTQ+ people were glad it was not signed into law. Then on Feb. 22 the federal jurisdiction over facilities for transgender people was essentially repealed and the power was given to the states.

Many of Trump’s anti-LGBTQ+ policies made community members uncertain of their safety in the U.S. This means it is especially important nowadays for the people of the LGBTQ+ community to be aware of their rights so they are not treated unjustly.

As much as the LGBTQ+ community is aligned together on the purpose of progressiveness, the community and government are not always aligned when it comes to the usage of terms like gender identity, sex, and sexual orientation.

Many times the legal meanings of a word differ from the common vernacular of society, but when it comes to discrimination people need to able to recognize their individual rights. “They should really make it clear that LGBTQ+ is protected in discrimination under the [Fayette County Code of Conduct and Starr’s Mill student handbook],” junior Jane Lawrence said.

The 2017-2018 Fayette County Code of Conduct states, “the Fayette County School District does not discriminate based on race, color, religion, national origin, age, disability or gender in employment decisions or educational programs and activities, including its athletic programs.”

The LGBTQ+ community does not seem to have a set definition for the term “sex,” but even at the national level, the discrimination policy uses “sex” to mean sexuality/perceived sexual orientation and gender according to the U.S. Equal Employment Opportunity Commission.

Meanwhile, the 2017-2018 Starr’s Mill student handbook’s discrimination policy says no one is allowed to “discriminate against any student/employee on the basis of race, national origin, sex, or handicap.” This policy also legally includes gender and sexual orientation, but without further research into government documents the general public may interpret the policy to be non-inclusive of the LGBTQ+ community.

The government and LGBTQ+ community needs to unite on single definitions for key terms like “sex” to eliminate confusion and unify our society.