Don’t ‘zzz’ on the next generation

Today’s teens: creative and killing it 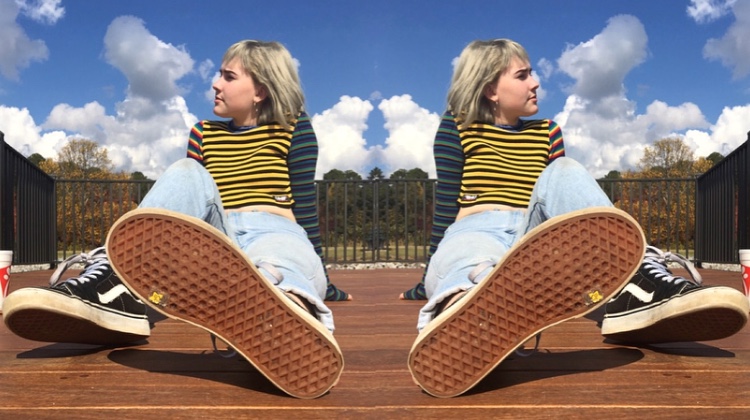 A member of Generation Z poses for an Instagram photo. Images such as this exemplify the experience of today’s youth, which lies at the intersection between the internet and creativity.

Generations aren’t real. Like most things we place heavy importance on, they are societal fabrications. There is no scientific mechanism by which one can divide the populace into age-related categories, except for instances of population boom. And yet we do, and we throw all-encompassing characteristics to go along with the arbitrary monikers. Whether this technique is just useless categorization or a system of utility, it seems with the onset of technology, this sociological concept has transformed into a full-on obsession.

There’s been think piece after think piece both indicting and defending Millennials, and this controversy has bled into popular culture, from last year’s avocado toast versus housing memes to dubbing the official color of 2016 “Millennial pink.” Similar questions are being asked again and again: Is it fair to apply the traits of laziness and inattentiveness to the entirety of the Millennial generation? (It’s not.) Are there actual trends that can be observed within all of an age range? (Yes and no — it’s all shades of gray.) And even if we can find these trends, do they mean anything? (Anything matters if you really want it to.)

But it’s all focused on the baby boomer/Millennial culture clash, the people who occupy the workplace and are paid to write the stale think pieces. In contrast, there isn’t too much literature on the age range that makes up over twenty percent of the United States population — kids.

Late nineties on. With the beginning of the new millennium. Post 9/11. There’s a lot of theories about where this new generation begins and little to no consensus about when it ends. Some even group these kids in with the Millennial cohort, because it seems just too soon to make any kind of conclusions. Only a few facts that seem to be agreed upon: they’re called Generation Z (or iGen, or Digital Natives), they grew up with the internet, and they’re a disaster.

I mean, sure, those “Stranger Things” kids sure are cute, but for the most part anyone under twenty is seen as a social media-obsessed gremlin whose relationship with reality is all but nonexistent. When Generation Z is brought up, it’s typically met with scoffs, even by its members. And that makes sense, because no one likes teenagers, even if they aren’t as bad as people think.

This lack of interest in our youth has a price, though. There’s so much that could be explored and documented, an entire culture that usually only rears its head between the lines of offbeat teen internet comedy — a brilliant medium that is unfortunate in that it is impermanent, cryptic, and tends to get lost in the vast expanses of information available in the digital landscape. I mean, what are these kids really like? Will their future successes be thanks to the internet or in spite of it? Is this difficult to grasp teen culture, born from the digital age, actually distinct or is it only part of social media’s cycle of conformity? All are questions that are probably impossible to answer satisfyingly, and certainly not scientifically, but let’s give it a whirl.

The internet is the toxic best friend

Sometimes you need a break, even when it’s just trying to help.

Their relationship with the internet is definitely two-sided. Generation Z’ers, while inextricably linked to their phones and the constant stream of information they provide, have not lost the capacity for analytical thought.

Because teenagers are so mercilessly (and rightfully) warned, more than any other age bracket, of the consequences that constant internet presents, the fear of becoming a character in a Ray Bradbury novel is one that’s embedded firmly into youth consciousness. It’s not an absolute awareness, but simply discussing the subject with kids reveals the simple fact that they know what’s at stake. Like any logical individual, the average teenager is painfully aware of the opportunity cost, of the moments they miss when they’re plastered to their smartphones.

As a result, “going offline” is a trend. It’s often half-hearted, but there’s a clear willingness to separate oneself from the internet, and an understanding that overexposure is very real and often very damaging. That’s why kids may delete their social media apps every once in a while, and when they’re not doing that, they’re utilizing the internet for something much less superficial: diary entries. “Fake instagram” or “finsta,” for example, has evolved not only as means to hide the more scandalous sides of high school life, but as a way to be honest and to reflect on areas for self-improvement and future goals. It’s all about how you use the internet rather than its inherent presence, and Generation Z is taking advantage of this subtle difference in a big way.

The self-love movement and what we’ve learned

Don’t be a jerk? To anyone? Ever? Sounds good.

Despite Generation Z not being completely complicit in the onset of social media, and the skin-deep, “keeping up appearances” ideals it imbues, the effect has been felt deeply. The beginnings of social media were marked by the mindless proliferation of beauty standards and status symbols, and a deeper change in the teenage psyche was needed to change the tide.

These problems the internet brought have been addressed by the generation on a seemingly counterintuitive landscape: the internet itself. People here and there began to encourage self-love and spread awareness for mental health. These movements are not particularly original in their ideals, but in their time they were radical, responding to an internet humor that was for a long time drenched in cynicism – -and still is, to an extent. But at its heart the generation has made known what it values. For much of the harmful content that the internet has proliferated, there is content dedicated to progress, with everything from detailed how-to guides to the simplest truisms about positivity, all of which have affected the world’s youngest.

This attitude spills into Generation Z activism. Studies show the generation is the most diverse and the most accepting of social change. Despite fears for the future and areas of disagreement, most members of the generation are insistent on the fact that inclusivity matters. The minutiae of it can get touchy, but today’s teenagers have reached consensus where many other generations have not. In other words, every member of Generation Z, no matter their background, is worthy of and contributes to the internet’s newfound fascination with self-care, and more essentially, its aversion to self-destruction.

Because the world of the average teenager is so saturated by images spread online, there is a clear impact to Generation Z’s behavior and values. While it is true that there is a lot of superficiality on the internet, there’s also a prominent circulation of art. This has culminated in a generation that maintains a strong creative spirit.

It’s popular to be different. There’s endless outlets for it with the doors that social media has opened, such as video production via sites like Youtube, but traditional media is not at all forgotten. Students still enjoy and discuss online their hobbies of drawing, writing, music, and research. Even if not directly involved in the arts, most teenagers recognize avant-garde fashion and the more out-there expressions of creativity, and they appreciate them rather than rejecting them.

More than that, there’s an awareness of work ethic. Students are hyper-aware of procrastination and errors in decision making, simply because examples of perfection are showcased everywhere they look online. “studyblr” is an example of this phenomenon. While the success of others is not the optimal motivator, it’s something to at least get students thinking about their future, and what’s the right fit for them: whether they want to be college-bound or not, and what obstacles they face either way. Regardless, they’re ready to put in effort and will continue these habits all the way into the workplace.

And yet, none of this is absolute. Every individual is unique, and so no generation has much in common aside from age. But all things considered, when looking at today’s youngest, there are positive trends to be examined. While keeping in mind everyone’s personal nuance, but valuing the vast potential each member of this age bracket has, Generation Z has the potential to change the world.