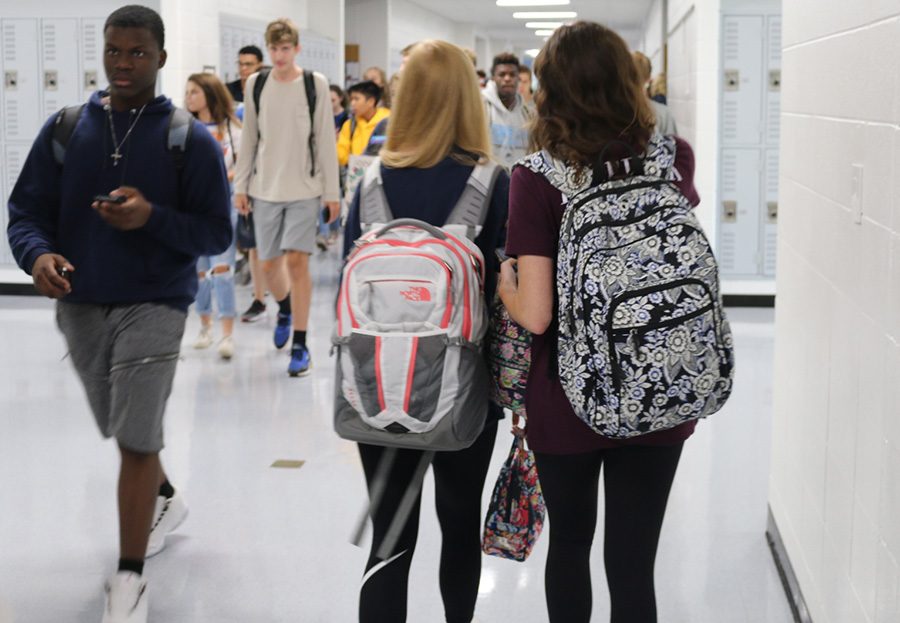 Students wearing bookbags leave their classes after the end of seventh period, the only period of the day when bookbags are allowed in classrooms. The administration argues that this new policy will provide the school with more safety, but in reality, it only creates more inconveniences for the students.

The school year has began once again, and with it are newly implemented rules. One rule in specific that is an ongoing topic of conversation for many students these past few weeks has been the infamous “bookbag policy.”

This new rule strips students of their rights to carry bookbags in the hallways and classrooms, causing far too many — myself included — upset Starr’s Mill attendants.

One excuse for taking on this absurd policy is for “safety reasons.” Now, reasonable and logical safety measures used in school are obviously not something I would disagree with, but I still cannot wrap my head around exactly how wearing no bookbags results in a safer school environment.

It makes no sense that this rule will keep dangerous objects such as drugs, vapes, and even guns out of school. Let me write an example: a student enters the building with a weapon in his bookbag. Yes, he is now forced to put his bookbag in his locker before first period, but if someone is deranged and sick enough to bring a lethal weapon to school, it seems that the very last thing on his mind would be whether the attack happens right before first period or during fifth.

People sick enough to commit such an act will not care what time they can do it. They can still bring a weapon to school, because bookbags are not banned from the building.

There has been an upsetting increase in teenagers with juul addictions, so I understand that the administration wants to get rid of them any way possible, but banning bookbags will do absolutely nothing to stop this epidemic. Juuls are small and can be carried anywhere: pockets, hands, purses. If a student is so addicted to nicotine that they bring it to school, they will find anywhere to place their precious item. If it’s not in their bookbags, it will just be somewhere else, possibly even in a fanny pack.

Another excuse is that bookbags have gotten “too big” for students and seem far too heavy to wear all day. While this may be true, how is banning them and instead obliging students to carry everything with only their arms a proper solution? Having to support the immense weight of large textbooks, multiple binders and folders overflowing with paperwork, entire Chromebook computers, pencil pouches — and for some students even lunch boxes — all with only one’s arms creates an extremely inconvenient situation that can easily be solved with the use of bookbags.

Bookbags have also been called “safety hazards” by our administration. They said that they got in the way of students and teachers whenever they walked around. However, now, instead of being able to place all of our material neatly in our bookbags, we are left with no choice but to have it all sprawled on the floor next to us.

Students could try to stuff some of their binders, textbooks, folders, books, agendas, and pencil cases in the small basket under our seats, but with the load of things we have to carry around, it seems very unlikely that it will actually fit.

Now, let’s say that somehow, miraculously, every single student is able to create space under the seats for their things. In seventh period, we are allowed to bring our bookbags in classrooms, so for the final period of the day, every class is filled with bookbags just like the previous years.

Is it not, using the administration’s logic, a safety hazard then, too? What happened to the worry that teachers could trip and fall over bookbags in classrooms? Does the administration just get to pick and choose when things are a hazard and when they are suddenly not?

While some of these reasons may seem logical at first, a deeper look into them makes one realize that this new bookbag rule absurd and only creates more problems for the students while doing nothing to eliminate potential threats to student health.