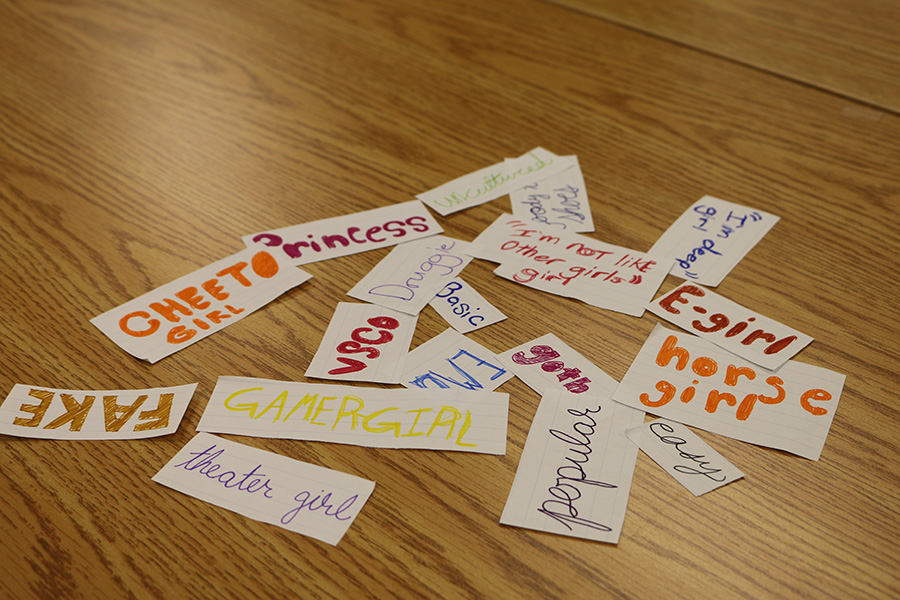 These are common labels heard around the school; perfect examples of the titles girls get tagged with usually online or incorporated into jokes. It continues to a problem shaping the way women get treated regularly in society.

Since what seems like the dawn of time, women have been labeled a variety of different things, whether it is “basic,” “easy,” “fake,” “good,” “bad,” etc. This has recently become more common through the media and needs to be taken down a notch.

If a girl wants to enjoy music that is made by popular artists today, she is called uncultured. When a girl follows popular trends in fashion or in word choice, she’s known as “basic.” It is near impossible for a girl to not be made fun of for simply breathing or talking the wrong way.

Let’s get one thing straight: this is not a new concept. Men have been putting labels on women saying “women aren’t funny,” for years — or at least since 1695, when William Congreve wrote in his treatise trying to explain his views, “maybe by reason of their Natural Coldness, Humour cannot Exert itself to that extravagant Degree, which it does in the Male Sex.”

Although this has been going on for almost forever, it does not mean that it should be accepted. This doesn’t apply to every guy out there, but men constantly use the phrase, “we can’t help it; it’s just how guys think,” and it is totally invalid. People aren’t programmed to hate and make fun of others; it is a learned trait.

Small memes or comments are slowly shaping how boys treat the girls around them for doing nothing more than wearing the wrong accessory or hairstyle. A lot of Instagram or Snapchat jokes involve objectifying women. This could even be just a meme about guys only talking to girls to get with them later or to make fun of them.

Some jokes are made for shock value, which can be funny, but enough of these can start to indirectly influence the ways guys act. For example, when a guy sees a joke on his Instagram feed about a guy having five girlfriends, he may start to think it is okay. On the extreme side, some of these are white supremacists trying to spread their radical ideas, including degrading women, to young, naive teens.

“Social media and vloggers are actively laying the groundwork in white teens to turn them into alt-right/white supremacists,” [Joanna Schroeder] wrote. “It’s a system I believe is purposefully created to disillusion white boys away from progressive/liberal perspectives.”

A lot of these ideas include disrespecting women, and they discourage respecting other people as equals. They even attack chivalry. What happened to chivalry? Many say it’s dead, while others fight back saying that they just aren’t looking in the right places. While this may be true, it isn’t embraced in the places it is needed most.

Holding doors open, saying “sir” or “ma’am,” and other mannerly acts are still alive and apparent if you really look for them. These aren’t what people mean by chivalry being dead. They are talking about the general respect a man or woman has for others.

Men especially have objectified, made fun of, and bullied women for nothing more than looking a certain way. Like I said before, this has been happening for a long time. This way of acting has been glorified recently through small comments from people on shows or by politicians.

For instance, in some shows, the “popular” guys are making fun of a girl in his class and everyone starts laughing. This could make boys start thinking it’s encouraged to act this way.

In actuality, the only way to fix the problem is through understanding. Lots of men don’t even realize this is a problem because they don’t see it happening, but it is guaranteed that most of the girls in this school have experienced being unreasonably objectified or degraded for being a female.

Extremities are quickly covered up by making jokes about what has happened or using the phrase, “It’s just guys being guys.” Labeling, degrading, and altogether disrespecting women have become an unreasonable social norm that needs to be brought to an end. Understanding is the key to this. Not every man in the world participates in these acts, and some may have begun to see it happening, so there is hope, but there is still plenty of work to be done.