Opinion: College athletes are not professionals 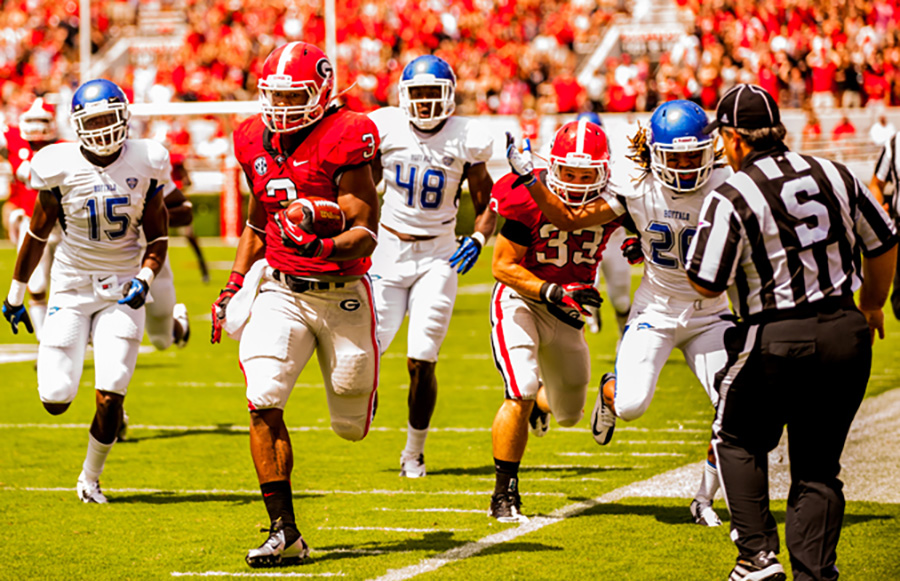 "Football Favorite on the Move - UGA #3 Goes Pro" by Cassie Wright is licensed under CC BY-NC 4.0

Todd Gurley (number 3) bringing Georgia to victory in July of 2015. He is a great example of college athletes playing their hardest based off how much they love the sport, without having feeling like they should get money for it. This is why college student-athletes shouldn’t get paid as amateurs.

There has been a long-running debate about whether colleges should start paying student-athletes. This should not even be a question — they are already paid.

Colleges have tons of other things to pay for anyway. Paying their athletes more will make them employees instead of students going to college for an education.

Many athletes earn scholarships, which help pay for their tuition, supplies, housing, and sporting equipment. While regular students can still receive scholarships, they usually do not receive as hefty of scholarships as athletes who often receive more than $100,000 over four years.

According to the NCAA, while thousands of other regular students are drowning in debt that will take many years to pay off, colleges are basically paying for athletes to attend their schools.

Less than 2% of college athletes go on to be professional athletes. Paying them will only make them employees, driving them away from their education.

After the four years, the other 98% of these athletes attend their schools, they need to go out into the workforce in which they will not be ready because of spending all their time and effort into their sport.

Colleges also have faculty, housing, and taxes to pay. At public four-year institutions, 28% goes to faculty salaries and benefits. The most prominent factor that colleges have to pay for is a combined category of student services, and academic and institutional supports.

This includes non-instructional activities, such as admissions, student activities, libraries, and administrative and executive activities. All this wraps up at about 65% of expenses at four-year private institutions.

Let’s say each player is paid $500 each hour they play. Well, there are at least 16 games per season, so, not including overtime, each player would get a little over $16,000 every season. This means that a college would have to pay one team about $1,360,000. The college football industry would be paying their players over $176,800,000 every season.

These athletes may then consider themselves professionals. The line between amateur and professional is continuing to blur, especially when money is involved. College athletics by definition are still considered to be amateur.

“From the start, amateurism in college sports has been honored more often in principle than in fact; the NCAA was built of a mixture of noble and venal impulses,” wrote Taylor Branch from the Atlantic. Paying college athletes would almost erase the line between amateurism and professionals.

The Greek ideal is to focus on intellect and education with some form of sport to complement. I believe that is the whole point of having college sports. Paying student-athletes more would turn them into employees instead of students looking forward to a bright future.