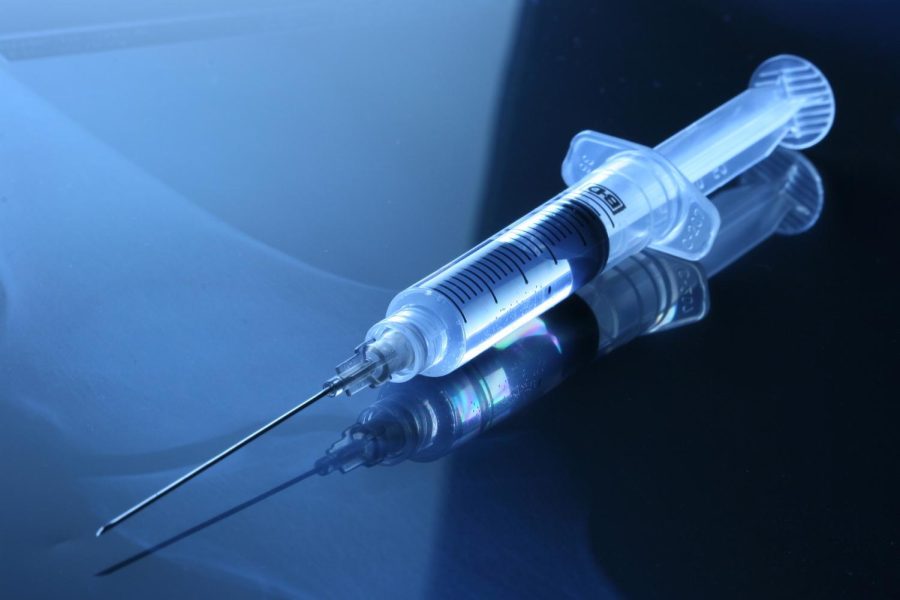 Medical needle lays on a table. Discussion of whether or not euthanasia should be used in order to treat patients has been a topic of debate for years. (Photo via Pixabay (Triggermouse))

Medical needle lays on a table. Discussion of whether or not euthanasia should be used in order to treat patients has been a topic of debate for years.

The argument surrounding euthanasia is a blurry line of morals and control over one’s life. It is a controversial topic that still does not have an exact answer. Staff Writers Adeline Harper and Ashton Lewandowski argue their opinions based on the legality and morality of medically assisted suicide.

War. Bloodshed on the battlefield. Gunshots ring out. A soldier comes across a fatally wounded enemy crying out in pain. It is obvious to the soldier that the foe is destined to bleed out soon. His fate is inevitable. The soldier proceeds to fire his weapon at the shrieking man, instantly killing him. The soldier did this not out of malice or hate, but out of empathy.

This practice, while a war crime, is more common than one would think. Soldiers have been killing out of mercy ever since the dawn of conflict. This action hits closer to home than many realize.

The right to try should be expanded to include euthanization, in order to give those that want to request it through a legal means an honorable death.”

Mercy killing in war is the same as putting a severely wounded animal out of its misery. The scenario is ugly, no matter how you put it, but it is necessary in order to prevent further unnecessary suffering. The same argument can be applied to humans and medical euthanasia.

Medical euthanization should be legalized. There are many different reasons a person may request medical euthanization. Whatever the reason, it carries with it an implied sense of suffering. In circumstances where patients are seeking euthanasia, the suffering they are facing has surpassed their will to live.

In the United States, committing suicide is not an illegal offense. Bed-ridden patients who are unable to receive proper euthanization will either refuse to drink or eat in a horrific fashion until death, or continue to waste away living in absolute misery. It should be morally acceptable to provide a way for patients to self-terminate in a peaceful way. It is cruel to leave them to suffer by refusing to alleviate their pain.

Legalizing euthanization might even be a relatively easy task to accomplish. In the Supreme Court case Cruzan vs Director, the right to refuse lifesaving medical treatment was directly realized. The right to euthanization can be construed by using this case as a base for future rights to be discerned. The constitutional right to self-determination would only have to be interpreted as such, unlike some other controversial issues which would require legislation to recognize legality.

Regardless, legislation for patients to have the freedom to choose what medical procedures to attempt already exists. It just needs to be expanded in order to provide a pathway for euthanasia.

In the same manner of former President Trump’s ‘Right to Try,’ which allows seriously ill patients to try experimental drugs in an attempt to help with their illness, patients should have a right to choose whatever medical treatment they personally deem fit for them, with their doctor’s knowledgeable assistance. The right to try should be expanded to include euthanization, in order to give those that want to request it through a legal means an honorable death.

The legalization of euthanization would end unnecessary suffering and create a pathway for those who want to die in order to do it in a safe manner. It is not only logical but morally instrumental to allow patients the right to self-determination.

Many people argue that people should have control over their lives and should be able to end their suffering. While this is true, it is basically murder, but with consent. ”

Euthanasia in a all countries should be illegal. Not only does it end an innocent person’s life but it also violates many moral codes in religion. There are other ways people can relieve pain such as anesthesia, pain meds, and other prescribed medications.

In 400 B.C. a philosopher and Greek doctor named Hippocrates wrote the Hippocratic Oath. It states, “I will neither give a deadly drug to anybody who asked for it, nor will I make a suggestion to this effect.” If doctors kill their patients they would be violating the Hippocratic Oath while at the same time “playing God.”

From a religious stand point, euthanasia is highly frowned upon in many religions. Christians believe that euthanasia is murder, because it is the decision to end someone’s life. Other religions such as Buddhism are openly against it.

Many people argue that people should have control over their lives and should be able to end their suffering. While this is true, it is basically murder, but with consent.

If a suicidal person that is not in a hospital asked their friend to help them kill themselves, that friend would not get the benefit of the doubt at court by saying, “They wanted to die and asked me to help them.” They would go to prison for assisted murder/suicide. The same should be applied to doctors.