That’s a wrap on bubble wrap 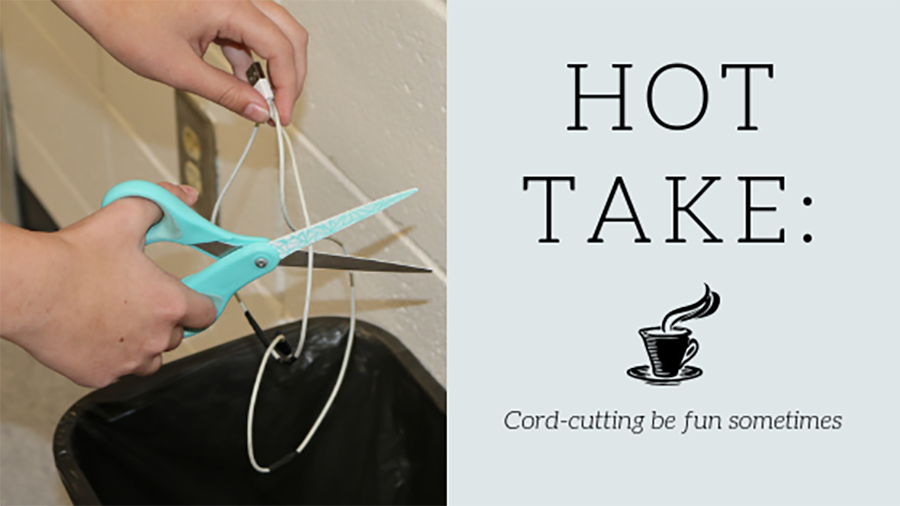 Student stands in front of a trash can about to cut up a charging cord that has somehow survived thanks to some old fashioned electrical tape. Popping bubble wrap is a cacophony compared to cutting up a phone charging cord.

So here’s a hot take: cutting up phone chargers with scissors is the most calming thing you could ever do with your life.

We all know the long-standing, anxiety-easing, stress-decreasing, and satisfaction-guaranteeing bubble wrap. It’s just been that one reason anyone is still excited to receive packages in the mail.

Yeah maybe the gift is cool too, but let’s be honest, the bubble wrap is the most important thing coming out of any package.

Or at least it was, until one quiet night when I was knocking out some homework, I found the charging cord on my phone had ripped. And not just any rip, but about a half inch long rip, exposing all the wires inside.

I finished charging my phone because, well, I care about my phone being charged much more than the possibility of being shocked by my charging cord. Then I decided that my three-year-old cord had lived its last day.

And to make sure all possibilities of being electrocuted by this cord were eliminated, I took a pair of scissors and cut the cord in half. It was music to my ears.

It had that same snap of popping bubble wrap but I could also hear the scissor blades grind together to make that subtle sound that’s like a cartoon ninja unsheathing its sword.

The sound alone is amazing to listen to and has total ASMR vibes, but then you also get to feel the snap of the scissors finally cutting through the wires for instant gratification. I could spend hours cutting up charging cords just because of that snap.

So since bubble wrap isn’t always guaranteed to be on hand unless you either horde scraps of it or buy the industrial tube of bubble wrap, you can always go to the local dollar store and pick up a charging cord to replace the one you just cut up in your free time.