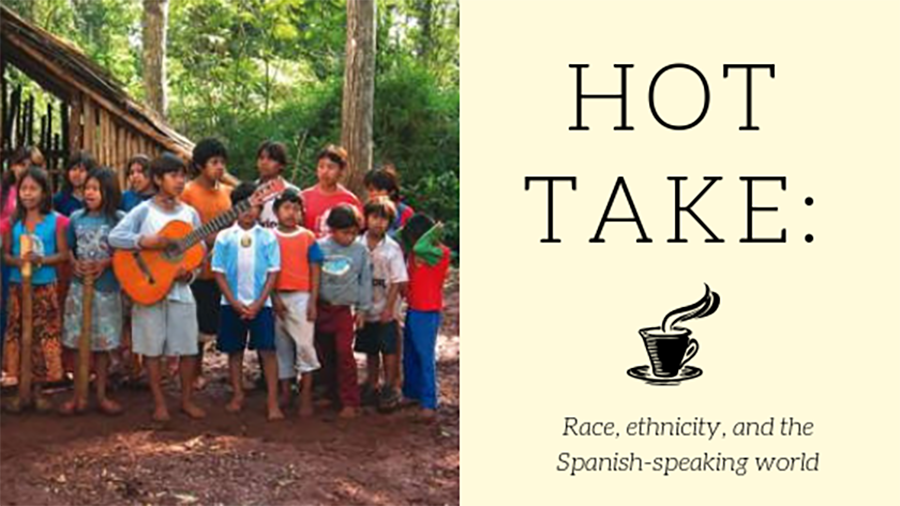 The children in this photo are part of the Guarani tribe in Salta, Argentina. They should not be cast aside and ignored when speaking of Argentina because they, too, are a part of this country.

Here’s a hot take: it’s time that the difference between race and ethnicity is finally discussed in detail, and many people still do not (or refuse to) understand the complexities between the two.

It has been causing an amount of unnecessary quarrels between people, and it is a problem that needs fixing.

For example, an argument that has recently blown up on social media is the fact that one cannot be Latino because they are white. The person that stated this decided to call the entire country of Argentina “white,” and went on even further to say its residents are not Latinos.

This is not at all true, and declaring this is deeply problematic.

Race does not equate to where one is from, for most countries are filled with many different types of races. Take the United States for example: in this country, the population is made up of black, white, Asian, and indigenous people that all fall under the category of being American.

Latin America has a large population of all types of races as well — black, white, Asian, indigenous and mestizo people all live in these countries and contribute to the culture. All the people living there, no matter the color of their skin, are Latin American because they live in and were raised there.

However, a common mistake that is made is calling Brazilians Hispanic and Spaniards Latinos. Brazil was colonized by Portugal instead of Spain, and therefore its inhabitants speak Portuguese, not Spanish. This makes Brazilians not Hispanic, but still Latino, considering the fact that Brazil is in Latin America.

Spain is in Europe, not Latin America. Hence, its residents are not Latino, but still Hispanic since it is a Spanish-speaking country.

The differences between each word have been made clear, so let’s go back and evaluate exactly why what that person said is problematic. Argentina has a high population of white Latinos compared to most other Latin American countries due to the Argentine government committing a massive genocide against the native Argentines, wiping out a grand portion of their population.

Black Argentines were also nearly completely wiped out because of the Argentine government doing horrendous things such as having Afro-Argentine men as “human shields” during the Paraguayan War of 1865. This war left a heavily disproportionate ratio of black women to men, forcing many of the women to have children with non-black partners.

Also, former President of Argentina Domingo Sarmiento’s “genocide was so successful that Afro-Argentines were nearly wiped out by the end of the 19th century; by the 1895 national census, the government didn’t even bother to recognize their existence.”

The tremendous racism and monstrous actions toward Argentines of color that took place is not unknown to its citizens.

Unfortunately, many rich white Argentines claim to be proud of the fact that the country is so “white,” and many of these are from the province of Buenos Aires, the industrial capital of Argentina. Many of these “Chetos,” an Argentine word used to describe someone as snobby, are seen as arrogant, racist, and discriminatory to the outside provinces that consist of more people of color.

As someone from outside the province of Buenos Aires, I know how these people view us. Chetos call the people living in the rural areas uneducated, poor, and “darker,” for many still believe that the whiter you are, the more superior you are.

Chetos say this because many of these outside provinces are not exposed to good public education or resources, and poverty is a tremendous problem here as well. Another thing that they know about the interior provinces is that there is a greater deal of indigenous people and brown Argentines.

Provinces, especially (but not limited only to) ones like Salta, Jujuy, Chaco, and Tucuman have heavily concentrated amounts of indigenous and brown people that, despite everything that the government has put them through, are still an important part of the country and still continue to contribute to the Argentine culture.

They are the true natives of this land and deserve the respect of every single Argentine, especially the rich white Chetos who continue to view them as “inferior.”

What the so-called social activist said about the entire country of Argentina being “white” and non-Latino is giving these racist Buenos Aires Argentines who see themselves as superior due to their European ancestry and richness exactly what they want to hear.

They want nothing to do with the impoverished Argentines of color in the interior provinces, and want nothing more than for them to be forgotten and ignored by the rest of the world.

Recognizing the heavily European-influenced population in Argentina is factual evidence and fine, but calling the entire country white only casts aside and ignores the people of color that reside in so many areas of this large, melting pot of a nation.

This is a generalization that only benefits the discriminators that do not want to recognize the beauty, power and existence of the native people.