Immigrants are not ‘stealing’ Americans jobs 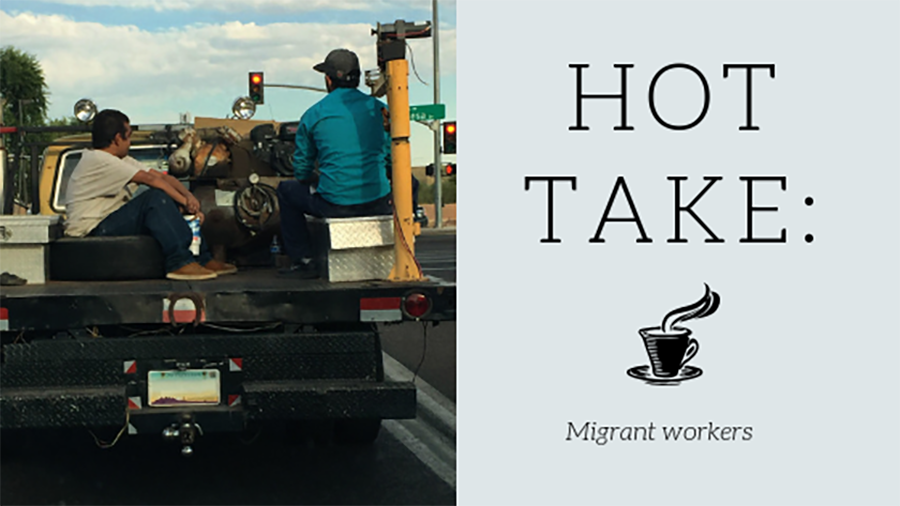 "Take A Ride"by Midnight Believer is licensed under CC PDM 1.0

Immigrant workers on their way to work. They deserve to be recognized for their hard work and contribution to the country instead of being accused of “taking” the jobs of Americans.

Here’s a hot take: Many Americans, who are the sons and daughters of immigrant workers themselves, need to realize that they are demonstrating pure hypocrisy whenever they complain about immigrants “taking” their jobs.

Many people, not only in this community but in this country as a whole, have been and continue to constantly accuse migrant workers of stealing the jobs of Americans. Included in this pool of accusers is President Donald Trump, a man who has made it clear since the beginning of his presidential campaign that he believes both documented and undocumented immigrants are responsible for taking away jobs from Americans.

This is not the case at all. In fact, many professionals believe the exact opposite of what Trump and his fellow supporters think. Brookings Institution member Vanda Felbab-Brown wrote about the truth with undocumented immigrant workers, saying that they “often work the unpleasant, back-breaking jobs that native-born workers are not willing to do.”

As a daughter of two immigrant parents, seeing the president talk down on them and paint them as a menace to fellow Americans deeply upsets me. I, along with thousands of other children of immigrants, can proudly say that my parents have not “stolen” jobs from any Americans — they have worked tirelessly, persistently, and sacrificed so much of themselves in order to get where they are today.

The National Academics of Science, Engineering, and Medicine and economic professors from Cornell, Princeton and Harvard Universities have also proved in studies that immigrants are not robbing any Americans of their jobs. Actually, a New York Times article showed that immigrants skilled in maths and sciences have “spurred innovation, helping to create jobs” and have positively impacted Americans.

Not only do immigrants help create jobs and open businesses that could help employ Americans, they contribute to the government’s budget as well. As Francine Blau from Cornell found, “by the third generation, immigrant families contribute about $223 billion a year to government finances.”

Those bashing migrant workers for coming to the United States and making an honest, hard-earned living must have forgotten that their immigrant European ancestors did the same exact thing.

Had it not been for them and their ability to get a job in this country, they would not be able to flaunt around their title of being “American.”