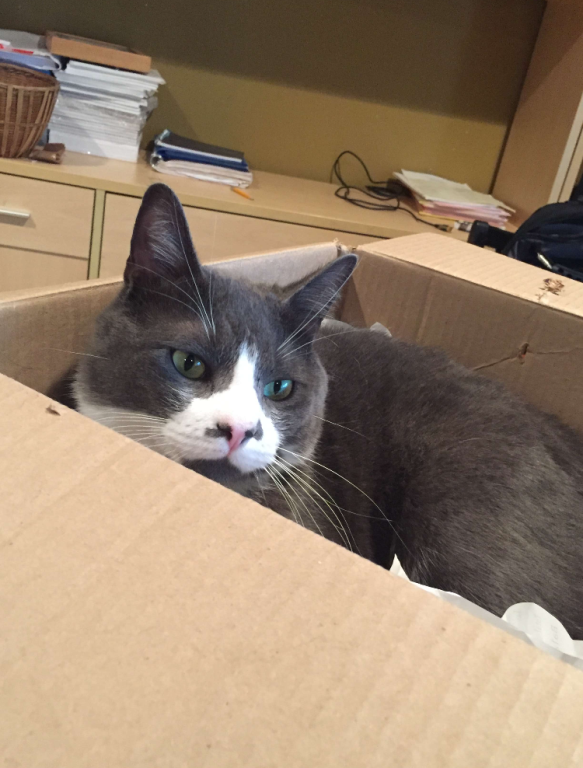 Mittens the cat happily sits inside a cardboard box, but the actual Schrodinger’s Cat experiment is completely theoretical.

I had an epiphany the other day while driving home from school. I saw a little sticker on the back of a minivan. It was a little ‘best dad ever’ sticker. We may never know who the best dad in the world is, and until then, every dad is the best dad, at the same time.

The person that is responsible for all dads being the best simultaneously is Erwin Schrodinger who was a physicist that proposed a situation with a cat, a box, a radioactive element, a hammer, a Geiger Counter, and a poison flask.

The radioactive element would decay unpredictably setting off the Geiger Counter that triggers the hammer smashing the poison flask. He theorized that if the cat was placed inside the box, the cat’s death is completely unpredictable.

At this point, no one would be able to determine if that cat would live or not. This theoretical experiment is called Schrodinger’s cat. Since no one can see inside the box, no one can know if the cat is alive. At this point the cat is considered both dead and alive at the same time.

The theory affects everyday student life as well. The next time someone asks you how you did on a test, you can tell them you passed because at that point, you have. Say you are taking a test, and your teacher has not graded your paper yet. So the ‘cat is in the box’ and there is no way to know if you have passed or failed your test.

At this point, you have both passed and failed your test at the same time. This knowledge cannot only be applied to tests, but to many areas of life, like going to Mars.

Until someone goes up into space and travels to Mars, ‘the cat’ is still inside ‘the box’ and no one knows who it will be. So until then, you, your friend, and your first grade teacher are all the first person to land on Mars, at the same time.

So because a man in his late 40s thought of a theory, every dad is the best dad, you are considered the smartest person alive, I am the inventor of the time machine, and everyone is the President of the United States, and at the same time not.