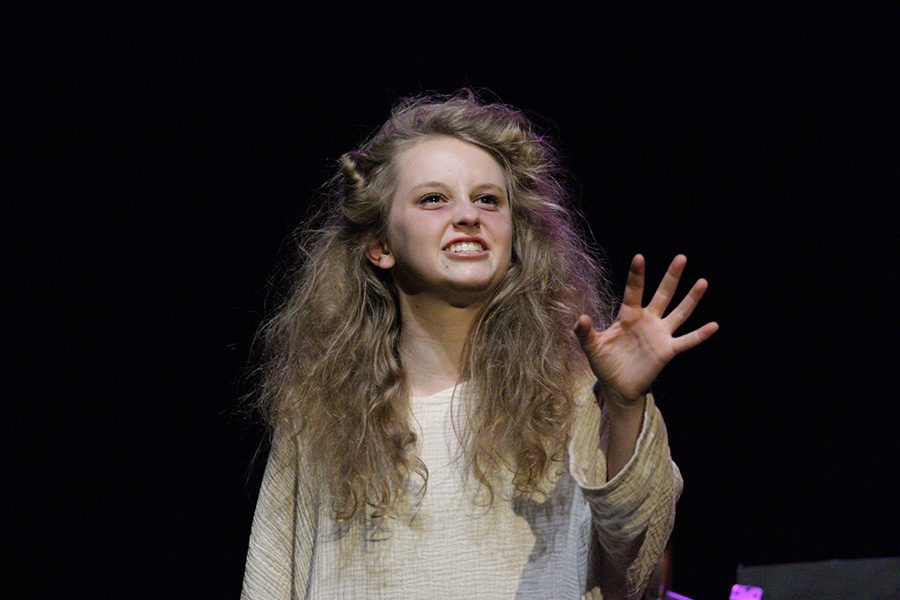 Junior Sydney Turnier delivers an absolutely stunning performance as the title character of this year’s one-act play. “The Insanity of Mary Girard” is sure to do well at the one-act competition, just as its predecessor, “These Shining Lives,” did last year.

For the second year in a row, drama teacher Savahna Silvas has directed the Starr’s Mill drama class in an absolutely amazing One Act performance that is sure to place at the One Act competition next month.

The play that the drama department is taking to competition this year, “The Insanity of Mary Girard,” tells the story of Mary Girard, the wife of a rich, high-society man from Pennsylvania in the late 18th century. Mr. Girard has admitted his wife to an insane asylum, believing her to be mentally unstable. Mary, however, believes that she has no reason to be there and wants to be released. The audience is left to wonder whether Mary is truly insane or not.

The drama class did an incredible job on the play this year, but they had a lot to live up to. Many talented actors graduated last year, leaving with many rewards and heaps of experience under their belts. The loss of Jo Dearman, Cara Clements and their peers, can still be felt. The cast of last year’s award-winning One Act play “These Shining Lives” set a high bar, but even with some losses, the drama department continues to shine.

Standout performances included junior Sydney Turnier as Mary. Her performance was truly moving, and even more convincing. For almost an hour, I was lost in Mary Girard’s tragedy and heartache. This is a play that really makes you think. You don’t just watch it — you think about what the truth is and what really happened. It is haunting, and what makes it so are the performances each cast member gives. The play is, in my humble opinion, guaranteed an award and a perfectly suitable successor to last year.

If you happened to miss the performances  last weekend, don’t worry! The cast will be performing it again for competition at 10 a.m. this Saturday at Whitewater High School. Don’t pass up the opportunity to witness “The Insanity of Mary Girard” for yourself. It is well worth the short drive.