Dedication is a universal language 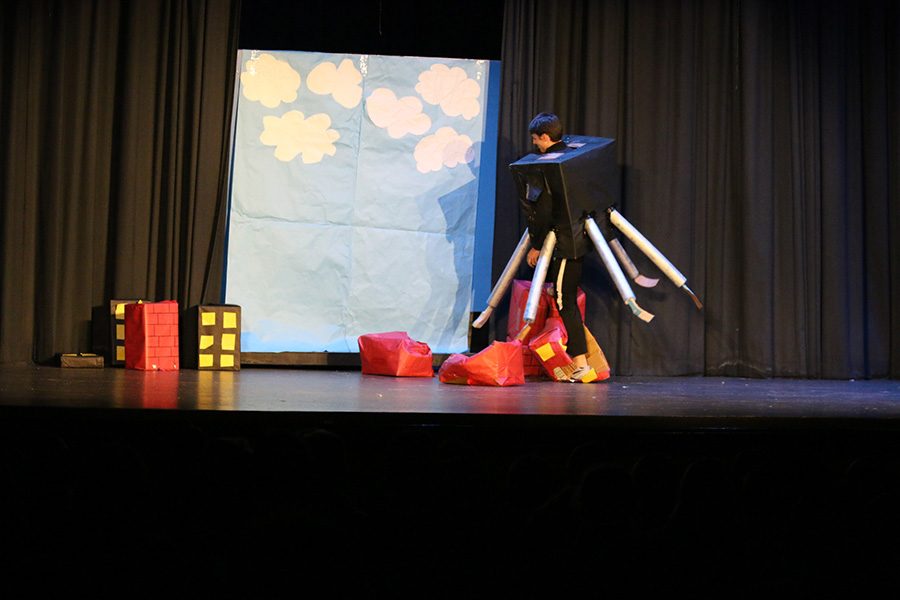 Senior Luke Presley dressed as the robot from “The Incredibles” destroys a city of cardboard boxes to fill his role in this year’s foreign language plays. It’s a tradition at Starr’s Mill for fourth-year language students to put on plays for their fellow classmates and this year brought about four successful and hilarious performances.

Every year, on the last day before Thanksgiving Break, fourth-year foreign language students present a ten-minute play for their fellow students to enjoy. This year, the Spanish classes presented renditions of “The Incredibles” and “Madagascar” while the French class performed “Scooby-Doo” and the German class did “Hercules.” Each class worked on the plays for weeks leading up to the day of their performances, and their dedication clearly showed in each performance’s laugh-out-loud humor and well-planned costumes.

But why take this much time to put on these plays? Department head Laura Alldredge explained, “It’s part of the curriculum. The standard for fourth-year language courses is that students will prepare and present original essays, poems, skits, or stories. Before I even came [to Starr’s Mill], it was a tradition to put on plays as a fun and entertaining way to meet this standard.” This method certainly works as fourth-year students eagerly look forward to their performance each year and work tirelessly to put on the best performance possible.

Spanish is different from the other foreign language classes because they almost always have two classes put on plays instead of one. Each class period is able to choose their own play and rewrite the script to fit their ten-minute limit. They must also design props and costumes, as well as memorize the lines and organize scenes. This year, one class chose to perform “The Incredibles” while the other chose “Madagascar.”

“The Incredibles” was, in short, incredible. The students did an amazing job designing the set, and as a former fourth-year language student, I understand just how difficult it can be to make everything look neat and organized with limited time and supplies. Each scene that they included was important to the play and designed well, but the highlight of the show was truly each individual actor’s performance. Everyone had excellent and accurate costumes and everyone remembered their lines very well. Their Spanish was easy to understand, and even for those in the audience who don’t know the language, their acting was able to help the audience’s understanding and pull the whole performance together.

The second Spanish class chose to perform a rendition of the movie “Madagascar.” It was clear from everyone’s knowledge of their lines and the clever sets that a lot of care and hard work was put into the play. Unlike “The Incredibles,” “Madagascar” had to figure out how to appear as animals because the main characters are all animals from Central Park Zoo. To overcome this obstacle, each student wore a onesie resembling the animal they were supposed to be. From zebras and lions to Monkeys and penguins, everyone was able to make sure they looked like an animal and in a funny way no less. The penguins even wore orange crocks and made flippers for their arms. Other than a couple slip-ups with lines, the second Spanish class did an amazing job telling their story while still making it easy to understand and funny for the audience.

The French and German classes plays were extremely different from the Spanish plays because of the very limited amount of people in each class. The French class did a very good job in presenting their fun rendition of “Scooby Doo,” considering the class had no more than 12 people to help them.

The French IV class did a very fine job in presenting their play with only one big critique, which is that you could barely hear them speak. Despite this, the students did an amazing job in the entire presentation of the play and in making the performance humorous for all languages. Each person had a perfect costume to fit their character, so it was very easy to figure out who was who. The actress playing Scooby Doo wore a Scooby Doo mask that was so big no one could miss it. Overall, the play might not have been the most audible, but it gave everyone a great laugh.

The German IV class consists of only eight people so their rendition of “Hercules” was outstanding with the limited resources and actors. The German III and IV classes are combined into one class period, so over the past two weeks, Antonela Kljijac has had to continue teaching German III class while German IV was on their own writing their own scripts and making their own costumes and props.

Each student played their role brilliantly, especially Michael King with his version of the infamous god of the Underworld, Hades. His enthusiasm for the role really shined through in his performance and was the highlight of the whole play. Hades’ minions were also an excellent part of the performance as they delivered the much needed comic relief in a typically tragic story. While not as elaborate as some of the other plays performed that day, the German IV class was still able to put on an undeniably entertaining performance.