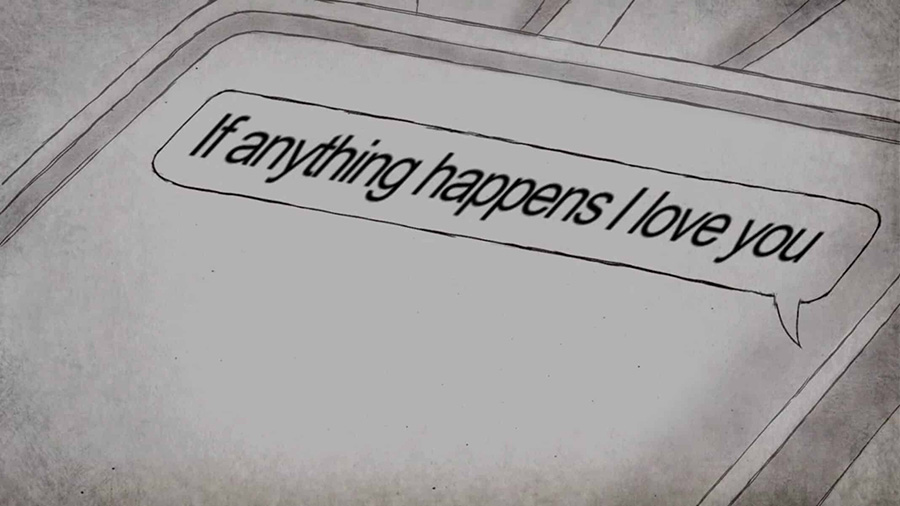 Inspiration for 12-minute short film stems from genuine emotions of parents who lost children to gun violence. “If Anything Happens I Love You” paints an emotional story through two-dimensional animation, gentle music, and wordless grief.

Netflix’s “If Anything Happens I Love You” bears a powerful, heart-breaking message that doesn’t require but 12 minutes to make the watcher’s stomach drop. Truthfully, it only requires a specific 70 seconds.

The film follows two mourning parents whose marriage is falling apart as they deal with the death of their daughter. As they reminisce about their daughter, they are brought together and know that they still have each other, even in the unbelievably hard times. Emphasis on “unbelievable,” because no parents would expect such a fate to be their child’s.

“If Anything Happens I Love You” was directed and written by Will McCormack, who helped write “Toy Story 4,” and Michael Govier. One of the main reasons why this short film has had the impact that it does is because of all of the outside sources that contributed to making this ink-animated, silent, and musically-driven piece of art.

Both directors made the decision to meet with the organization Everytown for Gun Safety and with parents of gun violence victims in order to make the film emotionally realistic. One aspect to this grief that I’ve personally never considered is the effect that the loss of a child can have on the parents’ marriage.

Throughout the film the parents and their ink-drawn shadows yell at one another, showing that tragedy can cause lots of misplaced frustration when such an event is out of one’s control.

Despite the monochrome of the parents’ world, there are traces of color left behind by their daughter. In one scene, the mother sits on her child’s bed, smelling one of her daughter’s shirts, while a soccer ball bumps into a vinyl. The music adds color, while an ink shadow of the daughter is introduced.

This music also catches the father’s attention. He enters the room and joins the mother on the bed. While they’re both still sad, but provide weak smiles, flashbacks begin as they revisit memories of their daughter.

The audience sees her grow up, develop her love for soccer, and have her tenth birthday party. This party was one of the last memories the parents had, before the flashbacks go to the day. The daughter is shown walking to school, her parents having waved goodbye, with her hands on her backpack straps, and with a simple smile.

At this point in the film, the shadow versions of the parents appear in the memory. Even though they are only faceless doodles of black, the emotions of fear and desperation are perfectly drawn. The shadows convey a dire and urgent desire to stop their daughter from going to school, but as she approaches the building the shadows of the parents weep.

There was nothing the parents could have done on that day to know that was going to happen, and it was a matter entirely out of their control. All that there is left to do is weep.

The scene focuses on the monochrome inside of the school, focused but slowly zooming closer on this one room. The film is silent. As the only thing in color on the screen–the American flag above double doors–becomes gradually closer, there’s the sound of popping gun shots, then screams.

The girl’s phone appears on the screen as she sends her final text, holding her last words: “If anything happens I love you.” These words shatter and fall to pieces, while the parents’ world does the same.

The end of this film concludes with the parents on the bed together, with the daughter’s shadow coming between them, whilst uniting them, erupting into color and light.

The film has received mountainous praise, and is continuing to receive more. In one interview with “The Bulletin,” director Govier provides some insight on the driving purpose behind his heart-wrenching art.

“We just always wanted to create (a film) that just talks about grief, and shows what grief really looks like,” Govier said. “And then also within it, to show the resilience of the human spirit.”

This film perfectly fulfills that goal and has touched a lot of people and may possibly be one of the most accurate animations when it comes to painting the emotional colors of grief, in more ways than one.

The bleak colors, of course, paint the way the world appears to those in sorrow–the only things colorful being those that remind them of certain people. The scribble-like drawings also depict the aspects of a person’s life when it feels like it’s falling apart. Whereas the memories, drawn with clean lines, show that life was rightly placed together when their loved one was still with them.

Through the harmony of art, wordless dialogue, and unfortunate reality, Govier and McCormack create a vivid story of the human spirit.

For more information on Everytown for Gun Safety and how you can help, click here.