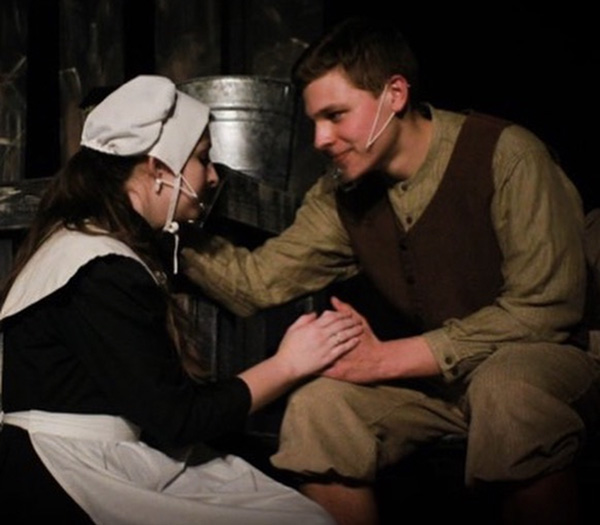 Mr. Nurse, played by sophomore Hayden Andrews, comforts his wife, Mrs. Nurse, played by senior Shelby Witt in their home at the beginning of the play. The Starr’s Mill Drama Department performed this play four times prior to finishing second at the regional competition.

“A Voice in the Dark,” a Salem tale about witchcraft, was an amazing play with exceptional actors and detailed sets. All the scenes in the one act gave me this eerie feeling, like someone was always watching.

There were many scenes that scared me or made me intimidated.

One main scene that gave me this feeling was the church scene. This person in a black hood came out, and the lighting dimmed to a dark blue. This made me excited to see what would happen next.

Some of the lines in the play were carried out beautifully. Goody Rebecca Nurse, one of the main characters played by senior Shelby Witt, delivered her lines with a punch, making the audience scared and worried.

The story starts off introducing the characters that get the most attention in the play, the Nurse family. They get accused of witchcraft by several people in the town thanks to the Putnam family, who is blackmailing the Nurse family.

However, shy and kind Abigail Hobbs, who is close to the Nurse family, overhears the Putnam’s threats toward them and has to choose between staying silent during the trial of the family or speaking up for them.

“As the villain, it is very fun to play a conniving and malicious person who is also poised and has a deep story behind her,” Price said.

Sophomore Matthew Little, who played Mr. Thomas Putnam, gave an excellent performance. The aggression he showed throughout the play was well rehearsed, and I was scared of what he would do next. I especially liked it when he delivered the line “You’re next to pay the price.” It dug down deep and gave me chills. His tone was resentful, yet calm.

In another scene, where Goody Rebecca Nurse was thrown in prison and Goody Ann Putnam went to visit her, their tension the whole time was bone-chilling. They really shocked me, yelling at each other unexpectedly and scaring the audience. I felt like they actually had bad blood with each other outside of the play because it seemed so real. You could tell their characters were so broken and defeated.

The set and lighting were wonderful too, cutting out at the right times and all the transitions blended together well.

This play gave you a feeling like something was off the whole time. My favorite scene was the trial of Goody Rebecca Nurse. There was so much chaos and craziness on the stage.

When Abigail Hobbs, the main character played by junior Kaitlin Minter, stepped up and said her monologue, I was in awe. She had the passion and drive, truly owning the part. Her expressions and voice throughout the whole scene was amazing.

“Theatre is like, ‘Electricity, electricity, sparks inside of me, and I’m free’,” Price quoted from one of her favorite musicals, “Billy Elliot: The Musical.”