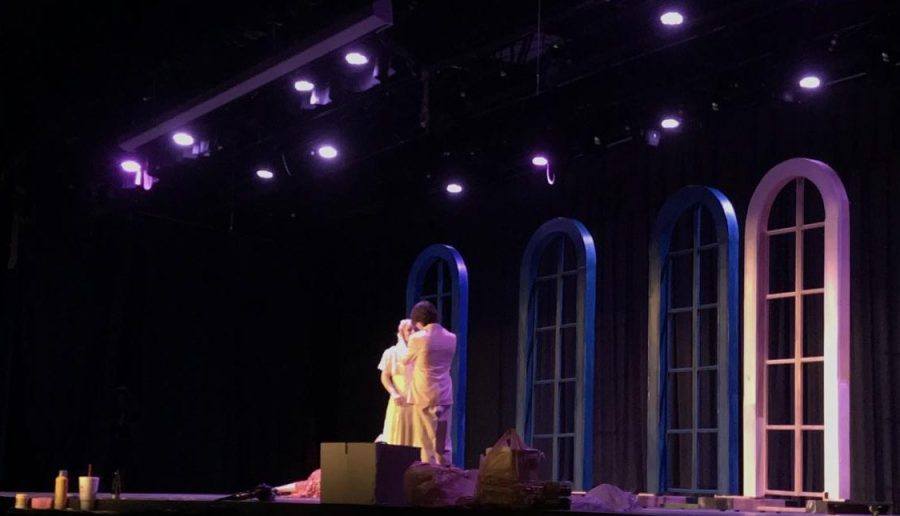 Senior Henry Ravita, playing Jay Gatsby, and junior Alexis Weist, playing Daisy Buchanan, stand on stage. For their yearly One-Act the Starr’s Mill drama department has chosen to perform “The Great Gatsby.” The play will be a retelling of events from F. Scott Fitzgerald’s book, “The Great Gatsby,” and will be performed in the region One-Act competition on October 23.

For the 2021-2022 school year, Starr’s Mill High School presents “The Great Gatsby” live and in person, happily not virtually.

Performances will take place on October 14, 15, 21, and 22 in Duke Auditorium. Tickets are $10 for adults and $5 for children and can be purchased on the Starr’s Mill GoFan page.

The play will consist of a retelling of events from Fitzgerald’s novel “The Great Gatsby,” accompanied by dancing. Published in 1925, “The Great Gatsby” is told from the perspective of Nick Carraway in the 1920s and details his interactions with millionaire Jay Gatsby and many other extravagant characters.

On October 23, the Starr’s Mill drama department will also take this one-act performance to competition to compete against five other schools. The competition will be hosted at Starr’s Mill and groups will perform from 8 a.m. to 8 p.m. in the auditorium.