On the air and live on stage! 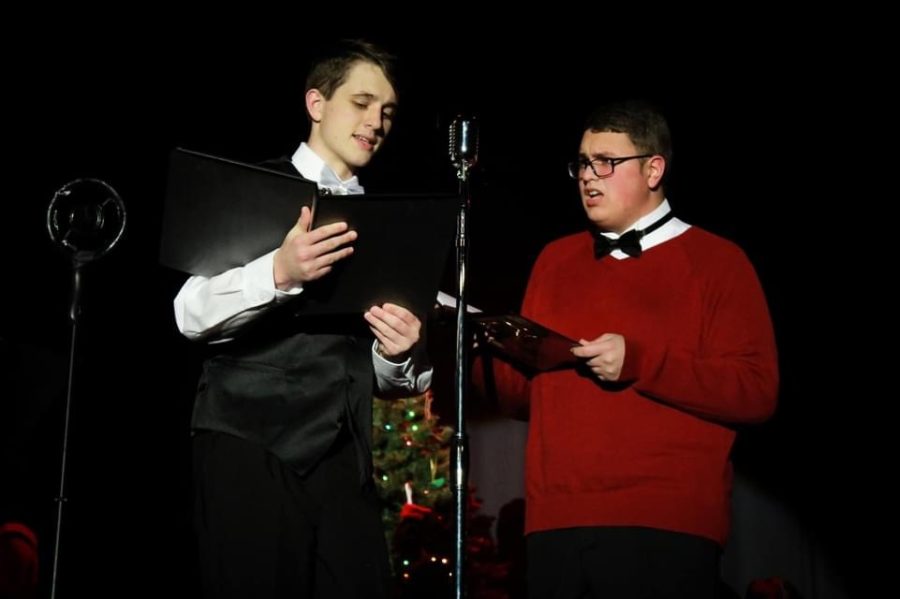 As their Christmas show for the snowy season, the Starr’s Mill drama department presents “It’s A Wonderful Life” both on the air and live on stage.

“We knew from the get go, we wanted it to feel like we were watching real people doing things,” Starr’s Mill drama teacher Lauren Kuykendall said, “especially in those moments before they’re actually reading the radio script.”

The movie “It’s A Wonderful Life” follows the story of a man named George Bailey who lives in the town of Bedford Falls as he navigates the balance of the life of a businessman with the life of a husband. His guardian angel Clarence comes to visit him and shows Bailey what life would be like if he had never existed. Bailey then returns to Bedford Falls with a newfound appreciation for his life.

However, the drama department put a twist into their performance of “It’s A Wonderful Life.” For the first time, the department has introduced the idea of a radio show. The drama students play well-known actors and actresses from the 1940s who are on a radio show, performing “It’s A Wonderful Life,” for all who are listening, as well as the actual audience viewing the show.

“I was worried that the audience wasn’t going to understand what was happening because we aren’t actually acting out the story of ‘It’s A Wonderful Life’,” senior Kaitlin Minter, who played the part of Mary, Bailey’s wife, said. “We are saying it like a radio show would be.”

The show began with junior Aleena Soto acting as stage manager, calling all actors for their 15 minute call. Each actor made their way to the stage and mingled with other actors, as if they were in an actual radio station, complete with a sound effects section and sofas for the actors to sit on.

While the show went on, each actor would walk up to the microphones placed at the edge of the stage to perform a part. Watching the characters perform on stage but also being able to close your eyes and hear the performance like a radio show was a wonderful experience.

“I liked watching them lean into their different characters,” Kuykendall said. “It’s so odd to your eye and your ear because [Isabelle Medders] is dressed in this beautiful dress with flowers and these sequin shoes and plays three different old men, so if you close your eyes you hear all these old men.”

Throughout the show and especially during intermission, he would interact with characters on stage as well as people in the audience, which added a more personal feel to the show.

“I was told that I was allowed to interact with the audience,” Little said. “I’m playing a very, very amplified version of myself, so I’m just going out in the audience and talking to people.”

The unique showing of “It’s A Wonderful Life” lived up to expectations and was an incredible experience for the audience to be able to view the behind-the-scenes of a radio show, as it was being performed on stage.

The Starr’s Mill drama department’s next show will take place in February and will tell the story of Pippin, the son of King Charles who longs to find adventure in his life.