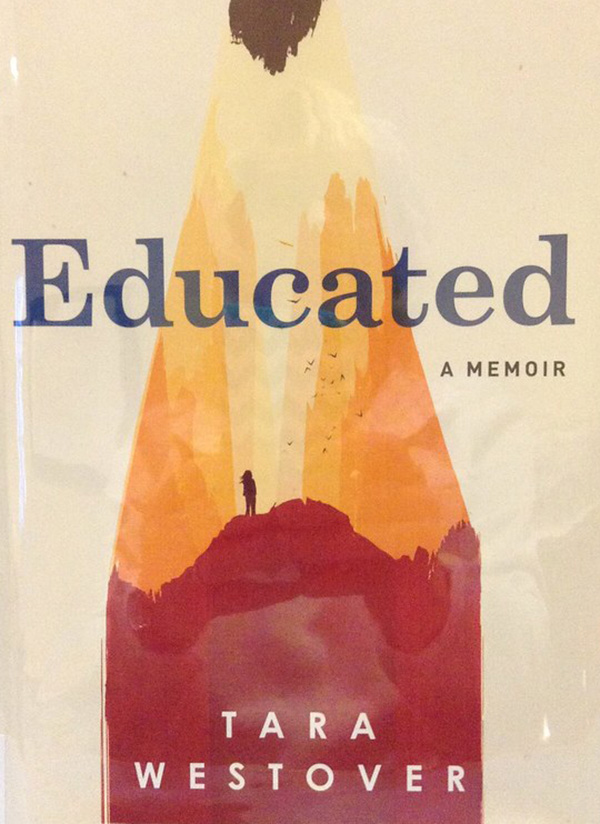 Written by Tara Westover, the memoir “Educated” takes a look at Westover’s life as she navigates through getting a real education and finding her true self. Westover wrote the book as a way to cope with her childhood and the life decisions she made to climb her way up the education ladder.

Following the life of Tara Westover, “Educated” explores Westover’s secluded and unusual life living with survivalists as parents in the mountains of Idaho.

Published in February of 2018, Tara Westover wrote “Educated” as a way to cope with her life and the decisions she made throughout the course of her existence.

The book begins with Westover’s description of her childhood. She grew up in Idaho, secluded from society, along with her survivalist parents. After being mentally abused by her brother, Shawn, throughout her childhood, she managed to get her own education.

Her mother acted as a midwife for the town because it had scarcely any doctoral presence.

Her father, however, spent all day in the junkyard, scrapping metal for money, and stockpiling canned goods and ammunition for the “end of the world.”

Her father’s preparation for the end of the world related to his fear of the government and anything run by the government, which included schools and doctors.

Reading about Westover’s childhood was a shock to me. I had no idea that people lived lives like this, so secluded from society. She explains her life and childhood in detail. “Educated” really opened my eyes to the world and how some families run their households.

After her brother Tyler was the first sibling to leave for college, he encouraged her to study and apply to Brigham Young University. In order to get accepted into a university, Westover had to take the ACT, so she bought textbooks and used old ones to teach herself math, English, and science.

After a few months, she took the ACT once and managed to get a 28, which was a huge feat for her at just 16 years old. She applied to BYU, having her brother fill out the application, and was accepted for their second semester. At 17 years old, Tara Westover set foot in a classroom for the first time.

At BYU, Westover studied psychology, philosophy, politics, and history. When she first arrived, she felt alone and confused in a strange place. She had to navigate the collegiate world of immodest clothing, public transportation, and unfamiliar class content.

In her American history class, she was presented with unfamiliar events that she had never learned before. She was reading an excerpt from a textbook out loud in class and paused on the word “Holocaust.”

Before BYU, she was never taught history, specifically pivotal world events. On her own, she researched the event and was horrified because neither of her parents gave her the education she needed, therefore not preparing her for the unfamiliar curriculum of the classes.

Because she loved Cambridge so much, she applied for a scholarship to get into Trinity College and went there after she graduated BYU in 2008. She visited Harvard in 2010 and eventually returned to Cambridge where she earned her Ph.D. in history.

“Educated” is an inspiring book that shows that even when life throws you obstacles, there is always a way to get through. This book motivates me to go after the things in life I wanted.

“Educated” is a story of family loyalty and an effort to find one’s true identity. Westover navigates through the fresh and unfamiliar world as she strives for education and self-invention while struggling with severing family relationships.