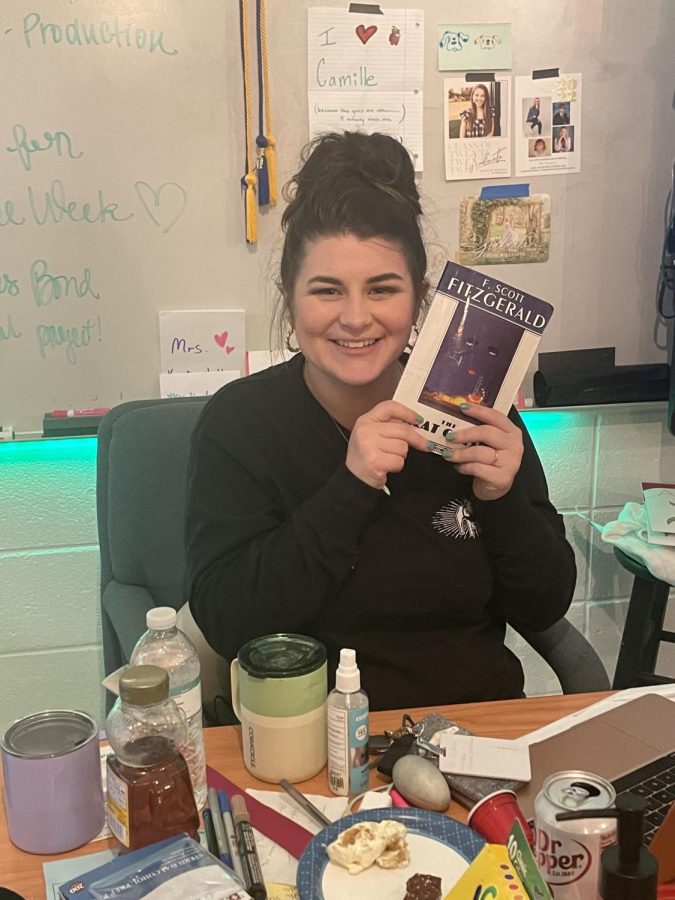 Drama teacher Lauren Kuykendall enjoys the book “The Great Gatsby” by F. Scott Fitzgerald. The book follows the story of Nick Carraway as he discovers the life of the wealthy is not as glamorous as it seems.

“This was the first book that I read that was not a young adult novel or something kiddy-related,” Kuykendall said. ”It holds a special place in my heart.”

“The Great Gatsby” is inspired by a youthful romance Fitzgerald had with a socialite, and the riotous parties he attended in Long Island’s North Shore in 1922. Although Fitzgerald was satisfied with the text after publication, he found complications around what he would name the novel, and went through a series of alternatives.

“It’s considered to be the American novel, “Kuykendall said.  “Nick Carraway reconnects with his distant cousin and her wealthy husband and quickly learns that the lifestyle these people lead is not as glamorous as he thought.”

“The Great Gatsby” follows Carraway, who gets into cahoots with his neighbor Jay Gatsby as he introduces him to the not so lovely lifestyle of the wealthy. After much drama, Carraway realizes that Gatsby’s dream was corrupted by wealth and dishonesty, and the American Dream of happiness and individualism has been destroyed by the pursuit of wealth.

Scott Fitzgerald was born on September 24, 1896, into a middle class family in Minnesota. He was raised primarily in New York, and he attended Princeton University where he befriended future literary critic Edmund Wilson. Fitzgerald frequented Europe as he grew older, and he became acquainted with many literary novelists during the release of his third novel. Following the deterioration of his wife’s mental and physical health, he completed his last novel, “Tender is the Night,” in 1934.

“The Great Gatsby” is an entertaining, lively book, with many twists and turns as the story continues. If you need a good book to read, look no further because this one is sure to keep you engaged.