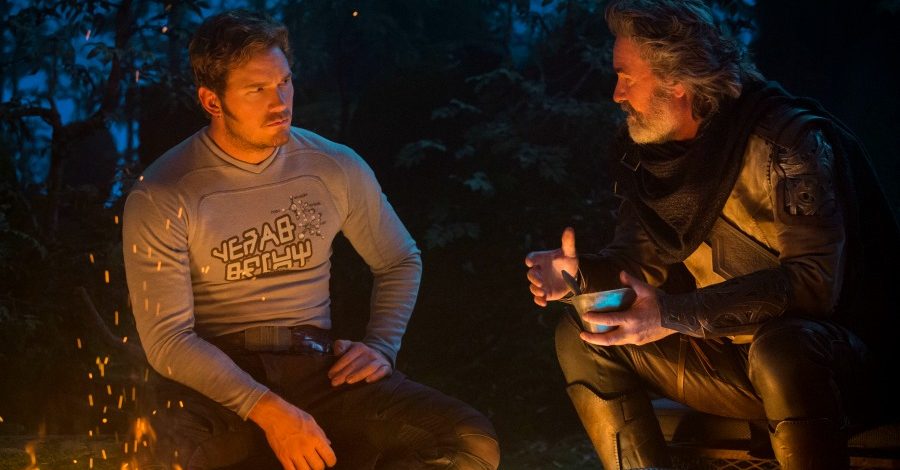 Peter Quill (Chris Pratt) and his father, Ego (Kurt Russell), meet for the first time next to the guardians’ broken down ship. Quill’s skeptical attitude toward Ego plays a key role in the plot of this film and adds to the mysterious unknown nature of the movie series.

After the extraordinary adventures of the “Guardians of the Galaxy” in 2014, audiences everywhere craved a sequel that followed the original Marvel comics. It seemed only fair to continue the films, as there are many unanswered questions toward the end of the first movie that could only be answered with a sequel film. What some people are calling the film that has broken Marvel’s unsuccessful movie series streak, “Guardians of the Galaxy Vol. 2” is an incredibly hilarious continuation, guaranteed to exceed audience expectations.

Just like the first film, Peter Quill (Chris Pratt), or rather, Star-Lord, endures every challenge listening to the mixtapes given to him by his mother, this time around emphasizing on “Mixtape Vol. 2.” The movie begins with all five guardians established at the end of the last movie, Gamora (Zoe Saldana), Drax (Dave Bautista), Rocket (Bradley Cooper), Groot (Vin Diesel), and Star-Lord all fighting to keep the galaxy safe.

At the end of the original “Guardians of the Galaxy,” Groot risks his life to save the rest of the guardians from an explosion, resulting in his death and the emergence of a baby Groot. Throughout this film, Groot is exponentially smaller than his original character, making it simple for him to fit into small places to help the guardians save the galaxy.

The crew was hired by the Sovereign Race, who inhabit the Sovereign planet. Their leader, Ayesha, appoints the guardians to protect the precious Anulax batteries and fight an intergalactic monster in exchange for Gamora’s demented sister, Nebula (Karen Gillan), who was caught trying to steal them. The feud established between Gamora and Nebula continues on in this film through Nebula’s hatred toward Gamora from childhood.  After killing the monster, the team flees along with Nebula only to find out Rocket had stolen the batteries. Soon, a fleet of the Golden Drones follow behind the guardians’ ship and begin to attack with the intent to kill.

When the guardians have to make an emergency landing on an empty planet due to damage caused by the attacking drones, a mysterious spaceship demolishes every single attacker in the sky. When the team lands, Quill is greeted by a celestial being that claims to be his father. Ego (Kurt Russell) takes Quill, Gamora, and Drax to his beautiful planet created by himself while Rocket stays behind, fixing the ship and watching Nebula and Groot.

Of course, like the first movie, things don’t go exactly as planned. The Sovereign planet contacts the Ravagers (the thieves of outer space) and gives them the ship coordinates to find and kill the Guardians of the Galaxy. Led by well-known “adoptive” father of Star-Lord, Yondu (Michael Rooker), soon opposes killing the guardians because of Quill. This is different from the first movie when Yondu and Quill are enemies due to Quill tricking Yondu and not giving him the orb. The rest of the Ravagers, led by Taserface (Chris Sullivan), overthrow Yondu because of the million ‘unit’ reward to be given by the Sovereign people. The Ravagers take Yondu, Rocket, Groot, and Nebula as prisoners.

Meanwhile Quill, Gamora, and Drax get to know Quill’s father, Ego, a little better. After meeting his pet from a different planet, Mantis (Pom Klementieff), who helps Ego sleep at night due to her power to influence emotions, Gamora begins to sense something is terribly wrong with Ego on his planet that seemed to be lingering with secrets.

Rocket, Yondu, Groot, and Nebula eventually find their way to Ego’s planet with the help of Yondu’s signature bionic mind-controlling fin and arrow to help save the day. The audience’s view of Ego suddenly changes and the father that Quill desperately longed for, especially after his mother’s death, is no longer the person he thought he was.

This exciting and action-packed new sequel surpasses what was expected from audiences after the first film. It seems to be filled with even more laugh-out-loud moments than the original. While “Guardians of the Galaxy” set the basis for a future movie series, it was mostly spent building up characters rather than a ground-breaking adventure plot.

In “Guardians of the Galaxy Vol. 2,” however, the film is constantly filled with adventure and conflict, making it hard to lose interest while watching. Even when things seem to be getting somewhat boring, comedic relief is implemented and will leave the entire theater in an uproar of laughter.

The CGI used in this film is just as impressive as the last, effectively convincing audiences of the intergalactic horrors that lie within the universe. Many realistic looking moments can easily make people jump out of their seats, both in shock as well as in spurts of laughter.

While the sequel film is rated PG-13 for language and violence, this adds to the feeling of complete anarchy that exists in this adaptation of outer space. Yondu’s use of the fin and Rocket’s gadgets used to fight off criminals adds to the satisfying feeling of rooting for the good guys.

Each individual scene throughout the movie feels extremely crucial to the plot of the story and ventures away from what was expected by those who lack the insight from the original comics. The storyline is well thought out and assists in adding more premise to the guardians’ story.

“Guardians of the Galaxy Vol. 2” truly does not disappoint the film’s primary audience. It is filled to the brim with amusing moments as well as few tear-jerking scenes. It makes for an incredible sequel to the first film and leaves audiences waiting in anticipation for the next volume.