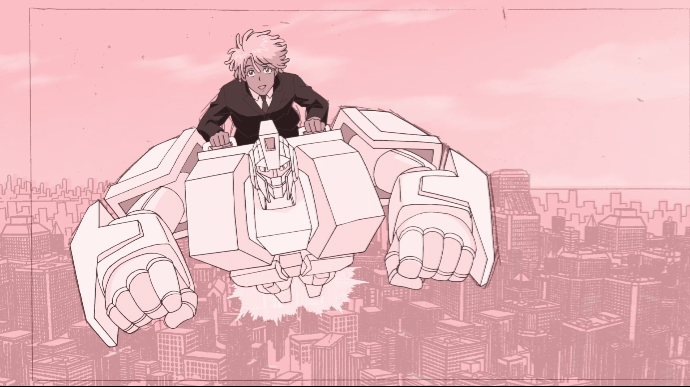 Neo Yokio’s most eligible bachelor and demon-slayer Kaz Kaan (Jaden Smith) takes a ride through the city on his mecha-butler, Charles (Jude Law). Despite coming in a neat package, “Neo Yokio” lacks the substance to make a strong first impression.

Netflix’s newest concoction seems promising, but looks can be deceiving.

Created by Ezra Koenig, the lead singer of the indie rock band Vampire Weekend, the new anime series “Neo Yokio” makes an auspicious impression with an original premise and cutting edge design. Koenig’s freshness to the television business, the endless creative freedom of Netflix’s platform, and the whimsical aesthetic of the promotional materials are all encouraging, and with six twenty-minute episodes, “Neo Yokio” is perfect for a bit of weekend binge-watching. In some ways, the show follows through, and in others it falls heartbreakingly short.

The American-Japanese co-produced anime series re-imagines New York as Neo Yokio, a futuristic cesspool of status and luxury, racked not only by West Side/East Side social squabbles, but by vicious, Marx-loving demons. Many years ago, the rich and powerful of the city enlisted backwater, pink-haired exorcists to combat against these dark forces; this group later evolved into the “magistocracy.” Our hero, the glamorous Kaz Kaan (Jaden Smith), is one of these magistocrats, despite being more interested in the newest line from Dolce and Gabbana than his demon-slaying duties.

One noteworthy success is Neo Yokio as a visual medium. Every moment of each episode is expertly constructed, from the pearly pink intro sequence to stunningly crisp animation of events and places like the The Sea Beneath 14th Street, the Kaan family’s penthouse graveyard, and the Neo Yokio Grand Prix. Characters like fashion blogger and socialite Helena Saint Tesero (Tavi Gevinson), Kaz’s friends Lexy (The Kid Mero) and Gottlieb (Desus Nice), and Kaz’s Aunt Agatha (Susan Sarandon) are all fun to watch, but it becomes apparent at about the third or fourth episode that these characters just sit there, not changing or interacting with the story in any meaningful way.

No matter how many celebrity voices are employed — Jude Law and Steve Buscemi are among them, and admittedly, it’s hard not to enjoy their appearances — or how many cute one-liners Jaden Smith rattles off, it’s very difficult to make up for the lack of depth in “Neo Yokio” with pomp or idiosyncrasy. This is due to quite a few fundamental errors in thematic clarity.

The world of “Neo Yokio” is a labyrinth of context and allusion. The parallels of characters and plotlines within popular culture are endless. But while this might be alluring initially to a viewer, it becomes clear that the show doesn’t want to actually provide a coherent moral lesson, but just hint and wink, which serves to shatter all the work done upfront to craft the world and characters of “Neo Yokio.”

The closest way the show gets to a message is through the character of Helena Saint Tesero. Early on in the series, she is possessed by a demon, only to be exorcised by Kaz Kaan. The two begin to rekindle their relationship, but Kaz finds Helena has changed since her possession, in that she no longer believed in the ceremony of Neo Yokio life, nor in her previous occupation in something as frivolous as fashion. She professes this openly, giving textbook explanations of the evils of capitalism and the elite. But it feels fake — the story’s arc hardly ever follows this idea, and when it does, it does it so subtly that it’s lost on most viewers. Even despite the final episode of the series being entitled “I’m Starting to Think Neo Yokio’s Not the Greatest City in the World,” the show never gets anywhere near a moral resolution, as if it’s still a work in progress, still a bunch of ideas being thrown around a writers’ room. It doesn’t feel like “Neo Yokio” has reached the core or meaning of anything, and that’s something that television needs to do, even over the course of a season.

This is especially problematic because viewers are left wondering, and not in a good way. Is “Neo Yokio” mocking Helena’s sentiments or celebrating them? Is she unfit to critique the society of Neo Yokio because of her status as an aristocrat? Is Koenig going so far as to satirize all members of the New York elite, both those who try desperately detach themselves from it and those who remain firmly planted within its hierarchy? In the best case scenario, “Neo Yokio” aimed to stir up these sort of questions.

In the worst case scenario, the series uses buzzwords to attract an increasingly left-leaning youth without giving any sort of context. Lines about “The Metropolitan Museum of art being painted red with the blood of the bourgeoisie” and “being done searching for meaning in the aesthetic cycle of commodities” are all witty and fun, but there are consequences to carelessness moral performance. Layering art with five thousand different ideological lenses and ideas just because it’s trendy only succeeds in further leading our generation astray. It perpetuates the idea that saying and not doing — the stance of many prominent “liberals,” many of whom no doubt reside in the very city “Neo Yokio” seeks to parody — is a valid form of political participation. It blurs even more the line between fashion and activism, until neither have any meaning.

Maybe Koenig meant to comment on exactly what’s being described, but the audience will never really know, because none of the messages in the series were confronted with any level of precision. Ambiguity is not a crime in art, but at the point where “Neo Yokio” wasn’t particularly compelling in its plot, some sort of decipherable meaning would have been preferable. While a scathing ethical review of “Neo Yokio is probably possible, the immediate consequence is perhaps a bit less alarmist. This thematic wishy-washiness simply doesn’t make for an enjoyable story.

All that being said, “Neo Yokio” is probably worth a watch. Many enjoyed the one-liners about blessing the memory of Coco Chanel, and it’s not always necessary to examine media in terms of moral minutiae. It’s a must-see for lovers of animation, as the series has arguably produced what could be emerging trends in the genre.

Is “Neo Yokio” full of avant garde brilliance and relevant political commentary, or does the series get too caught up in the utopia it created?