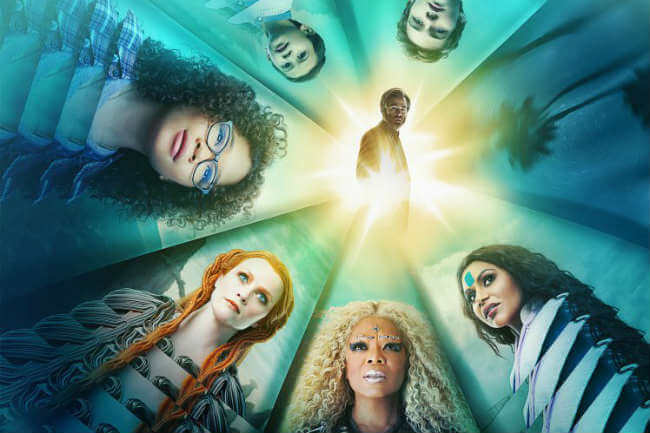 Released on March 9, 2018, Ava Duvernay’s movie “A Wrinkle in Time” is a visually stunning interpretation of its book counterpart. Both the book and the movie consider the idea of instantaneous space travel, hope, and the darkness within us all.

Dr. Alex Murray has been researching this possibility with his wife for years. That is, until he disappears. It’s been four years and his daughter, Meg, is losing hope of him ever returning. With the help of Mrs. Who, Mrs. Whatsit, and Mrs. Which, Meg, her brother Charles Wallace, and their new friend Calvin, go on the adventure of a lifetime to get Alex Murray home.

Ava Duvernay’s reboot of the Newberry Award winning classic “A Wrinkle in Time” is an amazing and fantastical interpretation. It is visually stunning, sucking viewers into an amazing world. The CGI is so well done that it truly feels real. When placed side by side with Disney’s 2003 version, the older version just doesn’t compare. Technology has come extremely far since then and the movie shows it off extremely well. It does a great job in bringing the characters and settings to life.

The movie is also well done in the sense that it sticks to the book very well. For the sake of storytelling in a shorter period of time, some small details are left out or changed, but otherwise it is very accurate. Duvernay clearly paid attention to the book and did her best to give it justice. Some character descriptions do not match Madeleine L’engle’s original descriptions, but it makes for a more diverse and entertaining cast that suits the time in which it was made.

Despite these good qualities, the movie doesn’t seem to be getting very good reviews . This may be because Director Ava Duvernay made the worlds seem too magical. The story is all about darkness in and around all of us, but the movie doesn’t convey this message very well. The bright colors and beautiful scenery that make it visually engaging is also what disappoints fans of the book.

Back in 2003, Disney attempted to make a movie adaptation of the L’engle’s book, but it didn’t seem to work out very well. It is very clear that the movie was made in time where the technology wasn’t nearly good as it is now, but honestly they could have done a better job.

I would go so far as to say that the original Star Wars from more than twenty years earlier did a better job than Disney did with “A Wrinkle in Time.” Just as with the reboot, it did stick to the book fairly well, but clearly took some parts out for the sake of time. However, the 2018 version did a better job of putting it all together as it came out quite choppy in 2003.

On many levels, it is just as good of an interpretation of the book as the 2018 version, but the better visuals in the reboot make it much more enjoyable to watch.

The book is almost always better than the movie, and this stands true in with “A Wrinkle in Time” for both movie adaptations. What makes the book truly magical is that a lot of it is left up to the imagination, allowing for many different interpretations from different people. This is just something that cannot be captured on screen.

The book is also much more dark than either of the movies and it’s supposed to be. The book is meant to be chilling and acts almost as a warning to the readers. This is just something that both movies fall short on.

If you really want the full experience of L’engle’s classic tale, the book is more than worth a read. However, Ava Duvernay’s new movie is beautiful and entertaining. Avid fans of the books may not be pleased with how it turned out, but as a movie alone it is absolutely beautiful.