How to perfect your trilogy 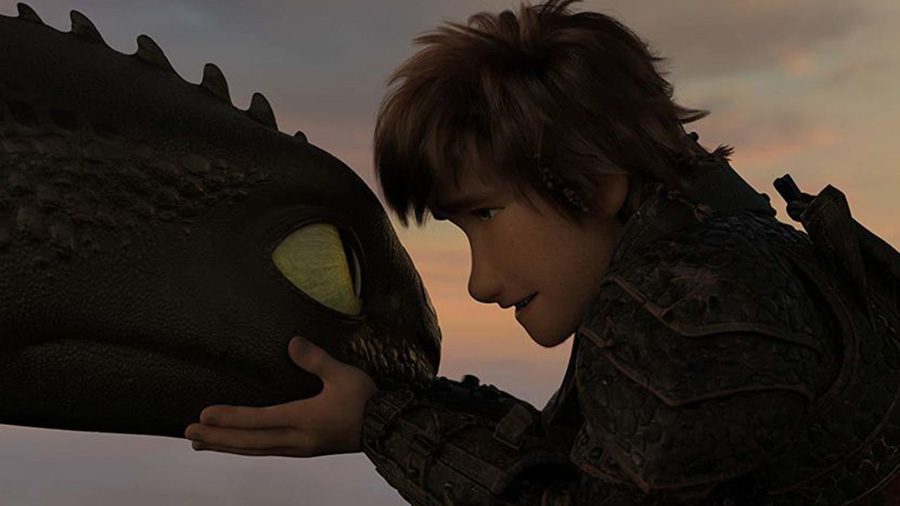 Viking Chief Hiccup and his trusty dragon Toothless share an emotional moment in Dreamworks Animation’s “How to Train Your Dragon: The Hidden World.” This last installment in the franchise concluded Hiccup and Toothless’s story with a fulfilling and heart-wrenching ending.

The story that began with a little boy who couldn’t kill a dragon ends here, a lifetime and three movies later. Welcome to “How to Train Your Dragon: The Hidden World,” the perfect ending to a magnificent saga.

“The Hidden World” finishes off the “How to Train Your Dragon” trilogy in explosive, fantastical fashion, maintaining the momentum and overall quality of this adorable viking/dragon series right until the end. As Hiccup, his viking family, and their dragons face a new threat, they are driven from their home on Berk into a rollicking adventure in the search for the Hidden World, a secret dragon homeland.

As with the two previous movies in this series, “The Hidden World” was an absolute blast from start to finish. This movie features all of the same great qualities of its predecessors: hilarious characters, engaging action, visually astonishing animation, and the most lovable on-screen friendship a boy and his Nightfury will ever have. By finishing the trilogy here, with this spectacular installment, I can safely conclude Dreamworks has achieved trilogy perfection, or something close to it.

The entire “How to Train Your Dragon” saga has excelled with its continuity from movie to movie, not just in plot, but in character development, running jokes, and in-world details. Toothless’ inability to draw, for example, is one of many little gags that repeats each time, giving fans a nice callback to the other films while further enforcing that this trilogy can be thought of as one continuous movie. Eagle-eyed viewers will also notice a plethora of tiny details and minuscule easter eggs within “The Hidden World” that make it clear the series was made with dedication.

Another similarity from movie to movie is that Hiccup and Toothless’ friendship is always the primary focus of the story. In “The Hidden World,” the major plot elements are a ruthless dragon hunter pursuing Toothless, a female Nightfury (dubbed a “Lightfury”) who Toothless falls head over wings for, and the search for the Hidden World. But all of these things are only as important as their impact on the central friendship to the series. Between Hiccup’s duties as Viking chief, the new threat, and Toothless’ dragon girlfriend, the end of that friendship is a real possibility.

Naturally, beyond the drama, this kid-friendly flick is packed with childish humor. Comic relief comes from all directions, even at times from the leading villain. The humor is clever and appropriate for young audiences, but there are still those few great jokes that teenagers and adults will appreciate more than kids, making this a great watch for all ages.

After three movies, the “How to Train Your Dragon” universe has as many supporting characters as it has dragons. In this movie, Hiccup, his girlfriend Astrid, and Toothless experience the most dramatic character development, with everyone else settling into their static positions in the narrative.

Hiccup’s mom adopts the role of the wise mentor, Gobber acts as a substitute father figure, and the other young characters offer heaps of hilarity throughout. Of the many whimsical sidekicks, the best in this installment are Tuffnut, whose bad advice to Hiccup is borderline meta, and Snotlout, whose obsession with Hiccup’s mom balances precariously between hilarious and disturbing.

The action scenes of “The Hidden World” are explosive, exhilarating, brutally cool, and still PG-rated. Combat takes place on land, air, and sea, on the backs of dragons or on great Viking warships. Always maintaining creativity, this movie introduces new weapons and dragons that create brand-new opportunities for engaging action.

With CGI technology on a constant upward climb, “The Hidden World” is a visual spectacle. The microscopic details in the animation creates one of the most realistic animated movie experiences ever. This movie also contains a wide range of color palettes across the story, in a variety of different locations. Whether the setting is the open ocean, the rocky cliffs of Berk, the fluorescent Hidden World, or an explosive naval battle at sundown, this movie always looks fantastic.

The continuity, characters, comedy, action, and animation alone make this movie an entertaining spring blockbuster, but the closing scene to the movie (and in effect, the franchise) was so downright wonderful that the entire movie’s status is elevated by it. It’s something best seen after having watched the entire series, and once you’ve seen it all, it’s a powerful and uplifting experience to witness. The finale of “The Hidden World” is a timely and fulfilling conclusion that brought this trilogy to a perfect end, and I couldn’t be more pleased.

Binge the first two films if you haven’t already, and take off to the theater to witness this fiery finale. It’s a work of art worth seeing.