Shock through the heart 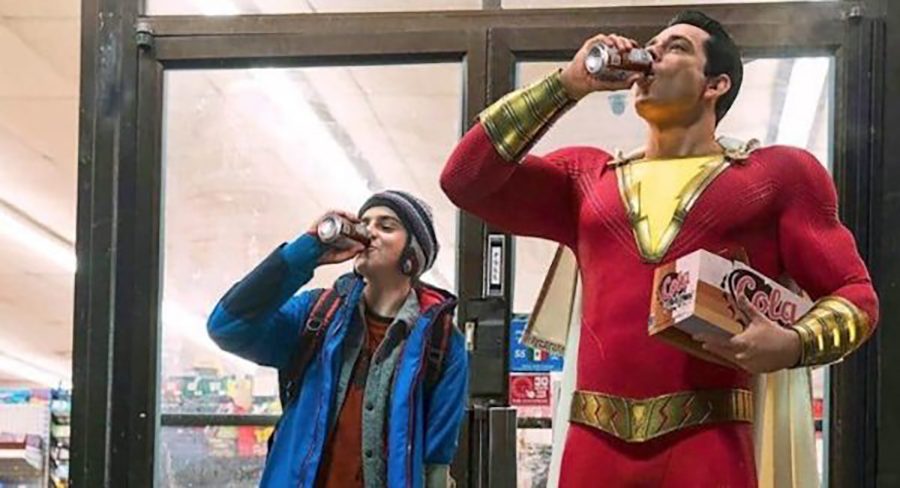 Shazam! and Freddy take a swig of cola together in DC Universe’s newest movie. The film is full of action, humor, and heart that anyone can enjoy.

“Say my name so that my powers may flow through you.” That’s how the adventure begins for Billy Batson (Asher Angel), foster kid and occasional runaway turned superhero in an adult body.

In the newest DC film “Shazam!,” Billy has just run away from yet another foster home in search of his absent mother and has landed himself in a group home with several different foster kids including his new roomie, Freddy Freeman.

Freddy (Jack Dylan Grazer) is a self-proclaimed expert on superheroes and he proves himself the perfect sidekick for Billy’s alternate identity, Shazam! (Zachary Levi). Together, they will test the limits of Shazam!’s powers and prepare for the final fight that he was made for.

The family dynamic that is built up in Billy’s foster home is agonizingly adorable. Every single one of the kids is cute, funny, or unique in some way that just warms your heart. They’re a rag-tag bunch, but they prove themselves to be family.

All the foster kids are pulled together by their lovely foster parents. Although Freddy makes a joke about them early on, it is clear that Rose and Victor Vasquez (played by Marta Milans and Cooper Andrews respectively) are the coolest foster parents ever.

The movie has plenty of humor and heart that make it the perfect family superhero movie. A fourteen-year-old boy in a grown man’s body is sure to cause some hilarious scenarios. This includes posting selfies in the park, public displays of his powers and downright childish moves. They’re sure to create a laugh but also border on cringey for the more mature audience member. That being said, Billy, Freddy, and even the villain Doctor Sivana (Mark Strong) have some hilarious quips to counter some of the more serious parts of the movie.

The movie also has several inconsistencies that make the storyline somewhat confusing. The powers of the villains and the maturity of Billy Batson seem to waver depending on what the writers felt like doing for a particular scene. These inconsistencies can prove frustrating because they change the outcome of the story. The final fight may have ended differently had these inconsistencies been addressed.

The acting of all the characters is also something that can make or break a movie. For “Shazam!,” it did neither. None of the actors were completely horrible. Angel, Grazer, and the rest of the young cast depicted their characters well, but by the same token, none of them stood out either. Even the adult actors were mediocre. Levi was fairly good at embracing his inner child for the role, yet just like the rest of the cast, his acting is nothing to scream about.

Despite these flaws, “Shazam!” is an action-packed and heartfelt movie for the whole family. While it certainly doesn’t live up to the likes of “Wonder Woman,” it is an enjoyable movie for just about anyone.

“Shazam!” might not win any movie of the year awards, but its certainly worth watching if you just want to have a good time.