‘Terminator: Dark Fate’ fails to escape the shadows of the first two films 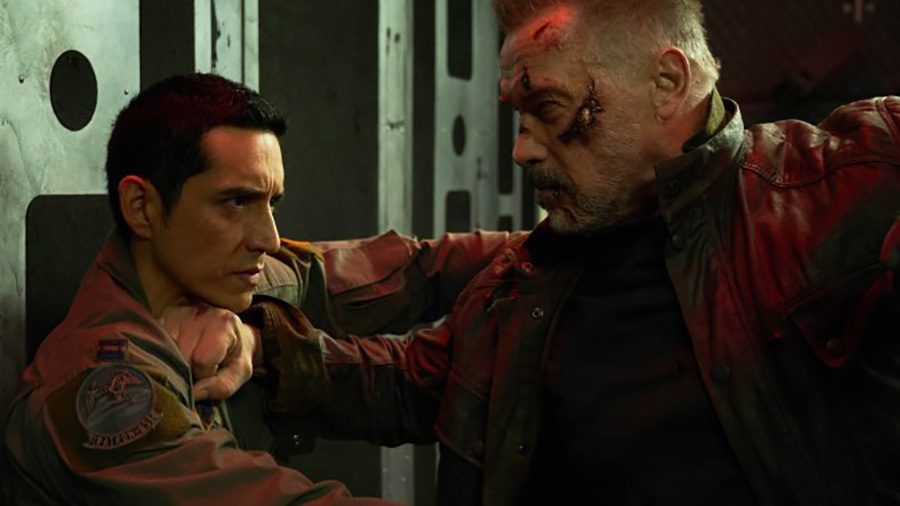 The NEV-9, Gabriel Luna, locked in combat with the T-800, Arnold Schwarzenegger. “Terminator: Dark Fate” borrows a little too much from the movies that preceded it. Despite this, it is still an alright movie.

The Terminator franchise has had a difficult journey up to this point. Many people believe the franchise peaked with “Terminator 2: Judgement Day,” and I am guilty of agreeing.

When producer James Cameron left the Terminator franchise, Hollywood dragged the franchise down into obscurity, so “Terminator: Dark Fate, ” also known as Dark Fate, was an opportunity to right the wrongs of the previous three films.

James Cameron returned as well as Arnold Schwarzenegger and Linda Hamilton to reprise their roles as the T-800 and Sarah Connor. Their contributions have resulted in a solid reboot for the franchise.

The story of Dark Fate is akin to the first two films. A terminator known as NEV-9, Gabriel Luna, is on a mission to terminate Danielle “Dani” Ramos, Natalia Reyes, due to her influence on a human rebellion against machines in a future where machines have taken over.

Saving her is an augmented human named Grace, Mackenzie Davis, who was sent from the future. Along the way, they run into an old Sarah Connor. Connor has now committed her life to hunting and destroying terminators after the death of a main character character.

This is the first problem I have with this movie. They kill off a fan-favorite character less than two minutes into the movie. I get the idea, Cameron did this most likely to hit the reset button on all the movies after T2.

However, that decision alienates big fans of the series who loved the character in previous movies. This movie is supposed to be about the timeline where Skynet, the network responsible for the rise of the machines, was destroyed so the future talked about in the first two Terminators never happened. I respect the idea, but I see this as a disrespect to fans at the same time.

Despite losing a fan favorite, the cast was still fairly enjoyable to watch. Reyes immersed herself in her role to great effect, and Davis’ role is solid as well by portraying her role of somebody trying to protect the future.

Luna was tremendous as a terminator. In the moments where he is supposed to be completely set on terminating Dani, he was phenomenal looking like a machine on a mission. It is not right to compare him to Schwarzenegger’s terminator, but Luna still does an amazing as the NEV-9.

Linda Hamilton’s performance is probably the best in the film. This may also attribute to how I think that Connor, being written with a lot of dark humor fits her character. She tapped into the emotions of the character when it was necessary, though in every other moment Hamilton is a joy because of how funny some of her lines are.

With Arnold Schwarzenegger back as the T-800, he once again fits his role perfectly. T-800’s character is all about being a family man now that terminating his target made him a machine without purpose. His character isn’t supposed to have human emotion, but the fact that some of his lines are very well written, his words can still make an emotional impact.

Visually “Terminator: Dark Fate” looks absolutely extraordinary. It has a lot of polish, the CGI looks incredible, and every action scene actively makes the viewer not want to look away. My only complaint is that there are some points where slow motion is just a little bit misused.

When the action stops for a moment, the movie fills those gaps in with characters talking about the future. In the moments where Dani’s character is able to get more involved, her arc has its journey. It works for Dani because it helps her get comfortable with the life or death situation that she is in.

Both in and out of action scenes, there are a lot of cool ideas that are utilized with the NEV-9. His main gimmick is a liquid human-like body with a machine endoskeleton underneath. This led to many unique action scenes that made them much more interesting. However, the action does not make a movie, the writing does.

The one major problem with the writing in “Terminator: Dark Fate,” it is repeating the themes and ideas that “Terminator 2: Judgement Day” had. These two films have similar ideas of hanging fate and taking it into your hands, though T2 actually tells those ideas better.

When you look back at the people that came to work on this movie, it makes the film disappointing. Dark Fate is too afraid to go out on a limb and tell a unique story, but that does not mean the film is not still a solid movie to watch.

The legacy of The Terminator franchise will never be what it could have been. “Terminator: Dark Fate” is good enough to give us an alright farewell to the franchise. The acting was great, the writing was solid, and the visuals were phenomenal. However, fans will always be curious of what the movie could have been.