Time, space, and a whole lot of questions 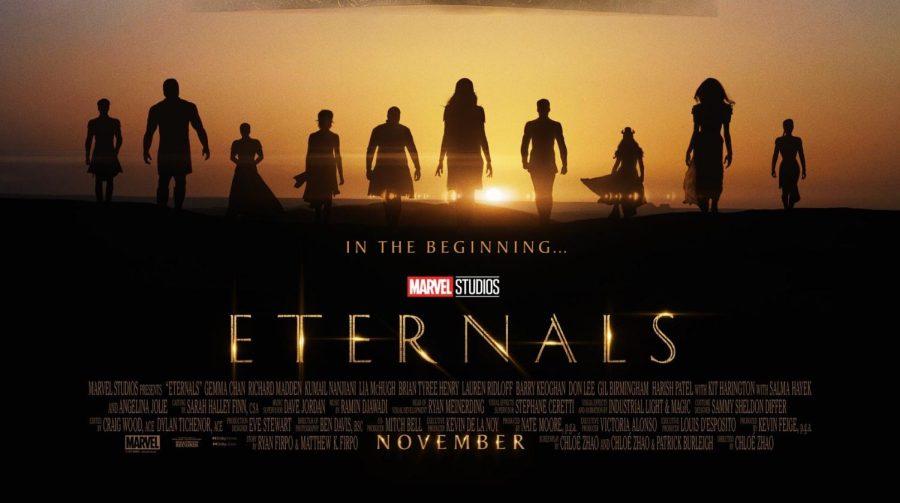 Movie release poster for “Eternals.” Along with stunning visuals from director and Academy Award winner Chloé Zhao and an incredibly diverse cast, Marvel’s “Eternals” gives fans a new revelation on the effect of streaming shows and whether or not they hinder an audiences’ ability to sit down and watch a movie.

Marvel has done it again. With their recent release of “Eternals,” Marvel studios has left fans with more questions than answers, including a new one related to the lasting impact of their summer series.

Aside from “Shang-Chi and the Legend of the Ten Rings,” “Eternals” is the first real Marvel film that fans have had since the recent influx of streaming shows over the summer. However, since then, they have also introduced a multitude of concepts, like the multiverse, time, and the countless number of secret underground organizations.

Although it is to be expected for any two-and-a-half-hour-long movie, I just could not sit still. In “Eternals,” Marvel tried to fit a brand-new concept for Phase Four, one that deals with the creation of space and whether or not space came before time. It felt like a lot of information in such a short amount of time.

Has the recent influx of Disney+ streaming shows, that tend to stretch out over two months, ruined the effect of sitting through a movie in the theater? There is a huge difference between shows and movies, especially when thinking about Marvel.

In their recent shows like “Loki,” and “Wandavision,” they were able to fit a lot more content and successfully develop those stories over time without shoving it all at once in audiences faces. In movies, directors have to fit a certain amount of content in only two hours or so, meaning the stories are unable to be well-developed as compared to a TV show.

Now that fans have gotten attached to the idea of TV shows spanning over a period of a few weeks, meaning greater access to well-developed content and characters, what does it mean for the future of Marvel? Despite the amount of information given in such a short amount of time, Marvel did not butcher the delivery of said concept.

Marvel gave time to set up a backstory for the Eternals and how they played a part in history. The backstory was given more time than normal but it was craftily done through flashbacks. They also gave plenty of time to show the Eternals defeating the “bad guy” and saving the world, much like most Marvel movies.

However, “Eternals” had more than just that. Marvel used “Eternals” to introduce a brand new concept of “Who actually controls who?” in the Marvel universe, leaving fans asking, “Which came first, space or time?” and “Who created who in the Marvel cinematic universe?”

It seems as though Marvel will most likely need another movie to answer these questions, or at least use the next few Phase Four movies to do so.

Directed by the critically acclaimed Academy Award winner and filmmaker Chloé Zhao, “Eternals” has one of the most stunning visuals in Marvel history. Each and every scene has its own visuals to correctly display the time periods.

Each character had their own personalized costume that brought in a way for audiences to recognize them just by color. For instance, Sersi, played by Gemma Chan, donned the color green whereas Thena, played by Angelina Jolie, wore the color white. These costumes managed to stand out so well and brought in more color and recognition to the movie.

The cast as a whole was one of the most diverse casts Marvel has offered. With Gemma Chan as the first woman of color to be a leading lady in any Marvel movie, as well as the addition of the first deaf character, Lauren Ridloff playing Makkari, and the first openly gay character, Brian Tyree Henry playing Phastos, “Eternals” had much more to offer than just visuals.

Despite the number of questions that fans left with, “Eternals” was an incredible film with its stunning visuals and inclusive casting.

Fans are also left with the brand-new revelation of whether or not the effects of streaming shows, especially by Marvel, have hindered an audience’s ability to actually sit down and watch a movie.

More creative storytelling will be needed in Marvel’s future to keep audiences engaged and answer these lingering questions.