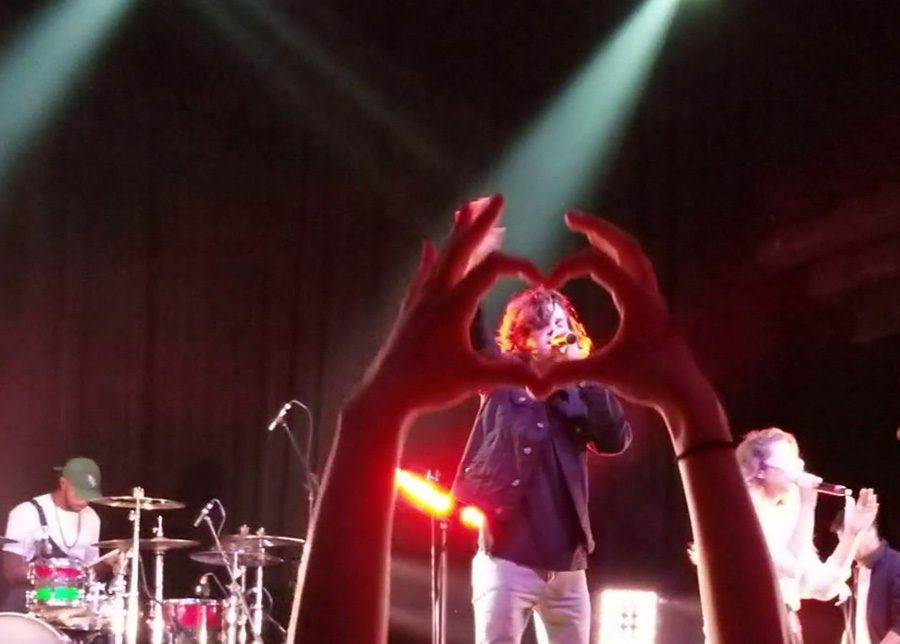 Fans show love for rapper George Watsky at his Atlanta show on the “Welcome to the Family” tour. Following this tour, Watsky released “Complaint,” a wonderful new album that’s stuffed with his lovably outlandish style.

Slam poet George Watsky first released music in 2009 with his self-titled album, a collection of songs that combine fast rap, meaningful lyrics, and a heaping dose of weirdness. Since then, he has released five total albums, and each one carries on the same Watsky style.

It’s a difficult thing to describe — his creations are weird, heartfelt, usually vulgar, down-to-earth, funny, and often powerful. Watsky’s music allows for total honesty and lyrical freedom since Watsky himself is a talented rapper who can convey his complex thoughts with ease at a rapid-fire pace.

In the past, some of his songs have reflected on his struggles with epilepsy, explored the nature of death, inspired listeners to work hard, and even memorialized old middle school classmates who have passed on. If it matters to him, he’ll make something melodious out of it.

“Complaint” is Watsky’s successful attempt to use his art to be more honest than ever while simultaneously creating high-quality music. “Complaint” was intentionally shorter than the usual album, as Watsky wanted each song on the record to stand tall and be as great as possible, sacrificing quantity to increase quality. With the nine on “Complaint,” Watsky explores good and bad relationships, family, messing things up, and being there for friends.

The four best tracks from “Complaint” are listed here, but give them all a listen on Spotify, iTunes, or Google Play.

“Welcome to the Family”

This track, released as a single last year, is one of Watsky’s greatest. The tone is unpredictable, transitioning from comical to heartfelt at a moment’s notice. The lyrics are clever and heartwarming, greeting all people to Watsky’s musical family. Within this song’s breakneck rapping verse, listeners will hear words that, for me, define this entire album:

The second track of “Complaint” exemplifies Watsky’s ability to turn expectations on their head and still create something meaningful. “All Like Whatever” is an antihero for love songs everywhere. The layers of depth are hidden beneath a comical layer of sarcasm.

The chorus of the song starts off with “I think of you and I’m all like…whatever.” This recurring line is the surface level, but the verses of the song reveal that Watsky’s unnamed partner means much more than whatever to him.

The entire thing is a fun, groovy melody that subtly sends important messages about acting like your emotions aren’t as big as they truly are.

“No Complaints No Conversation”

The clearest connection between the album title and the songs within it is the entirety of this song. Featuring the same humorous sarcasm as “All Like Whatever,” this song is a string of various issues, problems, and complaints, juxtaposed by the chorus: “I’ve got no complaints and no conversation.”

Musically, its unpredictability is its biggest strength. Watsky always exceeds at changing the tempo on a dime, and he does so here, to the song’s benefit.

The takeaway of “No Complaints No Conversation” is open to listeners’ interpretation. To me, this song is about admitting the problems in your life, especially the ones you’ve caused, and choosing to live with them and look on the bright side, living with no complaints.

Continuing the welcoming and caring vibes from “Welcome to the Family,” this song is an offer to forget life’s struggles and go for a ride with a friend. There’s no denying the weirdness of the title or the song itself, but that’s half of the reason it’s fantastic. Facing turmoil, pain, or confusion, this song presents a safe escape from reality, in the limo for emos.

In the past year, Watsky has made a point to openly welcome listeners to his musical family, without changing his style to please the masses. Especially after the release of “Complaint,” Watsky has been clear that anyone who dislikes his album is welcome to do so. Express all your complaints, but Watsky is going to keep making his music his way.