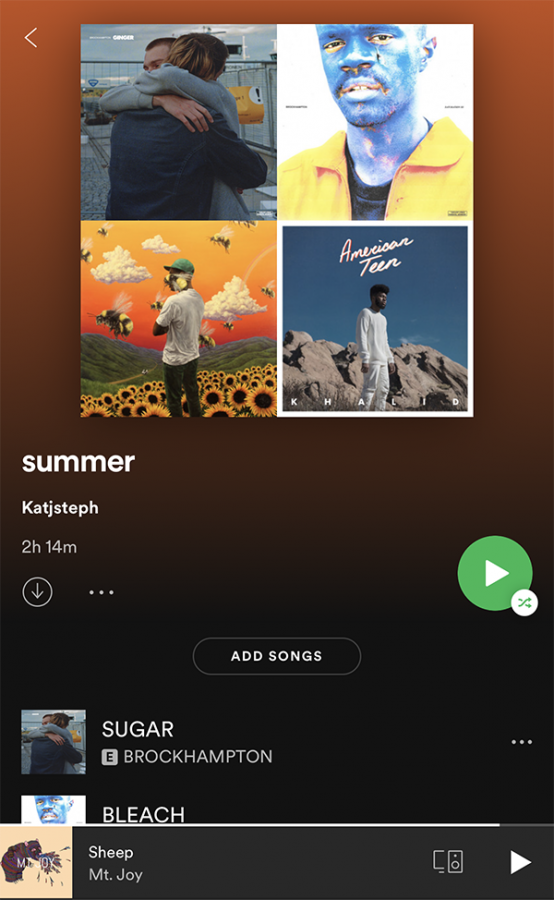 Now that the quarantine has passed, we all need songs to narrate the summer. I have picked my four favorite songs from my summer playlist to help those who are selecting their favorite summer songs.

Now that we can all finally stop stressing about school and fully wind into our summer selves, I hope these four songs will be featured on your playlist.

“SUGAR” has one of the best techno rap parts I have ever heard. I wouldn’t even consider it a rap song. The ending of the first chorus by vocalist Dom McLennon just completely gives me the chills because it’s so amazing.

BROCKHAMPTON is an alternative hip hop band formed in 2014. The group consists of six vocalists, six producers, and a graphic designer.

Because the song features four distinct vocalists it’s diverse in how different each part of the song is, but it still flows perfectly together. The range of the song is also different because of how many people sing it.

It is just the perfect song to play while doing any summer things like laying by the pool.

This song really got me into BROCKHAMPTON, but other songs by the band to consider are, “NO HALO,” “BLEACH,” and “FACE.”

The late singer, Malcolm McCormick, more commonly known as Mac Miller, had an album released in January 2020 after his death in late 2018. The album, “Circles,” is a great way to celebrate the life of the young singer.

Even though the beginning of this song is rather slow, once Miller starts rapping with the beat behind him, it is absolutely amazing.  The song is catchy and easy to just start singing to because it is somewhat repetitive but not in a way that makes the song bad.

Miller has always successfully placed meaningful lyrics in all of his songs. Even though this song was released after his death, the meaning behind it is still there.

“‘Blue World’ has Mac rapping about the trials and tribulations of life, and reflecting on all that has. On it he makes a subtle reference to his former girlfriend Ariana Grande, and the late Biggie Smalls,” Genius said.

Other than “Blue World,” songs by Miller that would be great to listen to this summer, include: “Self Care,” “Stay,” and “Come Back to Earth.”

“She Wants My Money”

Marty Krazz, known as Dominic Fike, is most popular for his song “3 Nights” but I have listened to that entire album and people should realize he has a lot of other great songs besides this one. “3 Nights,” was my go-to summer song in 2019.

The opening guitar part of this song paired with his vocals reminds me of driving around by yourself or with friends when it’s 85 degrees outside.

The song also features a couple of rap parts that also contribute to how great this song is.

Toward the end of the song he has an instrumental break, which normally I do not really enjoy, but in this particular song it contributes to making it great.

Kevin Parker started the musical project Tame Impala in 2007. Parker’s music is psychedelic but that does not make it bad. Although most of Parker’s songs are somewhat repetitive, I like this one much more than most of his others.

The instruments in this song greatly contribute to it, because it is a much more fast paced than most of his other songs, which is preferable on a summer playlist.

This song overall just makes me feel happy. It is one of those songs you just want to play while all the windows are down and you’re just driving.

Other songs to consider by this artist include, “The Less I Know the Better,” “Borderline,” and “Let it Happen.”