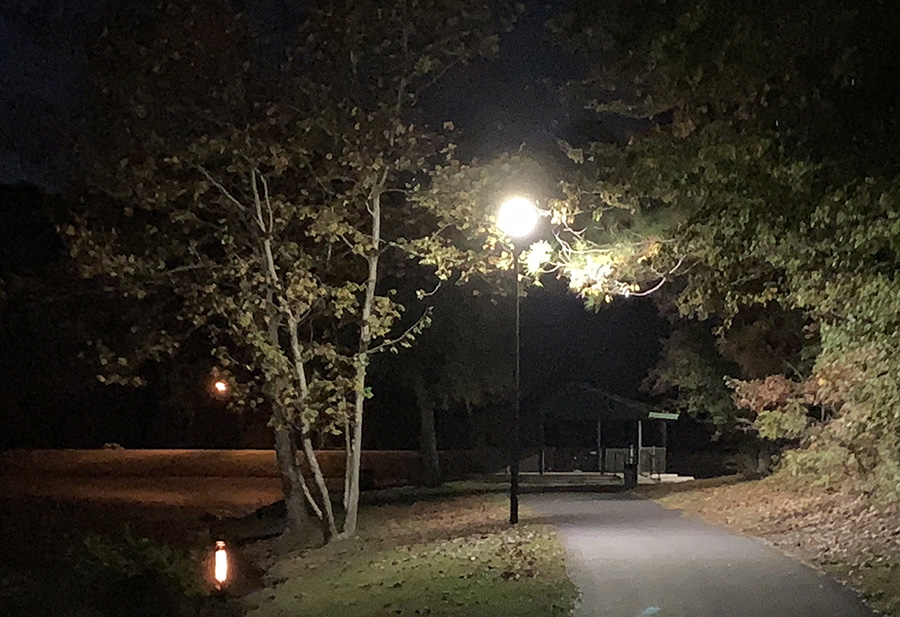 Everything I picture about November is darkness at 6 p.m., streetlights coming on, and every breath you take hurting your throat because it's so cold. Everything I picture is represented in each song I chose for the month of November as they take me back to a cold, dark night, and a yellow street lamp.

Every year there is a very weird time for music, November. Although party songs are a year round activity for friend groups, what about when they’re alone?

I am not a fan of any Halloween or spooky songs. November is the time of year when all those songs that I was die hard listening to, from the beginning of spring until around now, just do not bring the same joy as they used to, because songs have seasons.

I have songs in my playlists that I genuinely cannot listen to anymore because they are my summer songs. They give me that feeling of just lying on a beach somewhere feeling warm and stress free.

Then I make a switch to my fall songs. In Georgia, however, I can still integrate both summer and fall since it gets warm so often. As the leaves and temperature begin to change into a more permanent state, I have to listen to my winter songs.

November is when this switch normally happens, because it is right before the joy of Christmas and the stress of exams, but also right after the Georgia heat waves have finally stopped and my anxious anticipation for Halloween is over.

I picked a few of my November songs to explain why they specifically belong in this month.

The Neighbourhood’s “Sweater Weather” was released seven years ago and is still one of my go-to songs when the seasons finally change. It’s one of those comfort songs that just make you want to curl up in a pile of blankets and drink warm drinks while it rains, or when it is just too cold to go outside.

Although it does not have a slower beat, which most of my November comfort songs do, it just reminds me of ice-skating. It is upbeat but the line where it goes, “it’s too cold for you here, so let me hold your hands in the holes of my sweater” is what makes me think of ice skating. It makes me just picture two people skating and one of them gets too cold so they bundle up together.

It puts me in an excited mood for Christmas activities and just finally getting free time to spend with the people you love, whether it’s ice skating with a significant other or watching your mom’s favorite show on the couch with a bunch of blankets. It makes me picture all the things that typically go on in the holiday season — chunky sweaters, fireplaces, hot coffee at 8 a.m. and snow. These songs are just perfect for the winter, while also being a preferable November song.

“Get You The Moon”

The 2018 song was produced by Italian songwriter Kina. Although he wrote and produced the song, the vocalist in it is Snow. There is not much information on either artist other than their age, but that doesn’t take away from how good this song is.

Its slow and satisfying beats just leave me in an overall calm mood. It just makes me want to drive at night forever. It’s a sad love song, but it does not make me feel sad at all. It puts me in a relaxed, serene state.

Ella Marija Lani Yelich-O’Connor, better known as Lorde, emerged as a serious artist when “Royals” went big in 2013, but that was just the beginning of a successful career for her. When she released “Pure Heroin,” the main focus was the song “Royals,” but “Ribs” is arguably the greatest release she’s ever made.

The intro to this song is absolutely breathtaking with its gradual increase of volume in angelic harmonies until she actually begins singing lyrics. This intro just makes me feel like I’m flying, and nothing could hurt me. And throughout the songs, these harmonies continue and they make me feel nothing but happiness. Paired with the great lyrics, it makes me feel more alive.

It is more fluid in the season it belongs in. Although it belongs in winter, its debut should be in November. It’s a nighttime kind of song and makes me think of later season football games, the ones that are always cold. It places the image of a full car of my friends listening to this song, not really singing but put in the internal state of happiness. I imagine we’re all feeling so happy to be alive and it’s cold outside, so that helps put us in this grateful mood to be living and to be living with people I love.

“listen before i go”

Billie Eilish’s “listen before i go” off of her “WHEN WE ALL FALL ASLEEP, WHERE DO WE GO?” describes my entire November song playlist genre that I am going for. She released it in 2019 as her first debut album after releasing the EP ”dont smile at me” in 2017.

The song is very tragic when it comes to the meaning — she describes herself jumping off of a rooftop to see the earth before she dies. This song was written about a dream she had where she died and nobody cared, and she wrote one of the most heart-breaking songs out of it.

It is a rather slow tune which is also the type of song I normally listen to in November, but the way I feel while listening to it is a type of way no other song has ever made me feel.

In the beginning when she is describing the rooftop, I get chills immediately. She just puts an image in my head that is so vivid I can immediately picture where she is and the entire setting behind it. And in the setting she is around, it is dark, loud with city noise, and so cold she can see her breath. This is November to me — a cold night in a city, not snowing or decorated for the holiday season, just street lights and cold breath.

Vance Joy is most well known for his song “Riptide” released in 2014, but what’s most overlooked is how his other music releases are just as good as what made him famous.

“Take Your Time” was released with his “Nation of Two” album and the album is full of summer hits, but this particular song stands out to me as a November one.

It is extremely upbeat, unlike the majority of my November songs, but I consider the winter months to also be a time of love and warmth, which this song so accurately depicts. The one line “we’ll go dancing in the kitchen” just puts the image in my head of a couple chasing each other around with flour while baking cookies. It is an obvious love song, but it leaves me feeling so full of joy and ready to spend time with people I care about.

It gives me butterflies listening to it. I have never been a fan of Christmas or Thanksgiving, but this song, even without being about a holiday at all, makes me want to make cookies and dance with the people I love most. I may picture a couple in my head, but for myself I can picture my friends, my sister and even my cat, dancing around a kitchen without a worry in the world, knowing everything will be okay.

The month of November is the very beginning of a whole new kind of music for me. I have already been spending my free time listening to all my songs that belong in this season, and I have never been more excited.