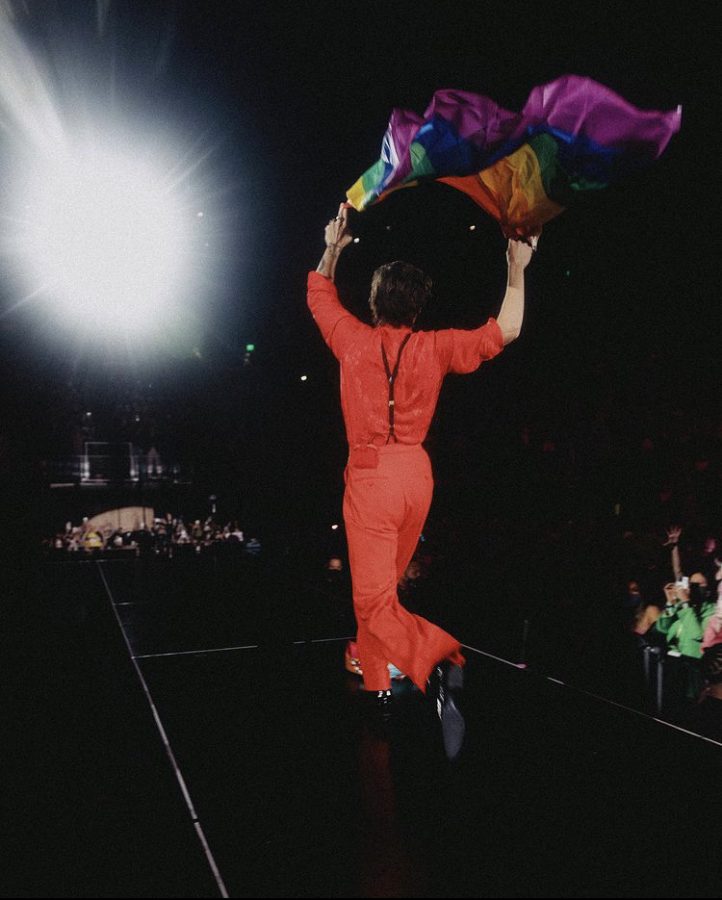 Harry Styles runs across the stage holding the Pride flag during his “Love on Tour” concert night in Atlanta. Being one of the real and true artists of this generation, Harry Styles has become an influence to people everywhere, teaching others to love and accept themselves for who they are through his music, wardrobe, and performances.

Most people, when they think of music nowadays, can only see artists who do not produce anything of their own and sell their voice for money. But what is it like to have an artist that truly values the art and creative process of performing music and creating it themselves?

Yes, there are a select few artists that you can see in the spotlight that do write their own stuff, and that number has started to grow. Harry Styles is one of those select few.

Harry Styles holds a true value for his music. Every song from his albums has been written purely from his own experiences and encounters. Through not just lyrics but the sound itself, his debut album “Harry Styles” was all about his freedom to express himself.

After years of being stuck in a boy band that was kept under a watchful eye for nearly five years, Styles’ first solo album was the perfect way to write something of his own. He was finally able to be creative and create melodies and lyrics of his own.

Two years later, he released another album titled “Fine Line.” It was one that meant more than just freedom to express yourself. Instead, “Fine Line” was his way of writing something of his own meanings. It was not meant to be relatable or something for fans to latch onto. The album was meant to be something for Harry Styles to pour his heart and soul into.

When writing an album, most artists tend to focus on how their audience will react to it and if it will be something their fans can connect with and relate to. Harry Styles has done just the opposite of that, and it can be seen in both “Harry Styles” and “Fine Line.”

Not only does Harry Styles find freedom in music, but in clothing as well. While it may seem like a minor thing, one of the greatest ways a person can express themselves is through their wardrobe. While he obviously is not the first person to break gender roles in clothing, Harry Styles is one of many who is continuing to shatter said roles.

From wearing a Gucci blazer overtop a Gucci layered dress for a Vogue article to donning a brightly bejeweled Dorothy costume for the Halloween-themed leg of his “Love on Tour” tour, Styles’ clothing and wardrobe is anything but boring.

With multiple other accounts of Styles’ incredible outfit choices, anyone can see his love for creative expression. This love then bleeds through to his fans. As can be seen at his concerts, especially “Harryween,” a Halloween-themed party and concert all in one that took place in New York earlier this week, Harry Styles’ fans are exceedingly creative and just as expressive as Styles himself.

An artist that values the audience and the performance is another trait in creators that not a lot of people have seen recently. Harry Styles does just that.

As can be seen in videos and photos circling around social media from Styles’ recent touring, he does not just perform because it makes him money. He truly values the people who spend their money and their time to come out and see him perform.

Every fan gets their own concert experience, different from other states and other nights and Harry Styles prioritizes this. In every performance not only does he attend to the crowd and make sure they are okay, but he also wants to have fun.

Styles makes sure that each fan is having the best experience possible and entertains the crowd to his best ability, and it definitely makes a lasting impression on each person who attends.

Not everyone in this generation feels safe and secure in who they are. Harry Styles has been one of the greatest influences to many people, especially in influencing others to learn how to love themselves and not feel self-conscious about who they are.

Harry Styles has become a beacon to this generation. One of freedom of expression and the ability to love themselves and others. Through each and every one of his values, from his music to his performances and especially his clothing, every aspect of what Styles does, exudes self-creativity, the biggest step to being a true artist.